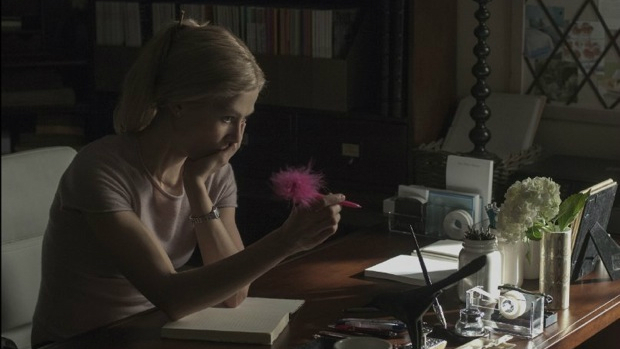 Gone Girl‘s plot in one sentence: dunce-ish Nick Dunne (Ben Affleck) is the prime suspect when wife Amy (Rosamund Pike) disappears; halfway through it’s revealed he’s been set up for her murder in a fiendishly well-plotted revenge for his infidelity. The pivot point for Gone Girl arguments is whether “Amazing Amy” is merely an anomalous sociopath in a self-contained story or whether she stands for All Women and heavy-drinking adulterous dullard Nick is All Men. If that’s the case, it doesn’t matter that an innocent man is set up for capital punishment by a vindictive person (which is awful and plays into misogynist tropes about crazy scorned women) — the retribution fits the larger allegorical crime. The initial mystery of What Happened allows readers time to decide whether the most probable explanation for Amy’s disappearance is female malevolence or male rage.

Flynn’s novel dawdles between twists, dropping in to spend extended time in both characters’ appalling headspaces. Amy’s detailed repugnance at Nick’s slovenly heavy drinking, carelessness et al. seems as justified as his amazement at the all-consuming depths of her misanthropy. She hates everybody equally across all class structures: Manhattan’s wealthier wives and less assertive midwestern manners are both equally dismissed in a few ostensively pithy generalizations. No one is ever greater than the sum of their categorizable external appearance, and everyone can be picked apart for something. The “real” Amy is only slightly more judgmental and unpleasant than her diary’s fake persona. She is, essentially, a velociraptor we’re supposed to empathize with just because she’s at least imaginatively effective at torturing others, whereas Nick is a useless waste of privileged space.

In Fincher’s rendition, the amount of time given to serious ongoing rancor is diluted, the extensive digressions on the pathologies manifested and imposed by both spouses’ parents pruned and backgrounded. Instead, Gone Girl rushes through the windup, plunging both partners into a never-ending series of situations they must quickly adapt to. Rather than sitting around brooding about how he wants to kill that bitch and being shellshocked anew by each of Amy’s traps, Nick gets a lawyer sooner rather than later. His primary business is dealing with the press, and there’s never a dull moment; comedy comes from the hurried verbal negotiations accompanying each twist in the story. It’s more tell than show, which amounts to the same when all that matters is the perceived credibility of a speaker, as defined by their adhering to the rules of appropriately phrased public remorse and regret.

Amy is kept similarly harried; the montage where she explains how she pulled everything off is this film’s equivalent of The Social Network‘s Facebook-creation sequence, speedy thought translating into action with no pause for reflection on the broader implications. Even if the thrust of Flynn’s book is more Gender War allegory than “this is what happened to one person,” I’d have trouble being able to find the two spouses equally indictable, for a simple reason: only one of them sets the other up for the death sentence as administered by the state of Missouri. But Fincher’s version of Flynn’s self-adaptation tones down the cause-effect in her reactions a lot, which turns this into a bizarre Tom and Jerry saga, with the unbalanced predator-pray relationship firmly calibrated. Rather than trying to tamp down the more ludicrously lurid twists, Fincher plays them up for laughs: there’s no other reaction for the sight of a blood-drenched woman emerging from her car on a driveway to widespread applause from members of the media.

However, if I were inclined to try to extrapolate some kind of larger argument, I’d point first to an odd moment when Nick meets with Tommy O’Hara (Scoot McNairy), another man done wrong by Amy. In the book, Nick also meets with a woman equally set up and slandered by Amy, establishing that her sociopathically-enabled vengeful tendencies aren’t for men alone. Here, the only person around to confirm how terrible Amy is a man who had false rape charges (he says) filed against him, and the two bros bond instantly against The Woman Who Was Automatically Believed. This is an uneasy scene, because it’s about how two men automatically take each other’s word over a woman’s; the narrative vindicates Nick, but does that automatically mean Tommy is telling the truth?

A scene like this, whose precise truth value is hard to pin down, undermines the idea that since Amy’s POV is rendered subjectively in voiceover flashbacks subsequently revealed to be mostly fiction, the voiceoverless Affleck sections by default become the “objective,” unquestionable parts of the narrative, thereby tilting the film’s sympathies unquestionably in his favor (and, by not-so-massive extrapolation, in that of all men). This unease about who’s narrating/lying pops up even in Amy’s fiction; when angry Nick pushes her backwards and her head gets knocked against a stair’s railing, it’s caught in awestruck and emotionally phony slow-motion. Such intrusive overemphasis calls into question the veracity of what we’ve just seen, even before it’s revealed as a construct, as if a skeptical male was listening and insisting that something feels off and that this man simply couldn’t have done that. Nick does become, in the final scenes, the momentarily abusive, shoving man Amy painted him to be; he’s ultimately capable of exactly what everyone (wrongly?) assumed he’d done.

The night before seeing Gone Girl, I saw Alain Resnais’ (great) Mon Oncle d’Amerique, a narrative about three people’s intersecting paths accompanied by explanatory voiceovers from biologist Henri Laborit, occasionally granted a lecture direct to the camera to drive home his argument. In his book Decoding the Human Message, Laborit argues that “what we call freedom amounts, generally speaking, to the ability to respond to our primitive drives, which are already considerably alienated by the automatisms, prejudices and value judgments of the social group and of the epoch in which we are integrated.” Interviewing Resnais about Mon Oncle in 1980, Jonathan Rosenbaum asked whether the characters would be happier and better off if they were aware of and able to combat the drives and social conditioning that led them to make poor decisions by constantly introducing aggression as a form of attempted control in their personal and professional relationships. “Yes!” Resnais answered, taking as his example a potential reconciliation that ends with the offended man walking away from his former lover. “They aren’t at all conscious of dominance or aggression; they never think about that — they just react. If Jean Le Gall (Roger-Pierre) knew the rules of the game when he has been humiliated by Janine Garner (Nicole Garcia) […] maybe things would be different. But the only thing he can do, since he has been dominated, is to try to dominate her.”

Gone Girl‘s Nick and Amy have the exact same problem: they “just react,” both conditioned by toxic ideas about gender roles and relationships they never stop to interrogate. Must marriage be mutually negotiated self-destruction? Events which acquire their own inevitable momentum here could be stopped by a modicum of mutual self-respect and reasonableness, but that option’s off the table, though I’d hesitate to extrapolate so much from a narrative whose main value is the speed of its telling rather than the bizarre details of its trajectory. This is a faultlessly speedy work, slicing and dicing scenes into their most pertinent details in quick close-ups and quicker conversations. In the many long dialogue scenes, Fincher finds a dozen or more angles that go way beyond shot-reverse shot to keep your eye constantly straining to keep up and mentally suture the fast-changing new perspectives to the consistently sped-up dialogue. (Those angles are surely enabled by those infamous 50-takes-per-scene, which are precisely what allow this kind of visual crackling; it’s a totally justifiable means to an end.) I’d love to watch it again, but I’m not sure there’s much to take ideologically from Gone Girl; no one should be proud of anything we might learn about ourselves from this.