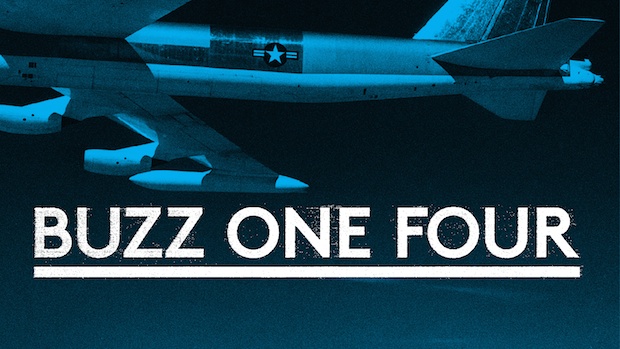 Filmmaker Matt McCormick penned the following essay, published in conjunction with his Kickstarter campaign for the documentary Buzz One Four. Visit Kickstarter for more information, and consider making a donation.

It’s true. My grandfather nearly blew up the entire eastern seaboard, or at least the area spanning from Washington D.C. to roughly Philadelphia, or maybe even New York, depending on which way the wind was blowing that day. But then again, it all depends on whom you ask. Air Force officials claim that there is no way the two 9-megaton thermonuclear bombs on board the B-52 bomber my grandfather (accidentally) crashed into the side of Savage Mountain could have detonated. But nuclear watch-dog groups counter that we were all very lucky when those bombs, which combined were over 1,000 times more powerful than the bomb dropped on Hiroshima, did not detonate in the fiery crash that snowy night in 1964. But one thing that just about everyone is in agreement on is that the crash could have been prevented had the Air Force fixed a known structural weakness in those massive bombers.

But let me back up. My grandfather was a career Air Force pilot. He was drafted into WWII but then elected to re-enlist after the war. He was a pilot, a good pilot, and wanted to be a fighter pilot. But he was too tall to fit in the fighter planes (those who know me will laugh) so he became a bomber pilot. As WWII transitioned into the Cold War, the Air Force commissioned Boeing to build an aircraft capable of taking off from an American base and carry a heavy payload (aka a nuclear bomb) all the way to Russia. They succeeded, and the B-52 was ushered into service. In the late 1950s, an airborne alert program was initiated that had nuclear armed B-52s in the air 24 hours a day, seven days a week. These planes would take off from U.S. bases, fly “attack profiles” towards Soviet targets, but then divert just before entering Russian airspace. By 1960 no fewer than 12 of these bombers would be in the air at all times, with the idea being that we would never be more than 30 minutes away from being able to nuke Russia.

My grandfather was one of the first generation of pilots selected for these missions, which came to be known as Operation Chrome Dome. He and his crew would take off from their base in Albany, Georgia, fly over the Atlantic and Mediterranean, and then once over Turkey they would check their attack codes, and if they came back negative they’d turn around and fly home (If this sounds a lot like Dr. Strangelove, you’re right. Just imagine my grandfather as Slim Pickens).

There are many, many head-scratching details concerning these missions (like for instance, crystal-meth as we know it today was pretty much developed by Air Force scientists specifically for Chrome Dome pilots to help keep them awake during these 28-hour missions) but you’ll just have to wait to see the movie to hear about. One night in January of 1964, my grandfather and his crew were returning from their Chrome Dome mission and flying down the Eastern seaboard when they encountered a nasty winter storm. A strong wind gust tore the rear stabilizer completely off of the plane, leaving it completely out of control as it hurled at 550 mph at 31,000 feet. My grandfather ordered the crew to bail out, but in the end only two of the five crew members survived. The plane, and the two nukes, slammed into the remote countryside of Western Maryland. This was the fourth time that year that the tail of a B-52 tore off when it encountered heavy wind. The Air Force was so aware of the structural defect that they had even created a training film for pilots instructing them what to do in such a situation. But somewhere up the Air Force chain of command it had been decided that an occasional crash, and the likely casualties that would come with them, were more acceptable than the cost of grounding the planes and fixing the problem. “Acceptable loses” is the term for this sort of mentality. I could go on and on (and on).

This is a wild and complicated story that I have only touched upon in this essay. There was the tragic impact this had on the families of the crew-members, but also a heroic rescue effort made many of the locals who lived near the crash site. And then there is the larger history of other nuclear weapons accidents (aka Broken Arrow events) that can leave one wondering if we were in greater danger of nuking ourselves than being attacked by the Russians. The crash remains classified, and the Air Force continues to suppress information about it, but obviously it is a story that I grew up with and have some intimate knowledge of. For the most part I had forgotten all about it until the fall of 2013 when I happened to be traveling in the area of the crash. I did a bit of research, asked my dad a few questions, then suddenly realized an amazing film was waiting to be made about this wild piece of secret history. I’ve been working on it since.

One of the biggest challenges facing production of this film is the fact that the event took place over 50 years ago, which means that those who were alive during the time of the crash and have a living memory of it are getting up there in age. While I have applied for several grants and am looking for direct funding as well, I’ve turned to Kickstarter to help finish production in a timely manner. I would be thrilled if you clicked over to the Kickstarter page (where you will find even more information) and consider making a donation.