Paying your Subjects and other Notes on Morals, Ethics, and Aesthetics in Documentary Filmmaking in the Developing World. 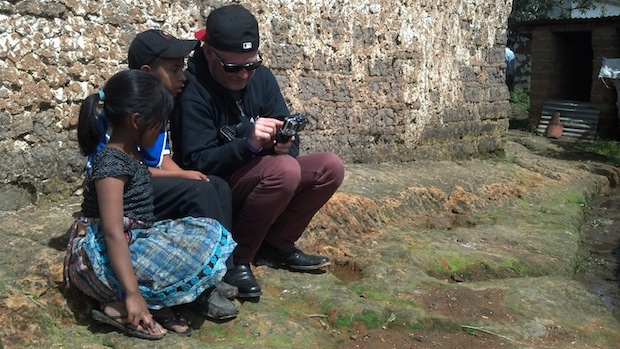 Ricardo Gaona is in the final days of a crowdfunding campaign for his feature, Parque Central, on Kickstarter. Visit his Kickstarter page for more information and please consider donating. — Editor

Nonfiction filmmaking is hard work. There are the technical aspects, of course, and (especially right now) the financial concerns that can make you lose your mind a little bit. In the case of our film, Parque Central (now funding on Kickstarter!), which follows children who work in a park in Antigua Guatemala, there’s an extra level of stress that comes with the questions of ethics and representation. I’ve got some tips that this experience has taught me that might help guide you through tricky waters on your own projects.

Let’s get something out of the way: when you make a documentary, you are absolutely exploiting your subjects. There is no way around that. There are, however, degrees of exploitation.

Be an observer. You are telling a story about people and making a film about people. You don’t need to goose things to get what you want. Don’t be that guy making a film that screams, “LOOK POOR PEOPLE OMG HOW HORRIBLE” with the strings building to a swelling crescendo. Never forget that people are people. People aren’t a social issue. Although you may have the best of intentions, reducing people to a social issue is crass and cynical. People doing what they must to makes ends meet deserve to be celebrated. Do that. Celebrate them while not letting your camera shy away from their reality. Their survival is a triumph.

The moment we knew we had a film wasn’t when Domingo rolled a tarp across the concrete floor to go to sleep, it was the next day when he was taking a break from selling ice cream to play soccer in the park with the other kids that work there. It’s those moments of light that matter the most. You shouldn’t need to manipulate people and crassly exploit your subjects to get that across. Be mindful that you are bringing with you your own life. While it’s impossible to forget your own life, your own world, do your best to do that. There is no quicker way to judging people than by forgetting where you come from and what defines your daily life. That’s your life, not theirs.

Further, dwelling in the darkness is dishonest. After spending a lot of time with Domingo and listening to him talk we learned that his true sadness comes from missing his family that live a few hundred miles north of him. Never once did he mention how shitty it was to sleep on a tarp. When we asked him if he gets cold, he smiled and shrugged it off. He always went back to talking about how his greatest struggle is being separated from his family. He wasn’t bullshitting us or giving us the answer that gringos wanna hear, we learned that when we went with him to visit his family and got to stand in the background and watch them exist in those moments as a happy unit.

Don’t talk, listen. By adopting an observational style, you’ll be making something that isn’t a 60 MINUTES episode. If you can learn what you need to from a magazine article or Wikipedia page, don’t bother making a film. Always think, are you making a film or Sparks Notesing a book? Unless you want to get into Sundance, where all that may actually help your case.

This isn’t your story. It is their story. Get out of the film. Let them speak. No one knows what their day to day life is like more than the person living it. If you want to find out how colonialism and US interventionism led to where they are, talk to the experts and then write a book. Go to experts that are from where you’re discussing first before you talk to some white Harvard professor about the problems of a country he has no real connection to.

You’re not in America. Believe it or not, people from different places are different than you are. Learn as much about their culture as possible before you go. And then make sure you have a local guide (producer) that understands the people and place that you can consult before you prove yourself to be that ignorant American stereotype we all are saddled with (for a pretty good reason). You might get stoned out of town. Literally. We almost did.

Paying people is okay. Look, you aren’t a journalist, you’re making a film. Make a film. People always talk about journalistic ethics when it comes to paying people, and, frankly, while that is extremely important in journalism, that doesn’t work for me here. I have a moral problem working with people that are impoverished (that are losing money when they are working with us) and not paying them while I am making something that potentially could generate revenue. Pay people. What they are doing is work. No matter which way you shake it. They are working… and just as the unpaid intern is a bullshit idea in this country, so is not paying your subjects for their time. And, believe it or not, you might actually help them get a little out of a hole in the long run. Just don’t start paying subjects to do things that are dishonest. That’s when you start violating an ethical line. It was the first conversation we had after booking the tickets for our first flight South and there’s not a thing about it I regret.

Don’t have an answer to your question. You should seek it as you create the film. That should be its purpose. Paying people is fine. Staging things is fine. It’s all about seeking a larger truth. If you can find one but you are fudging small (what I’d say are insignificant details) to get there, okay. For example, a lot of the kids we are shooting play soccer together. We are just moving the pitch to one in front of some crumbling ruins because that says so much about what we have observed. One shot says practically everything. I see no problem with that.

You will spend a lot of time trying to figure out what the fuck you are doing. The first several days we were wandering around trying to find our subjects and, basically, our film. Problem is, no one trusted us (even with our local producer). We knew we wanted to make a film about shoe shine kids in Antigua, but they didn’t want anything to do with us, much less our film. Then, one night, at a bar (going out and socializing with people is important… drink up, Johnny) we got hooked up with a guy that worked with the kids in the park. The next day he walked us into the park and the kids came straight to him. They trusted him. And, in effect they trusted us now. Kids that wanted nothing to do with us, suddenly were flocking to us. This leads to an important responsibility…

Trust. You will enter places in which you don’t know what to do with the trust you are given. You might get something potentially controversial or damaging for your subject, but they’re a child and you’re not sure they are aware of the implications. Will it paint a more complete picture? Of course. Will it make the film better? Possibly. But if there’s any doubt at all, it should be carefully considered. When the subject has graciously agreed to open themselves up to your camera, you should never take advantage of that trust, especially if there are potentially serious repercussions for them.

All of these issues are important to consider, but don’t let a fear of getting something “wrong” discourage you. The more you think about your approach to your project, the better it will be. So embrace the difficulties and good luck. As Ms. Taylor Swift once said, “Life isn’t about how to survive the storm, but how to dance in the rain.” Truer words, Tay. Truer words.

If you’d like to know more about our project, Parque Central, I’d love it if you could check out our Kickstarter campaign that we’re running until November 7th. We could use the support to finish up that last leg of the film!

Ricardo Gaona is a Los Angeles-based film school graduate who made a short film that played in the Cannes Short Film Corner. Worked in the film industry in various capacities before deciding to abandon the industry and work in catering to make films independently and obsessively aim for Criterion completism. Dedicated to making films about people and places often forgotten about in the cinematic universe. Likes the pier, hates the beach. Violinist and punk enthusiast, whilst at 33 years old is openly a Taylor Swift fan. You can find him on Twitter at @spinenumber408