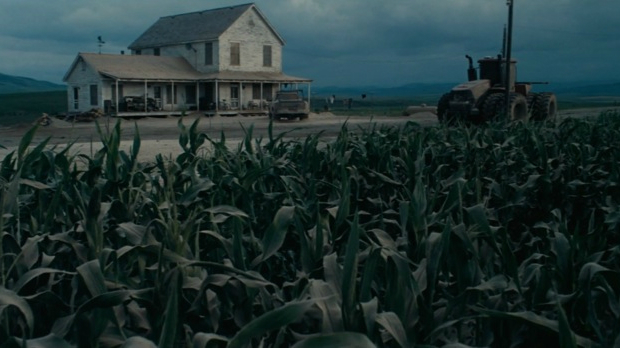 In Interstellar‘s future, a life-ending new Dust Bowl requires astronaut Matthew McConaughey to go into space, shoot through a wormhole, scope out three planets for habitation and make it back home to assure his daughter he loves her. The film is bookended and periodically interrupted by real Dust Bowl veterans’ talking heads, their hard times testimonies taken from a Ken Burns doc on the topic. It speaks to Christopher Nolan’s admirably idiosyncratic instincts that he’d ground visualizations of near-mystical journeys through quantum physics with seemingly incompatible Burns talking heads; it speaks simultaneously to his imaginative limitations that he can think of no better way to contextualize his work.

I take Nolan semi-seriously, at least enough to wish he was better; he’s got some moves, two pretty faultlessly entertaining films in The Prestige and The Dark Knight, and certainly an idiosyncratic enough agenda. As Mike D’Angelo has succinctly outlined, Christopher Nolan’s major, none-too-subtle recurring concern is demonstrating that we live in a universe whose workings can be explained in rational terms: he makes blockbusters for militant atheists. Interstellar adds a hefty amount of quantum physics to the mix, first as exposition, then visualized. Granted basically unlimited resources from the studio coffers, Nolan thinks it’s essential that he deliver talking heads first explaining in 70mm how a wormhole works before the obligatory big f/x showpieces, an allocation of resources I find both charming and frustratingly symptomatic.

I may not read a more bemusingly maddening sentence from a director this year than Nolan’s explanation of why The Thin Red Line is one of his Criterion Collection top 10 picks: “What better than Malick’s extraordinary vision of war to demonstrate the technical potential of a carefully mastered Blu-ray?” It’s clear Nolan as viewer has patience for the ineffable — hard to imagine a Thin Red Line or 2001 admirer who didn’t possess a capacity to admire that which can’t be fully articulated — but what a comical comedown in the second half of that sentence, such a rational explanation for his pick just in case you doubted his preference. Part of the reason you can trust Nolan with final cut is because he’s similarly always guaranteed to not go well and truly off the reservation and pull a Southland Tales. An admiring New York Times profile had Nolan explaining how he thinks about how much hand-holding the audience needs vis-a-vis his development of The Dark Knight: “Execs are very good at saying things like, ‘What’s the bad guy’s plan?’ They know those engines have to be very powerful. I had to say: ‘The Joker represents chaos, anarchy. He has no logical objective in mind.’ I had to explain it to them, and that’s when I realized I had to explain it to the audience.”

There’s an analogy in the P.G. Wodehouse short story “Jeeves and the Chump Cyril” in the personage of Broadway producer Pop Blumenthal, who cuts entire numbers and sacks performers on the advice of his adolescent son’s dislikes. A frustrated playwright explains Blumenthal’s thinking: “he thinks the kid has exactly the amount of intelligence of the average member of an audience […] what he doesn’t like will be too rotten for anyone.” In exchange for delving into rationalism and its discontents, Nolan has to make sure that he doesn’t lose anyone along the way on the psychological side, which makes for some perverse tradeoffs. Fully comprehending Interstellar‘s climax requires familiarity with the idea of a tessarect, which remains unexplained (Wikipedia articulated it for me), but it’s essential that a fourth-act character explain fully and repeatedly that he represents how the human race’s selfish desire for preservation of self and family trumps concern for the broader survival of the species. Noted in passing: that fourth-act character is named “Mann” (remove the extra n) and McConaughey is one “Coop” Cooper, because when he’s not an astronaut he’s cooped up. Such infelicities are legion.

From the tripod-less chaos of Batman Begins, Nolan graduated to the Heat-ripping slow helicopter drifts and fast Steadicam glides of The Dark Knight, attaining a good measure of his own propulsion in the process. His current look has its limitations, but at least it’s a semi-efficient system: shallow-focus tracking shots from behind and to the side of people, rote but crisp symmetricities, straight-line trajectories through very large sets and outdoor locations. At Interstellar‘s outset, I was entranced for a while by the newly novel sensation of watching a huge studio blockbuster film shot and projected on film, evident grain its own reward for the celluloid-fixated. Nolan has taken a lot of flack from detractors for being a visual journeyman whose attraction to 35mm makes no sense considering how little use he ostensibly makes of it, which is unfair: if he couldn’t see the grain and palette it offers, he clearly wouldn’t fight so hard to keep it on the table. A repeatedly returned to sequence has a pickup truck driving through a cornfield, and it’s unquestionable that we’re watching a real vehicle cut real tracks through a real location. Tangibility in a particular textural idiom has its own pleasures. And there’s more: less than 10% of the film’s spacecraft shots were digital, with 150 achieved using miniatures. The difference pays off: those are real objects rotating and real beams of light hitting the lens, with a crisp linearity CGI hasn’t assimilated yet. (It should be noted that the extensive CGI water is easily the best I’ve seen, a feat worthy of a minor merit badge in its own right.)

Tech achievements duly noted (and their scale is certainly not nothing), I’m drawn back to Nolan’s 2001 fixation, unveiled to truly embarrassing effect in the dire, airless Inception, with Old Leo In A Mystic Room At The End of the World nodding beyond clearly to the source inspiration. Here, Nolan can be more directly allusive at greater length, truly delivering with two neato space trips — worm/black hole, each a super-scaled light show — and more frustratingly through Hans Zimmer’s score, with a big pipe organ repeatedly sustaining C major, suggesting, without having the guts to commit to, “Also Sprach Zarathustra.” But Nolan could never make 2001, because the inexplicable is out of his purview. Interstellar is his 2010, the less-loved 1984 sequel which has its own inadvertent pleasures, not least of which is its dogged commitment to explicating the previous film by making clear what drove HAL 9000 over the edge and allowing Dave Bowman to come back, not to stare in terrified wonder but to provide a good deal of exposition. Through scale and speed, Interstellar‘s first half builds enough beyond-human momentum to sustain a not inconsiderable amount of entertainment value — but when Mann appears to explain man, it collapses under the weight of a repeated thesis that doesn’t merit such explicit, redundant reiteration. It’s Nolan’s charm that he’d take all the money offered to, say, stage a large-scale demonstration of the “Prisoner’s Dilemma” in The Dark Knight, and an indication of his limitations that this is an example of the biggest spectacle he can imagine.