I discovered a couple of excellent posts at the Coffee and Celluloid blog that will help you if you are contemplating or in the process of a crowdsourced funding campaign through a site like Kickstarter or Indiegogo. Written by Joey Daoud, the posts chronicle his experience researching and enacting a campaign to raise $9,000 for his documentary on high-school combat robots, Bots High. The campaign was successful — he raised $9,100 — but, as always, the devil is in the details. In the first post, “How to Figure the True Cost of a Kickstarter Project,” he breaks down not only the cost of the commissions (5% to Kickstarter and about 3% to Amazon) but also the costs involved in manufacturing and distributing the various rewards he offered to his supporters. In the second post, “My Kickstarter Experience — the Good, the Bad and the Ugly,” he deconstructs his own success, revealing that he had to appeal to a relative for a loan in order to push himself over the $9,000 barrier and not lose all the money pledged so far. He’s also drawn conclusions from the experience, such as that he should have come up with a lower goal, like $5,000, and that it would have been easier if he had gotten on a high-profile blog. File Daoud’s account next to Miao Wang’s on her Kickstarter campaign and you’ve got a running start on most people launching projects there.

While I’m discussing Kickstarter I’m going to throw some attention on a project I’ve been hearing about for a while from trusted sources, Todd Chandler’s Flood Tide . Here’s how the filmmaker describes it:

Flood Tide is a road movie on a river. It tells the story of four musicians who create extraordinary boats out of ordinary junk and set out for open water, fueled by dreams, desperation and a sense of adventure.

The film’s quiet narrative unfolds through fragments of memories, songs, letters and diary entries. Characters played by non-actors from the bands Dark Dark Dark and Fall Harbor chase jobs, dig through the past, and eventually, float out of town. They drift past empty new condo developments, anchor to explore crumbling castles and swim in iridescent green quarries. They get stopped by torrents of rain and groaning, broken down motors.

Flood Tide follows an unpredictable voyage down a strange and meandering river, a search for a new life along a polluted estuary that flows both ways.

Donate via the link above or the widget below.

Finally, it’s important to note that you don’t need a crowdsourced funding site to crowdsource production funds for your movie. Filmmaker Maria Beatty is raising $50,000 for the production of her latest feature, Cafe Du Diable, via direct PayPal donation. She also recently staged two fundraisers, one in Paris and one in New York at the Slipper Room. Here’s her description of her film: 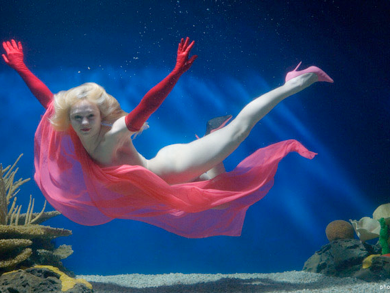 The stories in Café du Diable will cover this emotional waterfront. The journey to the madness of the outside world and the madness within each of us – equally reflective.