True/False 2015: Rules of the Game, Spartacus & Cassandra and I Am The People 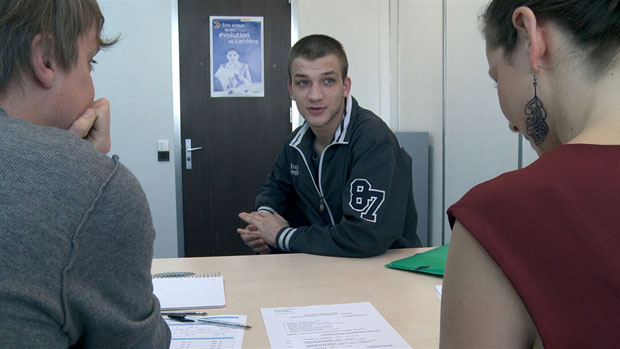 Rules of the Game

For once my favorite movie of True/False 2015 was an honest-to-goodness crowdpleaser, a counterintuitively funny film on a grim topic. Claudine Bories and Patrice Chagnard had the earned gumption to title their film Rules of the Game; in French it’s distinguished from Renoir’s film by the first word being Les rather than La, but that distinction doesn’t translate. It’s not just a cutely attention-getting appropriation: Renoir’s film anatomizes unspoken codes of conduct for French high society which, if observed, should successfully conceal hypocrisies and personal betrayals. Bories and Chagnard’s reworked title refers to clothing, eye contact, portfolio neatness and other job interview variables that — rather than work ethic and qualifications — are the true criteria for “employability.” There are class divides built into the knowledge gap between the person with hiring power and their supplicant: that sneakers aren’t to be worn, even if they’re the proper attire for the task in question, or that the first 13 seconds determine the interlocutor’s impression fatally. This kind of corporate wisdom drives me off the wall — if it were truly the end-all be-all, I’d be on the dole for life.

Rules situates itself almost entirely within a regional branch of the Ingeus agency, whose role is not to increase their clients’ skill set but their superficial hireability. The office tower is located in an industrial wasteland that’s very Slough in The Office — smoke in the air, a few similarly ugly buildings and little more, a typical example of where people must go to pretend to be inspired. There’s a degree to which presentational skills very much matter: any employer would be justly alarmed to hear from a prospect, re her school days and a troublesome classmate, “I stabbed him in the eye with a compass. I told him what I think.” Yet oft-angry Lolita has done a score of culinary internships without landing a job; she diligently follows her counselor’s advice, and still scoring a slot at KFC is difficult. Will and skill count for little in a kind of unpaid internship with no clear end in sight.

The job-seekers all have their presentational weaknesses: Kevin knows well that “I’m motivated but I’m no good at talking,” not that the post he’s pursuing has anything to do with verbal aptitude. For another client, it’s a no-no to say the best position he ever had was the one that paid the most; it’s one of the most infuriating paradoxes of mass capitalism that worker and boss must lie to each other about their respective motivations, often in inverse proportion to the wages offered. Those wanting to be hired are clear about themselves, immensely sympathetic, and a source of natural comedy through their frequent bewilderment. The employment agency people similarly seem sincerely invested in their charges’ success and blessed with stereotypical French bluntness in not beating around the bush — they’re preparing their clients for the evasions further up the ladder. The camera often aligns us with the trainers’ POV so that viewers become employers evaluating signifiers that don’t really matter. That’s what hypertrophied capitalism does, and that’s a problem.

Iaonnis Nuguet’s feature debut Spartacus & Cassandra is another French documentary about a different type of power imbalance, that between needy parents and helpless children. Spartacus is 13, Cassandra 10; their mother is, in the son’s diagnosis, crazy, and their father’s basically MIA, an occasional alcohol-soaked presence intent on taking his children to Spain with no plan beyond that. In what he regards as keeping with his Roma roots, the best Spartacus can conceive of is street life, and the prospect of being homeless with his family makes his typically hostile face light up in heartbreaking fashion. For now, both siblings are under the supervision of 21-year-old circus performer Camille, an ad hoc caretaker with doubts about how much longer this arrangement can go on. “I’m young,” she tells a judge. “Sometimes I think I’m not capable of raising children.”

Spartacus and Cassandra are uneasily caught in a custodial triangle between Camille, their unreliable parents and the prospect of foster care. The main throughline is Spartacus’ immense and understandable frustration: he’s one of those impossible problem children whose acting out is as understandable as it is counter-productive. It’s no use telling him to start going back to school, study hard and pull himself up by his bootstraps — he’s already been molded and always wants to go wild. Much of Nuguet’s film is careful observation of the many conflicts Spartacus instigates or observes: difficult phone conversations with dad, standoffs with exasperated Camille, sessions in children’s court, the camera close enough to be another observant that wants the best.

Direct intervention comes in segments separable from the observational bulk of the film. The opening images give a simple circus scene a bit of magic simply by holding the camera upside-down, rendering performers’ shadows on the ground right side up and restoring temporary balance to the world. Nuguet collaborates actively with the kids when the film finds relief from tense vérité, giving them dual voiceovers for which Malick comparisons are inevitable and, for once, probably not off-base. Maximal relief is obtained in a countryside retreat: “Camille said we could use a break,” Spartacus says in voiceover, as all tensions in the city are, if not dissipated, for the moment ignored, and bonds of real affection restored. (This is partly a film about urban children learning to love rustic life.)

This rural idyll state of affairs is too good to last — a recurring motif is the pain ensuing when parents demand emotional support from their children but are incapable of reversing that flow. Spartacus & Cassandra ends on a deliberately unresolved note, with Spartacus grabbing the end credits mic for a hip-hop number to express his perpetual agitation as a Roma always outside looking in on French society. He’s a young casualty of a much larger political issue that’s acknowledged but not explicated, and his parting shots are an unambiguous kissoff to all who’d tell him where his correctly assimilated place is: “One day you’ll hear a voice that you will not be able to ignore.” Spiking its patient observation with right-side-of-lyrical interludes, Spartacus & Cassandra started bumpy but won me over with its long-haul commitment to the siblings, ability to not flinch in the face of raw pain without sentimentalizing it and careful balance of the recorded and constructed.

I’ve rarely seen such direct and constant interchanges between subject and documentarian as in Anna Roussillon’s I Am the People. In the first scene, she’s mock-berated by a woman who chides her for filming (“get rid of this sad spectacle”) and for being too skinny: “You could do hunger campaigns for Somalia!” The title card thereafter is very much on-point: this is all very much “un film de Anna Roussillon,” with her remaining unseen but regularly heard from behind the camera.

Cairo-born French resident Roussillon starts filming observations of agricultural life for an unspecified project in January 2011 near Luxor, Egypt. When she returns home, she turns on the TV and is taken aback by anti-Mubarak demonstrators. “Fuck!” she seethes. “I left the day before it started.” She Skypes with farmer Farraj Abdelwahid. “I want to see the revolution,” she complains. “The revolution?” he laughs. “Watch it on TV.” Instead, Roussillon returns to the Luxor area and embeds for the long-term. The topic is revolution not as lived and instigated by the relative few who get TV coverage, but as observed and experienced by those in the same country far from immediate violence.

Roussillon’s camera is often planted at the same height as those speaking while seated in the fields — very Ozu tatami-style, meeting the speakers literally head-on in a gesture of both parity and respect, a visual choice that helps somewhat level an otherwise great disparity. The relationship between Roussillon and Farraj and his family is warm but sometimes contentious: in a tense exchange, Anna and Farraj argue about whether the very concept of democracy is merely a cover for the imperialistic US dictating to other countries what they can and can’t do. The divide between documentarian and the documented is one of national circumstances and values (Anna is constantly reminded that her child-bearing years are fast ending), religious background (Farraj is a devout Muslim), political philosophy, technological access et al.

Farraj moves from support for Mubarak’s overthrough to glee at his replacement by Muslim Brotherhood candidate Mohamed Morsi, denial that the new president’s tenure is going poorly, and finally acceptance that Morsi must go. “If everyone agrees that something is bad, should I be the only one to say it’s good?” he concedes. Constant disagreement doesn’t forestall mutual respect: I’ve rarely seen a sweeter exchange between filmmaker and subject than the one in which Farraj tells Roussillon he wants her to be buried with the rest of the family. I Am the Family is a portrait of tricky give-and-take between an unseen but heard presence and those she records, a document of individual and mass political thought evolving in real time, and a demonstration of what life apart from but directly affected by the revolution looks like.