Not Without My Daughter: Jauja 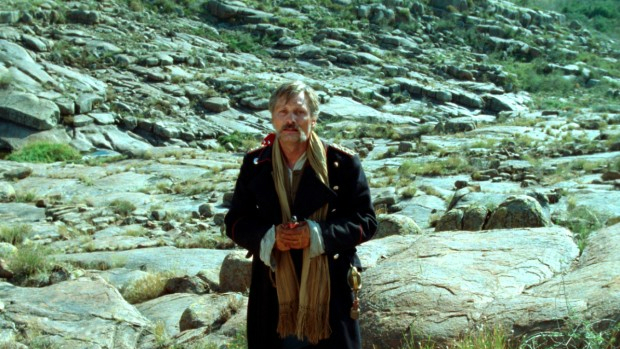 Jauja courts enigmatic status, but this much can be safely established: Danish officer Captain Dinesen (Viggo Mortensen) is with his daughter Ingeborg (Viilbjork Mallin Agger) in 19th-century Patagonia for unspecified military purposes. She’s a bit of a mystic, announcing “I love the desert. I love how it fills me.” “I beg your pardon?” sputters nonplussed, over-protective dad, put off both by her love of inhospitable terrain and sexual language. Ingeborg promptly runs off with a young officer and Dinesen follows, his would-be rescue made more dangerous by repeatedly coming close to Zuluaga — once a Danish officer, now something like a Red Indian of old Hollywood, roaming the countryside and savagely killing the innocent for no apparent reason.

In his first three features (pointedly not counting the self-congratulatory medium-length indulgence Fantasma), Lisandro Alonso often favored a camera moving along with its stoically silent protagonists: La Libertad‘s laborer, Los Muertos‘ downriver traveler, Liverpool‘s cross-terrain tramper. Though once again largely narratively predicated on covering lots of ground, Jauja does something very different, which could be labeled landscape shot-reverse shot. The opening nicely establishes this principle: we see Dinesen roaming the cliffside area, then a reverse shot of a military subordinate jerking off in a shallow pool. Instead of yoking together two medium-shot bodies or close-up faces, the cut turns the camera 180 degrees while also relocating it a distance that seems easily a quarter of a mile away, using the space between people to reveal their territory.

Alonso works variants of this kind of editing throughout, a sort of parody of standard coverage practices suggesting a great deal about each scene’s geography. At one point, the camera regards, from above, Dinesen climbing a rocky mountain, restricting the frame to a manageable number of stones, then cuts to a reverse angle from a panoramic remove, shrinking the human to specklike perspective against the overwhelming size of what he’s clambering over and the expanse of empty plains below. The outdoors repeatedly swallows characters, providing new measures of scale to measure their relationship to each other. In one particularly massive shot, Dinesen hides while watching Zuluaga kill someone up on a hill. The space between the two is so great that Zuluaga flickers in and out of perceptible dot-like status, finally exiting into nullity. It’s pretty impossible to simultaneously keep your eye trained on Dinesen struggling to figure out whether to shoot and Zuluaga’s minute speck; given that the scene’s major question is whether a gun will go off, it’s fascinating that it’s easy to forget Mortensen is even there.

Even more than the period setting, new presence of professional actors or comparative surplus of dialogue, these new measures of scale and editorial patterns differentiate Jauja from Alonso’s previous films. He’s predictably still all about D.W. Griffith’s proverbial wind in the trees: when Ingeborg and her fugitive swain bend from sitting to lying for copulatory purposes, the camera stays fixed on the tall grass around them. This kind of insistent slow cinema is always dangerously near self-parody, but Alonso is exceptional at careful framing that transcends roteness and the cutting is careful to vary the duration of each shot: it’s not necessarily axiomatic that someone has to walk or ride across the entirety of a frame before a cut.

A shot of Dinesen staring at himself in mote-speckled water rhymes with a later shot of the captain stretched out on top of a mountain staring at the stars — one man contemplating both himself and his place in the cosmos, foreshadowing a shift from deranged, not-uncomic rescue quest (note Danesen scrambling up a hill: “What a shitty country”) to not-fully-explicable spirit quest. As in Uncle Boonmee Who Can Recall His Past Lives, a descent into a cave is fraught with transformative significance. Dinesen’s led there by one of the year’s cinematic animal all-stars, a dog first seen from behind in a pool of water in sphinx-like repose who unexpectedly rises; given statue-esque size from the close-up angle, it’s a majestic moment, transforming a goofy-looking animal into something much more majestic. I don’t know what exactly Jauja wants to signify in its final moments (some useful leads can be found in this Alonso interview with Adam Nayman), and to some extent that’s by design: this is the work of a director who (like Rivette and Kubrick) wants to eliminate his conscious a bit to better produce movies that can surprise and mystify even him. But every camera move (or lack thereof) crackles with purpose, and the film moves towards its confounding finale with such pleasurable assurance that I’m glad not to know.