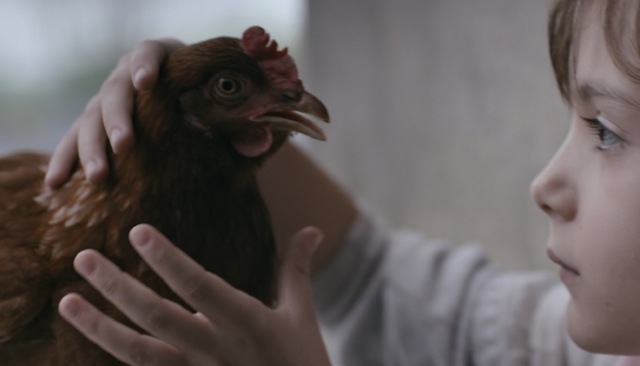 With its “bodegas” serving $35 seafood entrees and cobble stone streets lined with Prada, Burberry, and every other Madison Avenue ready boutique a yuppie mom could think up, Aspen may seem like an odd location for the country’s preeminent shorts festival. The grungiest thing about the stunningly well-preserved 19th century Wheeler Opera House — the festival’s screening and conversation locus — are the $4 yellow bullet tall boys tucked behind the bar amid top shelf malts.

But despite the slightly stuffy portents, audiences seemed game for whatever co-directors Laura Thielen and George Eldred threw their way: dry comedies, 40-minute docs, atmospheric animations, and gutting dramas all elicited some level of interactive play from the Opera House. Though there were plenty of intriguing selections, the programming occasionally functioned as a disorienting counterpoint to the average festival, where shorts are carefully siphoned off into “narrative,” “documentary,” and “animation” blocks.

I’m all for mixing things up and find these delineations restrictive, but at times, it felt like a film was playing to a completely different audience than the one that preceded it. An animated selection about a jovial mortician who practices tea time with his clients seemed an odd lead-in to a documentary on Cairo street art during the Egyptian Revolution that was half as long as The Square, but so be it. The slight catch all nature to Aspen’s programming is less a jibe at the directors, and more so at the dearth in strictly shorts showcases. It’d be hard to fault Thielen and Eldred for wishing to give exposure to as many genres as they see fit when shorts so often play second fiddle to a festival’s feature offerings.

In any case, the head and shoulders highpoint during my few day stay in Aspen was the Cannes-Sundance title, The Chicken. In 1993 Sarajevo (a title card is shrewdly inserted at the film’s close rather than its opening), an army man pops by the apartment of a woman and her two daughters to gift them a chicken. The younger daughter immediately becomes intent on rescuing the bird from its dinner time fate, and releases it out into the streets. When the mother leaves their apartment to fetch it, director Una Gunjak effortlessly turns the tables on her six-year-old protagonist.

What the girl was so desperate to save ends up inadvertently endangering her mother, who, bobbing in and around trash bins in search of the chicken, gets caught in a military crossfire. As Gunjak frames the two daughters from their kitchen window, looking down at the roof below in abject horror, you best believe that six-year-old is having second thoughts about throwing a wrench in the food chain. By the time her mother returns home with the bird, she’s ready to ring its neck herself. For every one of its 15 minutes, The Chicken modulates the emotional dynamics precipitated by its title character, resulting in a 180-degree, organic display of tension.

Winner of Best Drama and an Audience Award, Jamie Donoughe’s world premiering Shok also saddles an object with the burden of some heavy lifting in 1990s war torn Kosovo. Working within a framed narrative spurred by a bicycle left in the middle of the road, Shok relates the friendship of two pre-adolescent boys whose shared mode of transportation is nicked by a nefarious soldier. Without their bike, the pair are left to ride the school bus, which begets a life-threatening encounter. It’s an entirely capable and well situated narrative, but the execution is played a little too safely for the stakes in a barrage of shot-reverse shots and flat compositions.

A second avian entry, The Seagull, a Spanish language Argentina/France co-production, takes its name from the Chekhov play and draws the reflexive nature of its source material to the forefront. Opening on a train speeding through the countryside, director Esteban Perroud lets us peak inside a series of appealingly rough-hued exchanges before settling on his main character, an actress, who appears to be facing her part with a degree of despondency. Once we reach the wooden set walls of the theater, however, things fall apart. The melodrama kicks into overdrive as Perroud lifts the unhinged actress tropes from Chekhov and casts them without context onto his lead, whose affair with another player is causing her to come apart at the seams. That all of the shouts and murmurs are captured with a wildly spastic handheld offers little in the way of cinematic subtlety.

By far the most crowd pleasing short I sat for was surely {The And} Marcela and Rock, Topaz Adizes’ bewitching inquiry into a relationship and its (dis)contents. Marcela and Rock, who, as a title tells us, have been married 7 years, sit on opposite sides of a bench, pulling each other questions from a pile of notecards. Shooting with three cameras (two singles and a medium wide profile), Adizes’ split screen edits allow you to focus on each of their responses without missing a beat or a rather telling reaction. Through broad albeit stinging questions like “When were you most disappointed in me?”, the skeletons begin to unravel in a display of honesty so steadily handled it should be used as an acting class exercise. I was sad to have missed the opening night interactive counterpart to the film, which I’m certain elicited some revealing confessionals from the couples in the audience.

Somewhat intriguingly, the festival’s strongest programming seemed to be in the animation arena. Me and My Moulten, from Oscar-nominated director Torill Kove, was an adorable, distinctive look at adolescent growing pains in the middle daughter of two eccentric architects in Norway. Kove playfully marries her images with her characters in constructing blueprints of their mod home that stand in deliberate contrast to their neighbors’, and just about anything else that cries aspirational normalcy to a teenage girl. With German Shepard, director Nils Bergendal investigates his subject’s hereditary infatuation with the Holocaust and Jewish-German relations with aesthetics as fine as a needle point; and in The Mitten, a girl’s stranded clothing item becomes a safe haven for otherwise combative animals in the heavy snow, in a dialogue free display of craftsmanship. As a twenty-something, I’m probably a hair past the target audience, but you’re never too old to appreciate a short story well told.