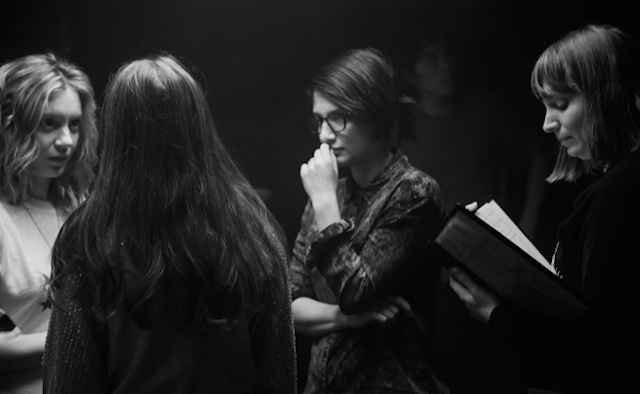 Chloé Robichaud (center) on the set of Féminin/Féminin

by Sarah Salovaara
in Festivals & Events, Filmmaking
on Apr 23, 2015

Tribeca’s N.O.W sidebar is noteworthy for two reasons: first, in that it aims to put forth the idea of the independent filmmaker as a brand, rather than the purveyor of a specific project, and secondly, because it suggests that the most successful online content is made for a clearly defined audience, or at least contains eye-catching enough packaging that can propel through the glut. “My Life in Sourdough” and “Eat Your Feelings”, for instance, call on the rather deep bullpen of internet foodies by situating a recipe at the center of each episode. The latter is boy meets girl plus 6 AM homemade pasta, and readymade for the venn diagram sweet spot of film and cookery. In “You’re So Talented,” an out of work actress in Chicago struggles to keep herself occupied with questionable activities such as sleeping with fellow actors who whip out their reel ready clips mid-make out, thereby forging an inside joke with a film inclined demographic.

“The Adventures of Jamel: The Time Traveling B-Boy” lifts its entire premise from a Louis CK quote that addresses why time machines are an exclusively Caucasian phenomenon. (The punch line: no Black person would want to revisit any year before 1980). In one of the two primer episodes, Jamel ventures back to the night of Abraham Lincoln’s assassination and finds himself in a break dance to the death with John Wilkes Booth in a rather goofy historical revision that nonetheless bridges the disparate genres of costume and comedy.

The other handful of works are featured under the umbrella of their creator. Bianca Giaever, who works at the nexus of radio and animation, already has something of a brand despite her 24 years of age, and is currently at work on a series with This American Life. Her style is simple: pair affecting, open conversations (with a child, in The Scared is Scared, and her college guidance counselor in Holy Cow Lisa) with clean cut visuals, resulting in a pure, accessible storytelling. Cecile Emeke‘s repertoire is more varied, moving between narrative, documentary and tone poems, but her best series, despite it’s jarring micro-edits, is “Strolling,” which poles twenty-somethings around England and France on their experiences with (mis)representation. It’s perhaps no coincidence that N.O.W is far and above Tribeca’s most diverse section — content and creator-wise — in that its selections play to the democratized audience of the internet, rather than a Manhattanite who can drop 20 some odd bucks to see the latest celebrity outing before its eventual release date.

Because releasing content on Vimeo or YouTube ups your net worth to the tune of zero dollars, the production values of the selections can tend toward a little shaky, and N.O.W’s strongest series are those that juggle the trifecta of audience, story and execution. Aside from the hilarious Drew Droege of “Chloe” fame, and the talented Tony Zhou, whose video essays are regularly featured on this site, the most impressive pick is “Féminin/Féminin” from the Cannes-approved filmmaker, Chloé Robichaud (Sarah Prefers to Run).

An ensemble piece about lesbians in and around Montreal, “Féminin/Féminin” is the rare web series that seems organically aligned with its form. The season opens on a collection of friends, eventually exploring each in their own episode, before reuniting them at the close in a satisfying instance of a “full circle” narrative. The actresses are uniformly strong, the writing is witty, and though the documentary-esque interruptions occasionally bungle, they can make for a nice formal respite. Moreover, if there were any budgetary restrictions, you’d be hard pressed to discern them.