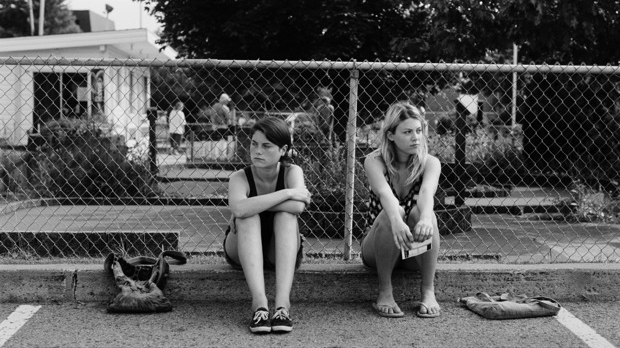 Upon its Cannes premiere and ever since, Stéphane Lafleur’s Tu dors Nicole (You’re Sleeping Nicole) was instantly and endlessly pegged as the Québécois equivalent of Frances Ha. Understandable, given that it’s a black-and-white portrait of two close girlfriends’ extended falling-out as one conspicuously matures while the other flounders aimlessly. Still, Nicole‘s tempered acridness and emphasis on the annoyances of minimum-wage jobs taken upon reluctant entrance to the working world makes Ghost World a closer point of reference. Despite taking place at a post-undergrad time in its characters’ lives, the vibe is similarly very high school (minus the unpleasantness and pain that can come with that terrain): these are young people hanging out together over and over for lack of money or a wider social circle.

You can guess the general plot arc sight unseen: in an uneven friendship, 22-year-old Nicole (Julianne Côte) is the comparatively gangly insecure one in relationship to conventionally pretty blonde BFF Véronique (Catherine St-Laurent). It’s their post-college-graduation summer; Nicole has received her first credit card and instantly uses it to purchase tickets for the two to travel to Iceland, where they’ll do “nothing, but somewhere else.” (Knowledge of small film budgets, and the inevitability of friendship friction, indicates the precise likelihood of their actually making it there.) While waiting to get out of town, the two kill time watching TV, walking their bikes through fields and passive-aggressively tolerating Nicole’s brother’s band, which has taken up semi-permanent residence in her parents’ house while mom and dad are on extended vacation.

Nicole‘s virtues aren’t in its as-expected story but in the ways Lafleur (in his third feature) finds a unique vantage point on it. The film’s five cardinal virtues, in no particular order:

1. Writer-director Lafleur doesn’t worry about rendering Nicole “unlikeable.” She is, at various points, petulant and self-deceiving; she calls her co-worker “retarded,” and her stores of empathy are generally in fairly short supply. Nonetheless — neither precisely “despite” nor “because” of her flaws — she’s fully worthy of our empathy and totally young adult-recognizable, relatable in the way that most people flub at least 15% of their day (he said hopefully).

2. That black-and-white cinematography (by Sara Mishara) is rendered via 35mm. Even in digital transfer it’s low-key luminous, with a palette of shimmery grays and silvers.

3. This is difficult to describe precisely without creating shot-by-shot breakdowns of each scene, but Lafleur has the rare ability to convey a precise sense of each and every interior space in one shot. Not to necessarily compare him to Straub/Huillet, but Straub’s stated goal in their work was to find one point in the room from which to film each scene in order to reconstruct “the reality of the location” rather than breaking down each room into “shots that are not linked in relation to a location.” Lafleur gives himself more coverage scope than that; nonetheless, a lot of Nicole takes place in a single house, and (with help from an architect) I could probably draft you its blueprint in very little time.

4. That precise sense of space probably bears some relationship to Lafleur’s background as a musician. Nicole’s brother and his bandmates are recording their songs (austerely driving post-punk instrumentals out of step with the larger musical moment, something like Total Control’s “Carpet Rash”) the old-fashioned way, with the drummer sequestered in one room, the bassist in another, etc. The mix is great at showcasing what they sound like both together in one space and as heard from various spots in the house when isolated. They are all, thank goodness, actually capable of playing their instruments in recorded real-time; the plausibly live sound helps a lot, and it’s great not to cringe while watching people who clearly have no idea how to e.g. handle a bass.

5. Tu dors Nicole has its fair share of “quirk”; it’s often a kind of masterclass in how to defang that adjective of the suffocatingly cute. What grounds it are the above-listed virtues of being grounded in very particular spaces, a firm sense of the simmeringly low-key rage that thankless underpaid work can bring, and the ability to tonally manage the split between drollery and rage. The ending — the precise opposite of “quietly” resigned/hopeful — is an unexpected, anti-naturalistic expression of low-stakes but valid anger, and all the better for it.