Spy: The Third Feature by Paul Feig, Our George Cukor 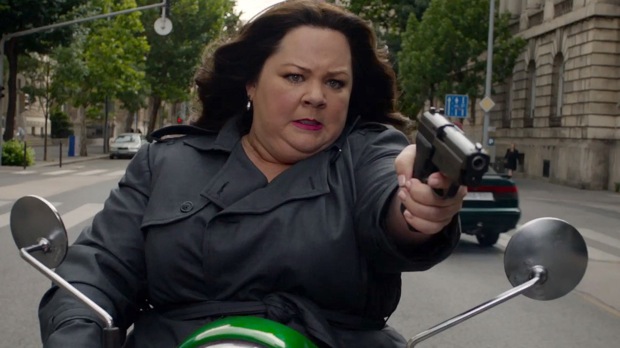 During his career, George Cukor was often referred to as a “women’s director” for his facility with foregrounded female performers: Katharine Hepburn in no less than 10 collaborations, Jean Simmons in The Actress, the women in The Women. By that logic, Paul Feig is our Cukor: beginning with Bridesmaids (since we’ve confined I Am David and Unaccompanied Minors to the rubble of collective amnesia), he’s established himself as a specialist in female-led comedy, following up with The Heat and now Spy. In interviews prior to Bridesmaids‘ release, he mused that the film better not bomb or he’d have messed it up for women in comedy for decades. If none of his subsequent films can imagine anything as radical as including no speaking parts or even visibility for men (as in The Women) — and if they’re still being directed by Feig rather than a woman — the man’s heart is presumably/demonstratively in the right place.

Spy is primarily a showcase for Melissa McCarthy, an acquired taste I have yet to acquire. I don’t intend to be sarcastic or backhandedly complimentary in noting that instead of starting at 40 and working her way up to 90, she starts here at 20 and goes to 100; this isn’t exactly range, but she does display an unexpected capacity for plausible meekness and modulated volume range as CIA desk operator Susan Cooper. Her task is to monitor the satellites and walk spy Bradley Fine (Jude Law, as always more comfortable with self-mockery than unabashed strutting) through dangerous missions by keeping an overhead eye on who’s coming his way. (This is not a movie for those who can’t stop worrying for two hours about the real-world implications and ethical transgressions of American foreign policy, drones, etc.) A predictably flimsy plot is an excuse to send her to Europe in a variety of unflattering undercover disguises; one of the film’s polemical running gags is that the CIA (read: society’s everyday gaze) is unable to look at a big woman and see her as plausibly anything but pathetically provincial and unlovable. I’m not much inclined to parse Spy‘s feminism(s), in part because it’s not really my place, though I’ll note in passing Allison Janney as Cooper’s boss, disgusted when she learns that she self-sabotaged herself, pushing aside her promising CIA career as a potential field agent when Fine convinced her she’d be better as his operator. “He sniped you,” she rolls her eyes. “Women.” Be confident!

Feig’s gift is obviously for working with performers, not matters like camera placement or pacing: Bridesmaids ran an absurd 125 minutes long and destroyed the most basic eyeline matches at every turn. That’s puzzling given that Wes Anderson’s regular DP Robert Yeoman has shot his work from Bridesmaids on, but presumably he’s also capable of just doing what he’s told and taking the check. Spy is a step in the right visual direction, managing to render shot-countershot without total visual disorientation and finding something like elegance in its numerous chases and fights. A surprisingly well-choreographed kitchen showdown, making good, HK-esque use of culinary implements, may feature one of the more functional overhead shots on record, but it’s one way of keeping things coherently exciting nonetheless.

A lot of the comedy in Spy uses jokes and rhythms that will be very familiar to anybody who keeps up with contemporary studio comedies. There’s the Oddly Specific Pop Culturally-Based Diss About A Character’s Appearance — in this case, McCarthy telling the sporadically present/gratifyingly amusing Jason Statham that his getup in one scene makes him look like he’s in Newsies (it does), the Back-And-Forth-Insult-Fest between two antagonists clearly riffing until they run out of steam (McCarthy vs. Statham, Rose Byrne, everybody), etc. Given that McCarthy, even at her most toned-down, is effectively a four-note performer, Feig compensates by surrounding her by other similarly limited presences, none of whose strengths overlap redundantly with any others’. In addition to those noted above, an American star may be borne in Miranda Hart, a well-established British comic making her first appearance in an American vehicle. She’s tall, relentlessly self-deriding and polished in her oddity; she should go far.

By my count, the next wide-release comedy a (non Seth MacFarlane-loving/Ted 2 anticipating) person could await with any reasonable degree of expectation is Judd Apatow’s Amy Schumer-starrer Trainwreck, which will take another month and a half to arrive. I’m a fiend for the arthouse and marginal, but I’m also a multiplex-raised creature, and am reflexively conditioned to hope for the best when the summer season arrives. By those very meager standards, Spy will just about do the job: it has a laugh every five minutes or so, it looks like someone’s in control, it’s not gratuitously offensive towards the marginalized in the name of being an “equal opportunity offender,” it has the guts to get violent when only a knife through the hand will advance a fight and get an unexpected laugh via a jolt. The most idiosyncratic joke comes right at the beginning, with a title card welcoming us to that routine location for globetrotting blockbusters, “Varna, Bulgaria” — a riff on audience-intelligence-insulting title cards informing us that we’re in Paris, France (not Texas, lest an establishing shot of the Eiffel Tower not drive the point home), Rome, Italy and so forth. All of which information Spy subsequently gives us: that opening idiosyncracy (which is a lie: the movie’s mostly shot in and around Budapest) is a riff the rest of the movie undermines. But it’s a low-expectations summer, so it’ll do; settle in.