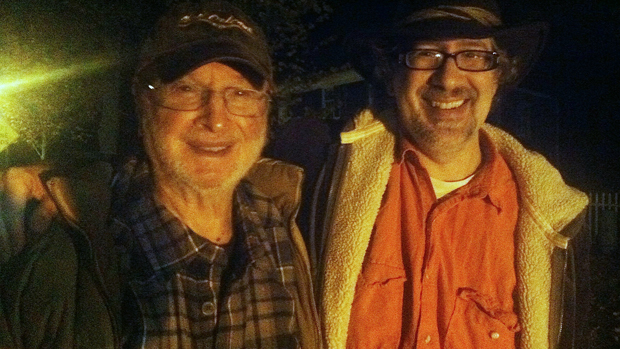 As one of the pillars of the Golden Age of the ’70s, Mike Nichols’ film Carnal Knowledge was a big influence on my own last movie, Between Us. So during post-production on Between Us, I happened upon a biography of Carnal Knowledge screenwriter Jules Feiffer that mentioned that he had several unproduced screenplays. Hmm, I thought: Feiffer had won a Pulitzer Prize for his cartoon strip in the Village Voice, he’d won a couple of Obies for his plays, and as a screenwriter, he’d written Popeye for Robert Altman, Little Murders, that Alan Arkin had directed, and won a Best Screenplay award at the Venice Film Fest for I Want to Go Home, directed by Alain Resnais. Feiffer’s short animated film Munro even won an Oscar in 1961.

With a track record like Feiffer’s, chances are whatever hadn’t gotten made was still probably pretty good! So along with my producing partner Dana Altman (Robert’s grandson) we tracked down Feiffer through his speaking bureau. Still very much alive, teaching in the Hamptons, and working on a series of graphic novels, Feiffer responded right away via email. Cryptically, he said he couldn’t find any scripts, but to try him again in four months. He’d been divorced a couple times and kept moving around his storage. Four months later and another exchange of emails resulted in no new information: Not only couldn’t Feiffer find any unproduced screenplays, but it was still a mystery to Dana and me what they even were.

Completely coincidentally, Jules’ daughter Halley Feiffer had a film at Slamdance later that same year (He’s Way More Famous Than You). I struck up a friendship with Halley at the festival and that renewed the exchanges with Jules. But still no luck finding any scripts. Thankfully, my old pal Kevin DiNovis, another Slamdance alumnus (Surrender Dorothy), vaguely remembered reading one of Feiffer’s screenplays in Scenario Magazine, back in the 90s!

Known in the last decade of the 20th Century as the definitive magazine for Hollywood screenwriters, Scenario was a quarterly publication that mostly reprinted the top produced screenplays at the time. Occasionally, they would also publish an unproduced screenplay, whose rights were still available. With the internet in its infancy, and a decade before Franklin Leonard’s Black List made unmade scripts viral sensations, getting an unproduced screenplay published in Scenario was a very big deal in Hollywood. Feiffer’s script was actually in the inaugural issue of the magazine, making it an even hotter property.

But Kevin was also divorced and didn’t know where his copies of Scenario were. Another screenwriting friend, Scott Tobis, said he had a copy! But like Feiffer and DiNovis, Scott had a similar tale of divorce and inaccessible magazine storage.

That issue of Scenario was only available in two libraries in the entire United States, but fortunately one was in LA: The Academy Library, to be exact. Operating more like a monastery than a library, the Academy of Motion Pictures Arts & Sciences has strict rules to enter: no cameras, no cell phones, no pens. I dutifully adhered to the rules and finally got a chance to read the elusive script, Bernard and Huey.

It was brilliant: hilarious, poignant, dramatic and remarkably timeless. Even better, there was an accompanying interview with Feiffer that mentioned that he’d worked with an LA.producer who’d tried to get the screenplay made in the mid ’80s, first through Showtime, and then independently. But the name given in the article, “Michael Brandon,” didn’t show up on IMDB or anyplace else.

As soon as I left the Academy’s cloistered building, I immediately contacted Jules again, who was thrilled to hear about the discovery of the script. But he warned me that the version in Scenario might have been an edited one. I asked him if his old agent might have one. “He’s dead.” What about his lawyer? “Dead.” Maybe we could track down his old assistant who might still have a floppy drive with the full script? “[She] may no longer be numbered among us,” he emailed me.

Fortunately, Jules remembered the old LA producer – maybe he still had a copy of the final script? Turns out Scenario had spelled his name wrong. Michael Brandman – who still writes and produces the Tom Selleck Jesse Stone TV movies for CBS – was very much alive and kicking in LA. I spoke with him several times and he was thrilled to hear renewed interest in Bernard and Huey. Better still, after a week of searching his old files, he was able to find an original hard copy of the final script!

I picked it up from his Hollywood office and drove straight to my local copy shop to get it scanned it in as a PDF as well as a character recognition file – so once again it could be incorporated into modern software.

I arranged a trip to visit Jules at his home in the Hamptons. Bringing bagels and lox from Russ & Daughters on Houston (per Halley’s recommendation), I spent a lovely afternoon with Jules and we decided to move forward with production of Bernard and Huey. I would visit him again, a year later, with my other producing partner Mike Ryan – a visit that we nicely recorded for fun and posterity (see our Kickstarter videos). Feiffer’s got amazing, hilarious stories about everything from almost writing Dr. Strangelove for his pal Stanley Kubrick, to introducing Jack Nicholson to Warren Beatty at a McCabe and Mrs. Miller Altman party, to almost getting Hugh Hefner arrested outside the Chicago Democratic convention in ‘68. (If anyone has a contact at American Masters, please tell them to do a doc on Jules!)

Of course, anytime you’re dealing with a literary property that’s nearly 30 years old, you’ve got to make sure that all the rights are cleared and sorted out. That process alone would take another year and a half. Naturally, it didn’t help matters that everyone in Jules’ old team is dead.

The characters of Bernard and Huey had originated in Jules’ Village Voice strips dating back to 1957. He drew them as middle-aged characters in a series of cartoons for Playboy magazine in the early 1980s. By 1986, Showtime had asked Jules to write the original screenplay but the same week he turned it in, Showtime’s ownership had changed hands. The new regime wasn’t interested, and never paid Jules for the script.

When I approached them, the nice people at Showtime’s business affairs office dug through their archives and actually found the physical file labeled “Bernard and Huey” – which confirmed that they had no claim on the script. The good news was that Jules had always retained the rights to the script himself (as a subsequent search of the US Copyright Office confirmed).

At one point, I even sent my pal Mike Shubbuck to the Library of Congress in D.C. where Jules had donated some of his files in 2000. Buried in the archives was Jules’ original handwritten script to Bernard and Huey, including doodles, crossed out scenes, and margin notes to call his then very-much alive lawyer. Mike was able to sneak still shots of the yellow legal pad sheets with the screenplay, and we’ve now compiled it as a PDF (offering it as a reward on Kickstarter, of course!).

Thankfully, everyone who is still alive has tremendous love and admiration for Jules and without hesitation all have been helping us clear the decks to make the movie. His current book agent, Gail Hochman, has been especially patient and persistent with us. As for my own lawyer, New York-based Bob Seigel, it turned out he used to work in the same office as Jules’ dead lawyer, so that helped smooth things out a bit.

With the rights sorted out, the tough part is over. Now all we need to do is make the movie – how hard could that be?

We’re in the midst of a Kickstarter campaign, and we’ve also raised some other private equity money. Once we have enough to set the start date, we’ll start casting in earnest. If all goes well, we should be shooting Bernard and Huey next spring!

Dan Mirvish is a filmmaker, author and co-founder of the Slamdance Film Festival.