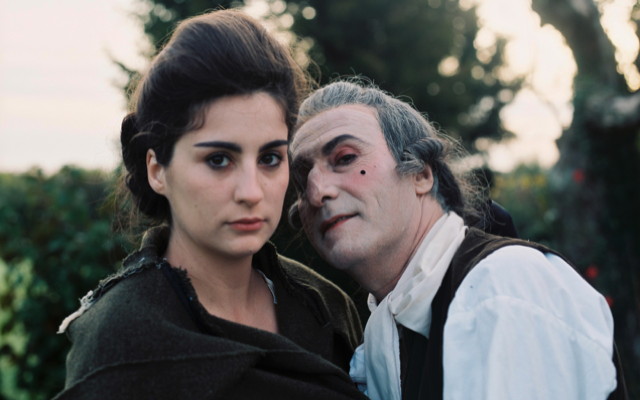 Story of My Death

Perhaps my favorite festival of the year, The Film Society’s New Directors/New Films has just announced its first seven titles for the 2014 edition. Immediate notables include Richard Ayoade’s The Double, which bows at Sundance this week following its well-received Toronto premiere, and Albert Serra’s Locarno Golden Leopard prize winner, Story of My Death. (Death was recently the cover story in a strongly recommended issue of Cinema-Scope.) As ever, there are still obscure debuts to be found in Of Horses and Men and Trap Street, ensuring the festival’s spirit of discovery is alive and well. This year’s ND/NF is set for March 19-30 at Lincoln Center, and you can read the full synopses of the films below.

The Double (2013) 93 min
Director: Richard Ayoade
Country: UK
Richard Ayoade has built a loyal following with his hilariously off characters, notably the one he plays in the TV series The IT Crowd and those that inhabit his 2010 directorial debut, Submarine. His cerebral, visually arresting follow-up, The Double, based on Dostoevsky’s 1846 novella, enters slightly darker territory, and recalls the stylizations of Terry Gilliam. Starring Jesse Eisenberg as both Simon James, a humdrum worker drone, and James Simon, his gregarious doppelgänger, the film is set within both the claustrophobic confines of Simon’s bureaucratic workplace and his paranoid mind. Aided by a stellar supporting cast (including Wallace Shawn, Mia Wasikowska, Sally Hawkins, Paddy Considine, and Chris O’Dowd), The Double firmly establishes Ayoade as a leading voice in contemporary cinematic comedy. A Magnolia Pictures release.

Of Horses and Men (2013) 80 min
Director: Benedikt Erlingsson
Country: Iceland
The debut feature by celebrated stage director Benedikt Erlingsson announces the arrival of an innovative new cinematic voice. Set almost exclusively outdoors amid stunning Icelandic landscapes, the film features in equal parts a cast of exquisite short-legged Icelandic horses and human characters—including the terrific Ingvar E. Sigurdsson and Charlotte Bøving as meant-for-each-other but put-upon lovers—illuminating with great inventive flair the relationship between man and beast. Several narrative strands defined by the way each character relates to their horse recount a variety of situations according to the particulars of the seasons, resulting in a surprising and sometimes humorous symbiosis between horses, humans, and nature.

Salvation Army (L’Armée du salut) (2013) 81 min
Director: Abdellah Taïa
Countries: France/Morocco/Switzerland
Like the book it’s based on—Abdellah Taïa’s own 2006 landmark novel—the Moroccan author’s directorial debut is a bracing, deeply personal account of a young gay man’s awakening that avoids both cliché and the trappings of autobiography. First seen as a 15-year-old, Abdellah (Saïd Mrini) habitually sneaks away from his family’s crowded Casablanca home to engage in sexual trysts with random men in abandoned buildings. A decade later, we find Abdellah (now played by Karim Ait M’hand) on scholarship in Geneva, involved with an older Swiss professor (Frédéric Landenberg). With a clear-eyed approach, devoid of sentimentality, this wholly surprising bildungsfilm explores what it means to be an outsider, and with the help of renowned cinematographer Agnès Godard, Taïa finds a film language all his own: at once rigorous and poetic, and worthy of Robert Bresson in its concreteness and lucidity.

A Spell to Ward Off the Darkness (2013) 98 min
Directors: Ben Rivers and Ben Russell
Country: Estonia/France
As collaborators, Ben Rivers and Ben Russell, two intrepid and nomadic talents of experimental film and art, have created one of the most bewitching cinematic experiences to come along in a great while. In A Spell To Ward Off The Darkness, Robert A.A. Lowe, the celebrated musician behind Lichens and Om, gives a strangely affecting, perhaps even trance-inducing performance as the film’s Parsifal figure, a quixotic man who embarks on a quest for utopia—the holy grail of infinite truth, self-knowledge, and spiritual connectedness. He finds some measure of it in three seemingly disparate contexts: in a small collective community on a remote Estonian island, in isolation in the northern Finnish wilderness, and onstage fronting a black metal band in Norway. While his experience seems to be a perpetual one of home, exile, and return, for us, it is purely magical.

Stop the Pounding Heart (2013) 100 min
Director: Roberto Minervini
Countries: Belgium/Italy/USA
Sara (Sara Carlson, playing herself) is part of a devout Christian goat-farming family with 12 children, all home-schooled and raised with strict moral guidance from the Scriptures. Set in a rural community that has remained isolated from technological advances and lifestyle influence—no phones, TVs, computers, or drunken teen brawls—the subtly narrative film follows Sara and Colby, two 14-year-olds with vastly different backgrounds who are quietly drawn to each other. In Minervini’s intimate documentary-style portrait—the third in the Italian-born filmmaker’s Texas trilogy—Sara’s commitment to her faith is never questioned. It’s the power of the director’s nonintrusive handheld-camera style that reveals his protagonist’s spiritual and emotional inner turmoil about her place in a faith that requires women to be subservient to their fathers before becoming their husbands’ helpers. By also presenting an authentic, impartial portrayal of the Texas Bible Belt, Minervini allows for the humanity and complexity behind the stereotypes to show through.

Story of My Death (Història de la meva mort) (2013) 148 min
Director: Albert Serra
Countries: Spain/France
No one else working in movies today makes anything remotely like the films of Catalan maverick Albert Serra, a cerebral oddball and improbable master of cinematic antiquity. Known for his unconventional adaptations of Cervantes’s Don Quixote (Honor of the Knights) and the Biblical parable of the Three Kings (Birdsong), Serra here stages the 18th-century passage from rationalism to romanticism as a tussle between two figures of legend, Casanova and Dracula. Against a backdrop of candlelit conversation and earthy carnality, Serra sets in motion contrasting ideas about pleasure and desire, alternating between winding philosophical dialogue and wordless passages of savage beauty. Winner of the top prize at the 2013 Locarno Film Festival, the film is both a painterly feast for the eyes, abounding with art-historical allusions, and an idiosyncratic, self-aware revamping of the costume melodrama.

Trap Street (Shuiyin Jie) (2013) 94 min
Director: Vivian Qu
Country: China
Notions of surveillance and observation are turned inside out in Trap Street, producer Vivian Qu’s first turn as a director. While surveying city streets for a digital-mapping company, engineer Qiuming catches sight of Lifen, a beautiful young woman. Immediately smitten, he follows her to a street that doesn’t appear on any map or even a GPS. In between his other gigs—installing security cameras, sweeping hotel rooms for electronic bugs—he tries to get to know this alluring stranger. And he does—sort of. But things take a disturbing turn when Qiuming is accused of stealing secrets from the lab where Lifen works, and the mystery, as well as the paranoia, deepens from there. Noir in tone, and a great representation of the newest generation of Chinese filmmakers, Trap Street is a bold story about who is really watching whom that, while firmly embedded in the current cultural context of China, could happen to any one of us.