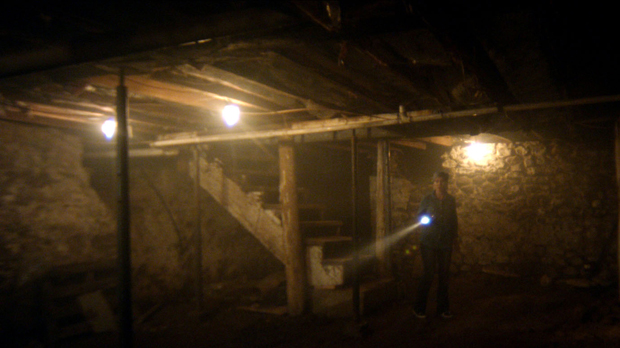 It Follows, Slow Cinema, Summer 2015, Ted Geoghegan, the house of the devil, Ti West, We Are Still Here

There is nothing new about Slow Cinema. From the very beginning of projected motion pictures in the late 19th century, the Lumière brothers utilized the single take, allowing for the temporal flow in the frame to coincide roughly with the audience’s experience of time. The fracturing of time through editing — borrowing from and keeping with the realist conventions of the novel — put cinema on the path of montage: the art of visual storytelling became equated with rapid movement across time (flashbacks and the implied “meanwhile…”) and space (multiple locations). Even cross-cutting — shifting back and forth between two different locations as time unfolds simultaneously — involved the violent, light-speed imaginative leaping across space in the singular moment of the cut.

The recent resistance to fast cutting encompasses an enormous number of films — ranging from already legendary single-take experiments such as Timecode (Mike Figgis, 2000) and Russian Ark (Alexander Sokurov, 2002), to more recent slow-edit films like Neighboring Sounds (Kleber Mendonça Filho, 2012) and Jauja (Lisandro Alonso, 2014). But these films are connected only genetically; the recent slate of Slow Horror is completely of a digital age and its aesthetics of speed, obsolescence and impermanence. Slow Horror films are notable in light of their historical context and can be understood against the larger canvas of the “slow movement” in food, education and other areas. There are moments in these films that stand out in particular. In Ted Geoghegan’s 2015 film We Are Still Here there is a scene that depicts Anne Sacchetti (Barbara Crampton) as she unpacks in their new home in the wintry country. It’s a wordless sequence that stretches for upwards of 10 minutes as she gradually shifts from unpacking in the kitchen to exploring for the sounds that she hears in the house — sounds that lead her into the basement, that eternally reliable reservoir of the unconscious. While horror often has treading-the-water moments like this, they often feel manipulative. Different here is the easy naturalness of the sequence — an effective use of approximated real-time to suture us into Anne’s point of view and psychological state.

The other iconic moment comes from It Follows. Any number of scenes exemplify Slow Horror, but the one that characterizes the aesthetic most boldly depicts Jay (Maika Monroe) in her bedroom, getting ready to go on a date, in a process that takes far longer than it would in a traditional horror film. There is one moment in particular, as she looks at herself in the mirror, that is so slow and static it’s as if the movie had slipped into a subterranean, lava-encrusted Antonioni gear. Unlike the We Are Still Here scene there is no dread-building here; the scene exists not to ratchet up tension but simply to depict Jay thinking, and it’s only much later that we wonder about this moment: was it to suggest that Jay sees herself from the point of view of “the other,” that thing that will come to follow her?

There may be something generational at play in the Slow Horror movement: the directors of It Follows, We Are Still Here and The House of the Devil (Ti West’s earlier 2009 film) were each born within six years of each other, from 1974 through 1980. But there is something deeper at work, I suspect, something about coming of age during the slow transition from analog to digital. David Bordwell and others have written about how Average Shot Lengths (ASL) have shortened in recent decades as a result not only of new editing technologies but also the speed and ubiquity of information across and between the multitude of screens that absorb us. So it is more than nostalgia that accounts for the re-emergence of Slow Horror. In an interview with NPR around the time of The House of the Devil, West noted, “I’ve had every minimum-wage job known to man — and I don’t want to go back to minimum-wage jobs, but I have a fondness for that. So I wanted to make a movie that encapsulated that feeling of being stuck at work, and the apathy that comes with it.”

The remarkable stretches of down time in The House of the Devil — waiting for a pizza to arrive, switching through TV channels, walking up the stairs, filling a glass of water from the kitchen faucet — these moments capture the lost fragments and vagaries of real life and, in doing so, are true, in a different sort of way, than the truth expressed in non-narrative or documentary film. The terminal fear of Slow Horror resides precisely in the very fact of its slowness: against the BitTorrent of our time, these films stretch out and elongate the uncanny moments before Evil shows its face. The genre tells us that Something Bad will happen; that is the nature of horror. Slow Horror makes us see, however, that true terror lies in those long, banal stretches of calm before the storm.