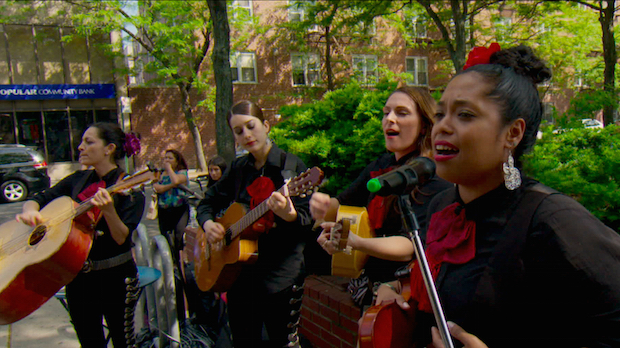 The latest slate announcement from the Film Society of Lincoln Center for this year’s New York Film Festival covers the documentary sidebar. There are several world premieres, including new work from Laura Poitras and New Yorkers’ first chance to see In Jackson Heights, Frederick Wiseman’s portrait of the Queens neighborhood. Here’s the lineup, with descriptions from the press release.

Everything Is Copy
Jacob Bernstein, 2015, USA, DCP, 89m
Jacob Bernstein’s extremely entertaining film is a tribute to his mother Nora Ephron: Hollywood-raised daughter of screenwriters who grew up to be an ace reporter turned piercingly funny essayist turned novelist/screenwriter/playwright/director. Ephron comes vibrantly alive onscreen via her words; the memories of her sisters, colleagues, former spouses, and many friends; scenes from her movies; and, above all, her own inimitable presence. Watch any given moment of Ephron being her sparkling but caustically witty self (for instance, this response to a scolding talk show host—“You have a soft spot for Julie Nixon, don’t you. See, I don’t…”) and you find it hard to believe that she’s been gone from our midst for three years. Everything Is Copy (Ephron’s motto, inherited from her mother) is a lovingly drawn but frank portrait and, incidentally, a vivid snapshot of an earlier, livelier, bitchier, and funnier moment in New York culture. An HBO Documentary Films release. World Premiere

Fish Tail / Rabo de Peixe
Joaquim Pinto & Nuno Leonel, Portugal, 2015, DCP, 103m
Portuguese with English subtitles
In his 2013 masterpiece What Now? Remind Me (NYFF51), Joaquim Pinto turned a first-person diary about chronic illness into an all-encompassing meditation on what it means to be alive. His latest film, co-directed with his husband Nuno Leonel, pulls off a similar balancing act between intimacy and expansiveness. The setting is the Azorean island of Rabo de Peixe, where small-scale fishermen introduce the filmmakers to the rhythms of their labor-intensive routines, artisanal traditions that face extinction in the global economy. Initially broadcast on Portuguese television in an abbreviated version, this new director’s cut is a tender portrait of a community that, through Pinto’s associative narration, frequently extends into more personal and philosophical realms, contemplating such topics as the value of manual work and the meaning of freedom. Fish Tail is as lovely as it is quietly profound, a film that at once acknowledges and transcends cinema’s long romance with maritime ethnography. North American Premiere

Homeland (Iraq Year Zero)
Part 1: Before the Fall
Part 2: After the Battle
Abbas Fahdel, Iraq/France, 2015, DCP, 160m/174m
Arabic with English subtitles
In February 2002—about a year before the U.S. invasion in 2003—Iraqi filmmaker Abbas Fahdel traveled home from France to capture everyday life as his country prepared for war. He zeroed in on family and friends as they went about their business, with much of the action seen through the eyes of the director’s 12-year-old nephew, Haider. When Fahdel returned in 2003, two weeks after the invasion, daily activities like going to school or shopping at the market had become nearly impossible; many areas of Baghdad had been closed off to ordinary citizens, yet everyone pressed on. The young Haider represents, in various ways, the voice of his people: “They are occupiers and we can’t oppose them. Our country has become like Palestine,” he tells a neighbor. Fahdel’s epic yet intimate film paints a compelling portrait of people simply trying to exist in the midst of constant turmoil, and describes the fine line between life and death that civilians in a war zone must walk from day to day. North American Premiere

Immigration Battle
Michael Camerini & Shari Robertson, USA, 2015, DCP, 111m
Michael Camerini and Shari Robertson have been chronicling the protracted struggle for American immigration reform over the past 16 years, crossing the country numerous times to film politicians and activists on both sides of this great and divisive issue. They gained unprecedented fly-on-the-wall access to the key players in Washington as they rode the momentum toward the passage of a bipartisan bill, only to see it shot down, which meant that they had to begin pushing the boulder back up the hill all over again. Two years ago, NYFF51 screened Camerini and Robertson’s series of immigration films, How Democracy Works, and now we present Immigration Battle, their final film on the subject. The key player this time is Democrat Luis Gutiérrez, the charismatic U.S. Representative for the 4th congressional district of Illinois, who negotiates his way through this political minefield—past an obstructionist majority playing to an anti-immigrant base and a President who has just been dubbed the “Deporter-in-Chief” by the pro-reform community—while keeping his eyes firmly fixed on the prize. World Premiere

Ingrid Bergman in Her Own Words
Stig Björkman, Sweden, 2015, DCP, 114m
Swedish with English subtitles
This is a lovingly crafted film about one of the cinema’s most luminous and enchanting presences, composed from her letters and diaries (extracts of which are read by Alicia Vikander), the memories of her children (Pia Lindström and Isabella, Ingrid, and Roberto Rossellini), and a few close friends and colleagues (including Liv Ullmann and Sigourney Weaver), photographs, and moments from thousands of feet of Super-8 and 16mm footage shot by Bergman herself throughout the years. Stig Björkman’s focus is not on Bergman the star but on Bergman the woman and mother: orphaned at 13, drawn to acting on the stage and then on film, sailing for Hollywood at 24 and then leaving it all behind for a new and different life with Roberto Rossellini. Ingrid Bergman in Her Own Words is, finally, a self-portrait of a truly independent woman. A Rialto Pictures release.

In Jackson Heights
Frederick Wiseman, USA, 2015, DCP, 190m
Fred Wiseman’s 40th feature documentary is about Jackson Heights, Queens, one of New York City’s liveliest and most culturally diverse neighborhoods, a thriving and endlessly changing crossroad of styles, cuisines, and languages, and now—like vast portions of our city—caught in the gears of economic “development.” Wiseman’s mastery is as total as it is transparent: his film moves without apparent effort from an LGBT support meeting to a musical street performance to a gathering of Holocaust survivors to a hilarious training class for aspiring taxi drivers to an ace eyebrow-removal specialist at work to the annual Gay Pride parade to a meeting of local businessmen in a beauty parlor to discuss the oncoming economic threat to open-air merchants selling their wares to a meeting of undocumented individuals facing deportation. Wiseman catches the textures of New York life in 2015, the music of our speech, and a vast, emotionally complex, dynamic tapestry is woven before our eyes. A Zipporah Films release.

Jia Zhangke, A Guy from Fenyang
Walter Salles, Brazil/France, 2014, DCP, 99m
Mandarin with English subtitles
Brazilian filmmaker Walter Salles accompanies the prolific Chinese director Jia Zhangke (whose latest, Mountains May Depart, is screening in this year’s Main Slate) on a walk down memory lane, as he revisits his hometown and other locations used in creating his vast body of work. At each location, they visit Jia’s family, friends, and former colleagues, and their conversations range from his mother’s tales of him as a young boy to amusing remembrances of school days and film shoots to memories of his father and the fact that if not for pirated DVDs, much of Jia’s work would go unseen in China. All the roads traveled are part of one journey—the destination of which is Jia’s relationship to his past and to his country. And the confluence of storytelling, intellect, and politics informing all of Jia’s work is brought to light in this lovely, intimate portrait of the artist on his way to the future. North American Premiere

Rebel Citizen
Pamela Yates, USA, 2015, DCP, 75m
Pamela Yates’s new film grew out of her friendship with master cinematographer and fellow activist Haskell Wexler, who’s still going strong at 93. Wexler asked Yates to represent him at a retrospective of his documentary work at this year’s Cinéma du Réel festival in Paris, and she responded by making a film portrait of her mentor and longtime collaborator. Wexler—in an interview with Yates shot by Travis Wilkerson, another comrade-in-arms—speaks with warmth, lucidity, and absolute certitude about his left-wing political beliefs, his craft, and his aesthetics, which are fundamentally one in the same. Rebel Citizen takes us on a revelatory tour of Wexler’s work, and it includes clips from his early documentary The Bus, shot aboard a bus on its way across the country to the 1963 March on Washington, as well as Medium Cool and Underground, his film about the Weatherman co-directed with Emile de Antonio and Mary Lampson. A Skylight Pictures release. World Premiere

Troublemakers: The Story of Land Art
James Crump, USA, 2015, DCP, 72m
The titular troublemakers are the New York–based Land (aka Earth) artists of the 1960s and 70s, who walked away from the reproducible and the commodifiable, migrated to the American Southwest, worked with earth and light and seemingly limitless space, and rethought the question of scale and the relationships between artist, landscape, and viewer. Director James Crump (Black White + Gray) has meticulously constructed Troublemakers from interviews (with Germano Celant, Virginia Dwan, and others), photos and footage of Walter De Maria, Michael Heizer, Robert Smithson, Nancy Holt, and Charles Ross at work on their astonishing creations: Heizer’s Double Negative, a 1,500-feet long “line” cut between two canyons on Mormon Mesa in Nevada; Holt’s concrete Sun Tunnels, through each of which the sun appears differently according to the season; De Maria’s The Lightning Field in New Mexico; and Smithson’s Spiral Jetty, built on the Great Salt Lake in Utah. A beautiful tribute to a great moment in art.

We Are Alive / On est vivants
Carmen Castillo, France/Belgium, 2015, DCP, 100m
French, Spanish, and Portuguese with English subtitles
What comprises political engagement in 2015? Is it still possible to influence the course of events in this world? These are the questions posed by the great Chilean filmmaker Carmen Castillo (her Calle Santa Fe was a selection of the 2007 NYFF) in this new documentary essay. Castillo, herself a one-time MIR militant expelled from Chile by the Pinochet regime, structures her film in dialogue with the writings of her late friend Daniel Bensaïd, organizer of the Paris student revolts in May ’68 and France’s leading Trotskyite philosopher. In Europe and Latin America, Castillo finds the ones who have resisted, from the masked Zapatistas of Chiapas in Mexico to the Water Warriors of Cochabamba in Bolivia, from the Landless Workers movement in Brazil to the striking workers at the Donges refinery in western France to the homeless squatters of Marseille. A mournful premise lays the groundwork for a radiantly hopeful film. North American Premiere

The Witness
James Solomon, 2015, USA, DCP, 96m
On March 13, 1964, in Kew Gardens, Queens, Kitty Genovese was stabbed, raped, robbed, and left to die by a man named Winston Moseley. On March 27, at the urging of Metro editor A.M. Rosenthal, The New York Times published an investigative report asserting that 38 eyewitnesses saw the attack and retreated to their apartments, and the case quickly became a symbol of urban apathy. Genovese’s family lost her twice: once to a murderer and once more to legend, a legend that would be questioned, dismantled, and discredited 40 years later in the very paper that had created it. James Solomon’s quiet, concentrated, and devastating film closely follows the efforts of Genovese’s brother Bill, 16 at the time of Kitty’s death, to track down the people who knew her, loved her, and tried to help her, to arrange a possible meeting with her killer, and to recover the presence of his beloved sister. A Submarine release. World Premiere