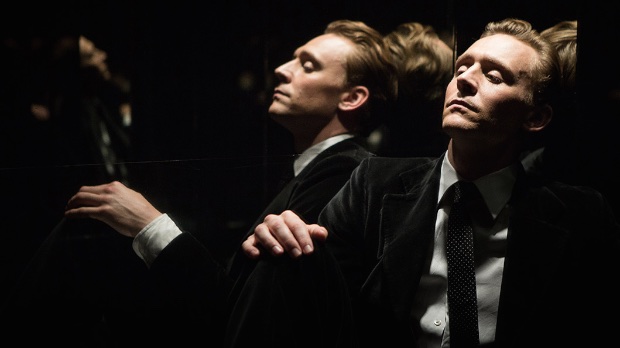 Toronto seemed the perfect place for Ben Wheatley’s High-Rise to have its world premiere. The J. G. Ballard adaptation stages a class-war in an ultra-modern high-rise, and the theater where it played Sunday night is only about a mile from the luxury condo developments that tower over Toronto’s waterfront, which suggest a modern Eden in shiny glass and steel but have instead exacerbated the city’s homelessness problems and real-estate bubble. Another felicitous detail to the evening: the screening was sponsored by Visa and before you could take your seat to see Wheatley’s commentary on class and capitalism, there was a tiered queue dividing those who had and hadn’t a Visa Infinite® card.

High-Rise begins at the end, with Tom Middleston amidst ruin and bloodstains, roasting the leg of a dog on a spit, so when his character Dr. Robert Laing first moves into the building, we already know where things are headed. Upon arriving, Laing quickly learns the class politics of the monolithic Brutalist building — the richest are on the highest floors, the poorest on the lower floors. He’s summoned by “the architect,” a God-like Jeremy Irons dressed all in white with a limp, living with his wife in the luxurious penthouse complete with gardens and a horse, and who dictates some ominous lines about how we’re the architects of our own demise. Sex, violence, and retro-modernism are everywhere, even before anarchy breaks loose in the building. Laing gets brusquely tossed from an upper-class party, a fist-fight breaks out in a lower-class party. He starts an affair with the single mother on the floor above him who doesn’t seem to mind fucking where her son can see them. Eventually, the power goes out in the building and all hell breaks loose.

Wheatley loves montages and slow-mo. It’s very hard to tell how much time has passed in the film == how long Laing’s lived there before things go awry or how long the power goes out for — but it’s fun to revel in all the violence and destruction Wheatley has so stylishly rendered. In its best moments, the film harkens back to Metropolis and A Clockwork Orange. But there’s a fundamental lack of character development in the adaptation. Wheatley and his screen-writing partner Amy Jump have a tendency to eschew traditional exposition. The result here is that I found myself confused who to root for in the power struggle or often felt like the film was framing me to bolster characters that hadn’t proved themselves likable. The conceptual core felt weak too. Themes like surfaces and modernity are introduced early on but then abandoned like the garbage bags that keep piling up in the building as chaos envelopes the residents.

The film’s angst is best expressed in its graphics — Laing’s bronzed body sunbathing on a rectangular cement balcony or the oppressive sea of candy-colored cars in the parking lot. Through its dystopic 1970s vibe, the film gets at an urge for order gone wrong, a perversion of planning. The same is true of Yorgos Lanthimos’s The Lobster. In that film’s nightmarishly drab near future, the color palette is more subdued than High-Rise but ’70s silhouettes, mustaches and turtlenecks carpet a world structured by an absurd bureaucracy, in which being single is illegal and loners are hunted down and turned into animals.

The story begins as Colin Farrell’s character checks into the hotel where single people are given 45 days to fall in love with one another, and if they fail to find a match, they are given a choice of which animal they are turned into. Farrell says he’d prefer a lobster. Leisurely sessions of swimming and squash playing are intermittently interrupted by hunts, in which the hotel guests stalk the rebellious loners who live in the forest surrounding the property. When guests successfully shoot down the loners with tranquilizer darts, they are rewarded with extra days to find a suitable partner.

The film’s first act is both curious and compelling as it introduces this strange world where true love is seen as having one distinguishing characteristic in common, whether that’s frequent nosebleeds or heartlessness. It gets into trouble, however, when Farrell escapes the hotel and joins the loners. It’s a bit tiresome to be introduced to a second whole world with its own order and rules so shortly after we were ushered into the first one, but here in the forest we learn, love is completely forbidden and punished gruesomely. Most of all, my problem with the film was after setting up a critique of complicit coupledom, the second half of the film just becomes a predictable love story. Farrell’s character falls for another loner played by Rachel Weisz. And for the rest of the film we are just supposed to root for the success of their union in spite of the forces trying to keep them a part, most notably the leader of the loners played by Lea Seydoux.

There’s an absurdist weirdo mundane melancholy to The Lobster that feels not unlike a Charlie Kaufman film. A marked difference, though, is that Kauffman is exceptionally good at writing satisfying third acts. And while were in the neighborhood of comparisons, I think Kaufman’s decision to express alienation through stop-motion’s uncanniness in his newest film Anomalisa, directed with Duke Johnson, feels particularly refreshing in a world where we are constantly bombarded by fashion films, music videos, and high-end ads with the same stylish constructions of alienation that Wheatley and Lanthimos rely on in their visual vocabulary.

Anomalisa arrived at TIFF having just won the Jury Grand Prize in Venice days before. It’s a tight 90 minutes, and much more straightforward in narrative and its use of time than Kaufman’s directorial debut Synecdoche, New York. The story begins with a middle-aged celebrated self-help writer arriving in Cincinnati for a business trip. He’s Bill Murray in Lost in Translation basically, a lonely married man in a hotel looking for an affair. Except he and everyone else have these weird mask-like faces; they seem to be made up of ill-fitting pieces, the seams in their faces flickering in and out of view. This weird world of animated miniatures made me think back to the puppets in Being John Malkovich and Jan Svankmajer films.

After Michael’s first attempt at cheating on his wife with an old flame flops — he obviously was callous and selfish in how he exited that relationship — our principal puppet, still delirious for validation, frantically knocks on the door of other hotel rooms on the floor. He finds two middle-aged phone operators who are in town for his talk the next day and who fawn over him and how smart he is. Of course they want to get a drink. Of course Lisa, the more insecure of the two, wants to go back to his room with him. There’s something about her voice he tells her. He insists everyone else sounds exactly the same. (They really do. David Thewlis voices Michael, Jennifer Jason Leigh voices Lisa, and Tom Noonan voices everyone else).

Back in the room, Lisa sings an a cappella rendition of Cyndi Lauper’s “Girls Just Wanna Have Fun” which gave me goosebumps. There’s a truly tender sex scene between the two puppets. This is the heart of the film. Then we are reminded Michael is narcissistic, delusional, paranoid, and that he will never be happy, kicking off the final act of the film. It’s dark. It’s also maybe the most human film I’ve seen this week, and it doesn’t have any humans in it.