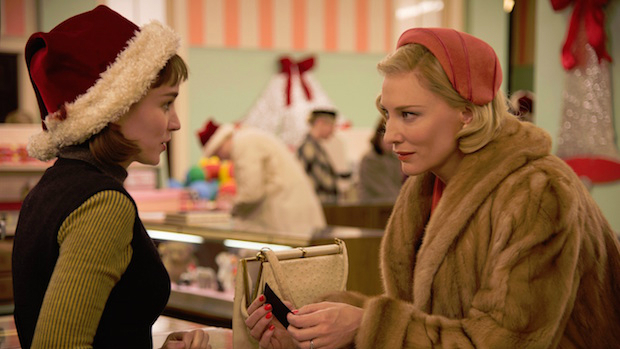 At no point in Todd Haynes’ Carol is the word “lesbian” heard — nor “homosexual,” the now-arcane “homophile” or any other period-appropriate descriptor of the LGBTQ spectrum. This is the love that literally dare not speak its name, a conspicuous absence viewers will automatically fill in (especially after seeing dozens of headlines and articles bluntly/reductively identifing the film as a “lesbian drama”). Depending on your POV, this resistance to labeling is either an accurate depiction of period repression, or oddly up-to-the-minute given increased aversion to categorical sexual labels and regular terminological resets.

As in Safe, Far From Heaven and Mildred Pierce, the female protagonist is in an unsatisfactory marriage with a man who’s more angrily incomprehending re: his wife’s growing distance than deliberately malicious. Well-off Carol Aird’s (Cate Blanchett) ex-husband Harge (Kyle Chandler) finds it impossible to accept his wife’s attraction towards other women. He’s a negative force throughout: drunkenly lunging for Carol, bullying her into holiday dinner with his family, always holding the threat of a change in their custody agreement over her head. The romance between Carol and department store sales clerk Therese Belivet (Rooney Mara) is predicated on accepting that there are real, non-negotiable consequences, both legal and social, for maintaining a non-hetero relationship of any kind; the film has no interest in dramatizing historical wrongs of the ’50s by offering characters opportunities to fight back, thereby vindicating present-day viewers for knowing better. How are a relationship’s opening stages negotiated when public life is a near-impossibility? How can feelings blossom under these circumstances?

The answer: tersely, euphemistically (custody disputes frame the question of Carol’s fitness as a parent in terms of moral inquiry rather than homophobia), and by elision. The attraction — two eyes locking across a department store floor — is instant, undeniable and unperceived by all around them, but it’s verbally initiated through innocuous Christmas-gift-purchasing chat. In a classic (yet innocent-looking enough) flirtation gambit, Carol leaves her gloves on the counter. When repeated meetings and fleeting touches raise unavoidable questions, Therese is unsure how to proceed: “I want to ask you things, but I’m not sure you want that.” “Ask,” Carol emphatically groans, and Haynes cuts immediately to Therese’s apartment building rooftop some time later, when any actual discussion of the sexual nature of the relationship or its verboten status has already concluded.

Therese pals around with a group of doofus-y but amiable enough intellectuals, the kind of affably affected young men that cluttered the pages of The Recognitions and the party in Shadows. After work, sometimes the gang goes to a movie theater where a friend’s the projectionist and watch from the booth. For one young man, their viewing of Sunset Boulevard is his seventh, and he announces that he’s concentrating on “‘the correlation between what the characters say and what they really mean.” This is one of Haynes’ rare forays into overstatement, a nudge for viewers who might not be up to speed to scrutinize his narrative’s seemingly blank spaces and carefully parse character interactions.

Far From Heaven approached the ’50s through Sirkian pastiche, outrageously saturated color palettes and all, but Carol‘s visual language uses tools from later periods (lots of slow zooms) to suggest that the gaze here is, despite verbally going along with the decade’s decorum and evasion, decidedly modern and not complicit with the era. This recreated NYC is stunningly immersive from the opening shot, which slowly lifts from a grate in Grand Central Station to follow a man out of the station, into the street and around the corner, craning higher and higher to show off a number of extras, period cars, etc. The feeling of a real, extant world is intensely expansive, and — if you’re the kind of viewer who looks at how money is distributed on-screen — seemingly impossibly expensive. (One answer as to how this is possible: this “NYC” is actually constructed in Ohio.) It’s simple enough to save money by shooting car scenes in such a way that the exteriors can’t be seen, as P.T. Anderson did recently in Inherent Vice when placing the camera tilting up from the passenger seat at Joaquin Phoenix, with his head entirely blocking out the non-set-dressed streets. No such efficient cost-saving measures for Haynes, who goes so far as to have a scene of Carol driving out of the city on a crowded highway, tracking along with her left to right while making sure we see all of the cars on the road. Production values-wise, this is impeccably resourceful, totally enveloping work.

It’s perhaps significant that the opening shot finds its initial follow-along subject in a man who turns out to be a very minor part of the narrative, suggesting a kind of termite quality in Carol and Therese taking the center stage away from the straight men who dominate so many narratives. Carol is deeply felt and terribly romantic, with the emphasis on “terribly”: it’s possible to think of it as an updated Brief Encounter, famously a masochistic cult classic for queer viewers who’ve mentally substituted queer love for adultery. Given that the films are structurally identical — bookended by a shown-twice meeting between parting lovers suddenly interrupted by a minor, irritating character who has no idea what’s going on — I’m guessing the allusion is intentional. But there’s a tonal twist (and this feels like a spoiler, possibly): I would never have expected something like a happy ending, given both the narrative circumstances and Haynes’ general predeliction for the gloomily unresolved, but there’s something like one, and it’s a stirring surprise.

I’m far less clear on what’s going on in Hou Hsiao-hsien’s The Assassin, though will do my best to hazard some preliminary guesses. Though billed in advance as a wuxia film, I’d be shocked if there were more than 10 minutes total of fighting in The Assassin, and the longest such sequence can’t possibly exceed two minutes. Despite the misleading inclusion of an expository historical title card along the lines of what the Weinsteins are prone to slapping on top of their recut HK acquisitions, The Assassin is probably more usefully thought of as an amplification and exploration of the background historical texture of such films, with much more expensive sets and access to far more natural light than the Shaw Brothers were ever able to pony up for. You’re here for immersion in a world that often is presented as a codified series of shorthand historical tropes of less importance than the choreographed fights. Instead of wirework (there’s maybe exactly one leap off a rooftop enabled by that), you get sequences showing exactly how servants prepared a hot bath during the Tang Dynasty, a state’s governor playing with his infant son at length, scores of warriors tramping through the mountain-surrounded woods (echoes, probably deliberate, of the tramps taken by the Taiwanese fighters in Hou’s Good Men, Good Women), et al.

I’d summarize the plot, but I’d do a terrible job. There is, indeed, an assassin, a governor of a Chinese province she’s supposed to kill, and a lot of court intrigue. By the time The Assassin was 90% over, I felt like I’d finally caught up with what was happening half a movie ago. I suspect this narrative fracturing is deliberate, in keeping with Hou’s more aggressively modernist films (i.e., this is more City of Sadness than Flight of the Red Balloon). The fights, brief as they are, are often introduced the way horror films allow boogeymen to suddenly emerge from offscreen, with great unnerving foley thwacks underlining brief combat. Visually, the film’s greatest setpiece is nearly abstract and entirely non-violent: the assassin enters a room whose doorway and beds are draped in hanging veils, and skulkingly listens to a conversation. The intricate patterns, diffusions and obstructions created by these overlapping veils’ movements (meticulously managed, I assume, since the assassin becomes clear at crucial moments of emphasis) make the ostensible randomness of wind a meticulously controlled part of the filmmaker’s tool kit; very Tarkovsky.

The court sets are massive and impressive, though at times the feeling can be rather like a Chinese soap opera set in a historical period. I found it helpful to remember during outdoors sequences that Chinese landscape panorama scrolls are a key point of visual reference for Hou: people are being used as points of scale to illuminate the vastness of the terrain they’re passing through, rather than occupying the center of the narrative per se. But I’ll confess to finding my minute-by-minute reaction often returning to the question “Why?” Not “what is happening?” — a little/lot of obliqueness never hurt anybody — but why individual aesthetic choices were being made. I’m a big fan of many Hou’s films, but this one left me outside in the cold. A must-see, of course: the film feels carved out of an unwieldy mass of material into a shape whose forbidding contours are an admirable attempt to duck greatest hits self-repetition and find new frontiers. And yet.