In Extremis: The World of Kanako 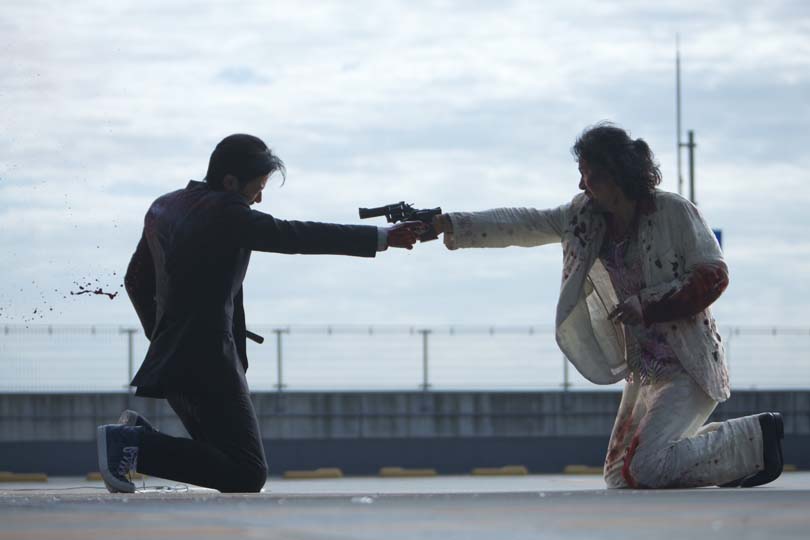 Joe Odagiri, Koji Yakusho in The World of Kanako

In loving memory of Richard Corliss, who early on championed low and high art in Asian cinema

In Lewis Carroll’s Alice in Wonderland, the sheltered titular character exposes her pre-adolescent consciousness. Willing to navigate uncharted waters, she follows a dapper rabbit, even allowing herself to fall into the hole he’s entered. Jefferson Airplane sticks with this plot point in the ‘60s acid-anthem “White Rabbit,” adding au courant psychedelics to scramble the child’s perception: Tell ‘em a hookah-smoking caterpillar/Has given you the call. In book and song, Alice is in her element: She basks in unexpected encounters with extraordinary characters and anthropomorphic creatures.

In the hyperreal sphere of The World of Kanako, by the distinctive (to put it mildly) Japanese auteur Tetsuya Nakashima (Confessions) — as smashingly unforgettable as it is intentionally unpalatable — Alice, whose adventures are frequently read aloud by the film’s eponymous 17-year-old vixen, has a different objective from that of the young girl in the book. 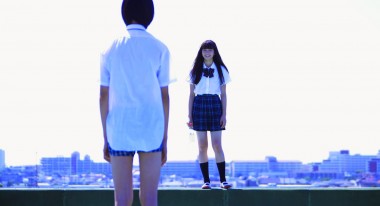 “You want to disappear!” an obsessed teen admirer, Boku (Hiroya Shimizu), tells the enigmatic, ultimately hollow Kanako Fujishima (debuting ex-model Nana Komatsu) on the playground rooftop of their school, just at the moment he absorbs the significance of her long-term goal. (He’s getting warm, but off-base: He projects his own death wish onto the object of his affection, who is far too narcissistic to commit such a facile and vulgar vanishing act.) She does want to fall, but in the existential sense, and on her own terms. For her, to cease to exist is to gain, in her words, “complete freedom.”

It comes at a high price. She must relinquish all ties, isolate herself. She needs solitude, not the comforting bonds prescribed by lonely Victorian mathematician Carroll or the more extroverted flower children of the Airplane. This devil in disguise, she of the non-stop smile and creepily angelic laugh, must calibrate a violent and complex collision course for intimates and powerful authorities, baggage that might otherwise block her chosen path.

The first casualty of ken eradication is morality. Kanako takes her cues from her troubled, unethical father, Akikazu (incomparable veteran actor Koji Yakusho, barely recognizable from his roles in Shall We Dance?, The Eel, and Tokyo Sonata). Each is the embodiment of destruction, but conversely. (In a curious and curiouser case of synchronicity, Thanksgiving Day marked the 150th anniversary of the novel’s publication — one week before this sensorial bombardment of a movie opens in the U.S., courtesy of the curatorially-tinged risk takers at Drafthouse Films.) 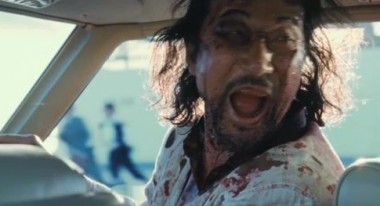 A former detective fired for alcoholism and irrational violence (he is diagnosed as schizophrenic and manic/depressive), Akikazu is reduced to laboring as a night security guard at a convenience store. He himself plunges into a maze of inscrutable people and odd coincidences during a desperate quest to find his estranged daughter following her sudden disappearance, which he learns about only after a hysterical call from his even more estranged ex-wife. A disrespectful, self-designated outcast, he might be the model for his only child’s desire to withdraw except for an interfering Achilles heel: He needs connection. Unfortunately, violence is the only means he is comfortable with in his pitiful attempts to obtain it.

A short prologue prepares the viewer for the picture’s continuous contradictions, which serve as both structuring devices and social commentary. In profile, Kanako breathily but unconvincingly whispers in her father’s ear, “I love you!” In the next shot, he yells at her nastily, “I hate you!” Then, on a black screen, we read a quote from Cocteau: An era is only confused by a confused mind.

We surmise two things: The jolting oppositions of the initial shots do not represent any kind of reality — in fact, the words are the reverse of what they mean — but instead, two unbalanced mental states; and we are in for a confounding, spectacularly unconventional film, one not easily deciphered, perhaps undecipherable. 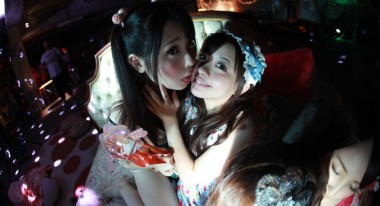 It is almost impossible to write a synopsis of this masterful, pulsating film, comprised as it is of overlapping, inconsistent time and plot lines and rapid cutting (by genius editor Yoshiyuki Koike), dizzying widescreen camera work (by Shoichi Ato), short takes, textual inserts (often signaling time down to the second, or complete temporal shifts), animation, blinding fish-eye shots of mod parties, music from the ‘60s and ‘70s both disconcerting and evocative of old exploitation movies, and ambiguous reasons for action by pretty much completely unlikable characters. Let’s take that last one a step further: The World of Kanako (the Japanese title translates as Thirst) is an entropic celebration of misanthropy.

To soften the nihilistic bent just a teeny weeny bit, Nakashima throws in a modicum of over-the-top dark humor. He makes jokes of two of the major players. But can you significantly diminish the impact of enabled, guiltless killings by Detective Asai (a delightful, handsome Satoshi Tsumabuki), a smug, calculating man-child dressed to the nines who brandishes a signature lollipop in his mouth? Or of serial rape and other brutal actions against women at every opportunity by the unhinged Akikazu, an unattractive, disheveled counterpoint to Asai and a slave to ineffective psychiatric meds who is unable to restrain his aggressive impulses?

To watch his incongruous egg-shell-white linen suit become more and more bloody as he becomes more and more beaten up — its increasingly battered state is a barometer of his investigative progress as well as his psychological condition — is, however, mildly amusing, especially because the intense red is an almost hilariously nifty fit with Nakashima’s richly saturated and coordinated color scheme, the backdrops for filthy stand-alone words and tripled or quadrupled head shots of Akikazu the same hue. The meticulous precision of the shamelessly artificial splatter images recalls the work of Korean director Park Chan-wook, especially Sympathy for Lady Vengeance. 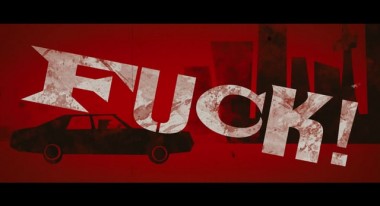 Let’s be clear, though: Even the most naturalistic shots can turn out to be pieces of an extended dream or a subjunctive if/then scenario. Reality and fantasy overlap; at times, they nullify each other. The oneiric component correlates with Kanako’s longing to fade. It is at the baseline of the narrative. Mostly filmed in ethereal soft focus, she tells the beguiled Boku that she lives in a dream, on a different plane from others. “There are no rules in a dream,” she says. “I can do whatever I want.”

The principal thread of the film might have served as the backbone for a straightforward policier. Akikazu had been a cop of the old school. It’s natural that he proceeds according to the dated playbook he worked with: checking for clues, running between interviews, following the money, visiting potentially revealing locations (including an outrageous, drug-driven club and a cheap, nondescript hotel). He misses the train when he refuses to accept that she has jumped the track. The tarnished ex-detective/father has been looking for a virginal lost lamb who maybe was influenced by a bad crowd, but discovers that she is in fact a slick operator who quietly pulls underage schoolmates into prostitution and earns additional money dealing drugs.

Simplicity is not part of the equation here. Forget linearity. Interviewees lie, so we are exposed to several versions of truth. One valid tidbit is a girlfriend’s description of Kanako: “She says what you want to hear, then draws you in and destroys you.” Former schoolmate and bully Matsunaga (Mahiro Takasugi) resurfaces three years on as leader of a gang of thugs, graduating into the blackmail of prominent elderly men with compromising photos in which they bed barely pubescent boys. (Whether evidence, tools for identification, or mementos, photographs regularly pop up.) Enter the dreaded yakuza, pursuing both Matsunaga, for alienating some of their top clients, and Akikazu, merely a surrogate to blame for the sins of a daughter who snitched. 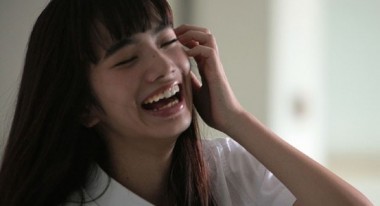 While the two gangs battle it out (the yakuza honor rules, which are anathema to restriction-phobic Kanako), the corrupt cops under Asai’s command monitor all of their actions. Akikazu breaks into the home of the hit man Aikawa (Joe Odagiri), hired by someone high in the hierarchy, only to discover a happy family like one he might crave. An extended, mind-boggling fight scene, with guns, knives, and cars as weapons, takes place between the two men on a highway. (They are doubles for each other: You don’t stop in the middle of a police case or a contracted assassination.) The endless snow-covered ground outside of the city that serves as the ultimate location fails to balance out the urban dirt we have witnessed.

All the while, Kanako manipulates the heads and hearts of two bullied boys: young Ogata (Shono Hayama), and Boku, who is slightly older and more or less an iteration of the kid. The guys wax poetic trying to describe and impress the heartless tease. Things become tragic. What we can not be certain about is why she plays her father. Short flashbacks suggest an earlier rape; others, just a beating. (In the novel, he rapes her, and the act motivates everything she does thereafter.) In the film, cause and effect are, like the girl, heavily masked.

Every so often Nakashima reminds us that we are in the midst of the holiday season (the film begins on Christmas Eve), with brightly lit stores as backdrop for foregrounded revelers. He shoots details of a church interior, including worshipful close-ups of saintly statues. As with the uninterrupted sheets of snow, the purity is moving. In the context of the film, however, it is an illusion as gorgeous as Kanako herself.