Of Human Bondage: The Big Short

Adapted by Charles Randolph and Adam McKay from The Big Short: Inside the Doomsday Machine, Michael Lewis’s behind-the-scenes book about the 2008 housing market crash, McKay’s star-stuffed The Big Short is a brilliant demystification. Two scenes, hilarious in completely opposite ways, take place in the middle of an otherwise enervating securitization session at the American Securities Forum in Las Vegas. Hold on: hilarious and securitization jammed into the same sentence?

Most people don’t even know what the latter word means. When a term completely sidesteps consciousness, it is probably unavailable to the unconscious—site of the split-second manufacture of humor. To compensate, however, the ever-dependable Steve Carell fuels the jocularity in both spots. He plays pushy, unpolished idealist Mark Baum (in the actual story, Steve Eisman), a hedge-fund manager who runs Morgan Stanley subsidiary FrontPoint and one of the assorted financial-industry outsiders — misfits, to be accurate — who populate and invigorate the film.

The first scene is predicated on the comic potential of repetition overkill. In order to challenge an arrogant but respected trader’s optimistic — and totally incorrect — assurance during a lecture to nervous colleagues that “losses in subprime are being contained at five per cent,” Baum gruffly interrupts him with rhetorical questions over and over again. 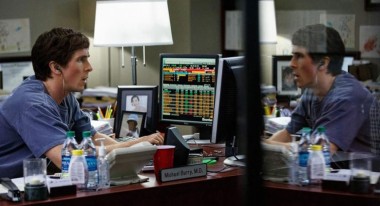 The second depends not on verbiage but on precision timing. Warming up for Alan Greenspan, Baum sits on a stage set up for debate with cocky Bruce Miller (unearned certitude seems to be the norm with these people) of Bear Stearns. A committed insider, Miller, after reassuring the audience that all is well with his company, throws his lot in with the first trader: Subprime mortgages are in no way out of control. In the middle of his smug oration, all the Blackberries in the large hotel hall start to vibrate simultaneously, sounding like a well-orchestrated chorus of desperate crickets. Once they find out that Bear Stearns’s stock is rapidly plummeting, the listeners are no longer captive. Watching everyone scramble for the exit, the quick-thinking Baum mutters presciently, “Ordinary people are going to have to pay for this.”

McKay (Anchorman, Step Brothers, Talladega Nights) knows from funny. Former head writer for Saturday Night Live, his feature work before The Big Short barely touches on anything heavier than Will Ferrell’s lovable awkwardness. He goes with whimsy here as well, while methodically dissecting and castrating a famously boring industry that safeguards itself with an incomprehensible vocabulary. The cliché “knowledge is power” holds: Control remains concentrated in the hands of a small specialized circle.

McKay neither glosses over esoteric terms nor instructs characters to simply and directly explain them inside their usual haunts. Wisely and productively, he creates amusing, surreal tableaus outside of the main narrative that are more suggestive than definitive. Ironically Brechtian in an ubercapitalist context, these unpretentious and viewer-friendly distancing devices are accessibly democratic and, of course, marked by extensive comic edge. (It’s one thing in an ensemble with so much star wattage for actors to settle for lower billing than they are accustomed to, another for them to refrain from chewing up the scenery in order to magnify their presence. But cast to alienate the adoring masses who they count on to embrace them? These pros do it, nothing more and nothing less, in order not to upset the film’s carefully calculated balance.)

Take these examples: To sum up credit default swaps (investing in the failure to repay, a financial instrument that shorts the booming housing market), Ryan Gosling breaks the fourth wall and, sounding like he has swigged a couple cans of Red Bull, addresses the camera — and the spectator — head-on. Margot Robbie also deploys direct address of a breathier nature to aid in understanding mortgage-backed securities (stacking a bond with bad mortgages). In case anyone doesn’t grasp the M.O., she lounges in a bubble bath sipping champagne. 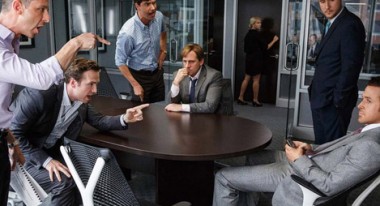 Here is an incongruous, dadaesque set-up. Selena Gomez is paired with behavioral economics expert Dr. Richard Thaler, who elaborates on collateralized debt obligations (repackaged individual loans sold to investors in the secondary market, with promised repayment of the loans the collateral giving value to the CDOs) and the enabling tranches: layers of subprime home loans (bad mortgages for which an unqualified borrower is expected to foreclose), which prop up the mortgage bonds, though no one really knows what’s inside them. Got that?

Gomez, surrounded by gamblers making side bets, sits at a table in a casino with a large stack of chips, her cards a formal rhyme to the domino effect of the side bets on mortgage-backed securities through CDOs that drove the world’s economy to the brink. Then there is celebrity chef and contemporary explorer Anthony Bourdain preparing a seafood stew with one nasty, ruinous ingredient to clarify how the inclusion of toxic assets in collateralized debts can still falsely recast their value — upward, naturally.

I think McKay considers public education about the world of finance an important step toward preventing a recurrence of the crash. Ignorance allowed it. Financial experts refused to acknowledge the bubble. Truth is, however, only seven years on, we are already witnessing a return to the bad habits that precipitated the initial ripple that went worldwide.

Bailouts saved most of the corporate and government big machers. (Baum was the first to recognize to what extent.) Only one person served time. About the victims, Baum was again right on the money. McKay underlines with a coda in text detailing the extent of the damage in the U.S. alone: six million foreclosures, eight million jobs lost, and five trillion dollars unaccounted for.

San Jose-based hedge-fund manager (Scion Capitol) and former neurologist Michael Burry (Christian Bale), an oddity with Asperger’s, a glass eye, and an addiction to heavy metal and drum playing, combs through thousands of mostly subprime loans and uncovers the time bomb of the aughts. While brushing his teeth, he decides to short the housing market, i.e., to bet against the undeserved loans’ chances of success. He hustles to the banks and other financial institutions to explain what is happening, but he is ignored. So he buys credit default swaps, paying off the premiums until the mortgages necessarily fail.

A few other outsiders, like the observant, slick, expensively bewigged Deutsche Bank trader Jared Bennett (Gosling), based on the real-life Greg Lippmann, suspect as much (“I smell money”). Baum, right after making the observation, “Everybody’s walking around like they’re in an Enya video,” decides to hear Bennett out. After the latter explains what he calls “shady shit fueled by stupidity,” Baum calls Bennett’s proposed alternative “a fraud,” then jumps on board with his three eager-beaver acolytes (Rafe Spall, Hamish Linklater, and Jeremy Strong). He realizes that there is indeed a housing bubble while hearing a five-home-owning stripper recall her irresponsible borrowing practices during a pole dance. He relinquishes any doubts. These men opt to profit from the impending collapse that Burry has charted: They bet against the U.S. government.

Young bucks and novice investment partners Jamie Shipley (Finn Wittrock) and Charlie Geller (John Magaro) smell an opportunity after the major institutions shut them out. To gain access to the inner circle, for which they need something called an ISDA agreement, they latch onto a retired mentor, banker Ben Rickert (Brad Pitt), the film’s most reliable moral compass, who figures out the most profitable and efficient way to operate. They check out the foreclosure situation in Florida. Some scenes mirror the sad plight of displaced families in Ramin Bahrani’s 99 Homes. In theory, the process can reverse itself should they choose to sell their swaps. It turns out not to be that easy.

Some of these suits do have a social conscience, but none is fully kosher. Several are horrified to find that even ratings agency Standard & Poors is in bed with lending institutions to declare subprime mortgages valid. Why? To stave off competition. In book and film, these characters are neither glorified nor chastised. For all their gifts and faults, they appear authentic. Granted some are stock characters, their defining quirks overly simplistic: for starters, Rickert’s back-to-nature philosophy and Bennett’s voracious appetite to win at any cost. 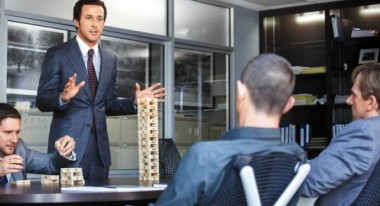 We are privy to little of their private lives, except in the case of Baum. Guilt over his cash-strapped brother’s death is a complex moral dilemma, as is the ethical agony he undergoes trying to decide whether to rip off the little man he prides himself on championing or to profit on his lonesome. We also get a few gratuitous glimpses of Burry’s conventional domestic life, most likely to offset his general atypicality. The various depictions form a catalog of distinctions in the hierarchy of the financial world’s movers and shakers. They might be far out or simply a matter of tailoring: Burry’s bare feet versus Bennett’s spiffy designer shoes.

McKay is highly indebted to DP Barry Ackroyd for helping him create an anthropological model of corporate finance. The British cinematographer gives the actors lots of space to play out their parts and to take advantage of McKay’s penchant for improvisation. He sometimes sets cameras up in more than one place, so that the actors do not know who he is shooting. Within the limits of their defining traits, an individualized sensibility emerges. Bale is the exception: He spends all his time alone in his office or home.

Ackroyd, best known for his verite work with Ken Loach, moves the camera in naturalistic fashion, close in on his subjects as if he were both prodding and confiding. The strategy is direct and breezy; no frou-frou or exhibitionism. According to McKay, his cinematographer constructs “a level of intimacy and urgency within the frame” so that the viewer is pulled into the action and a dynamism emerges in spite of the confined spaces. Composer Nicholas Britell’s score, melding overlapping soul, rap, rock, and heavy metal, enhances the fluidity of the visuals. Who would have thought that the financial sector could be so spirited?