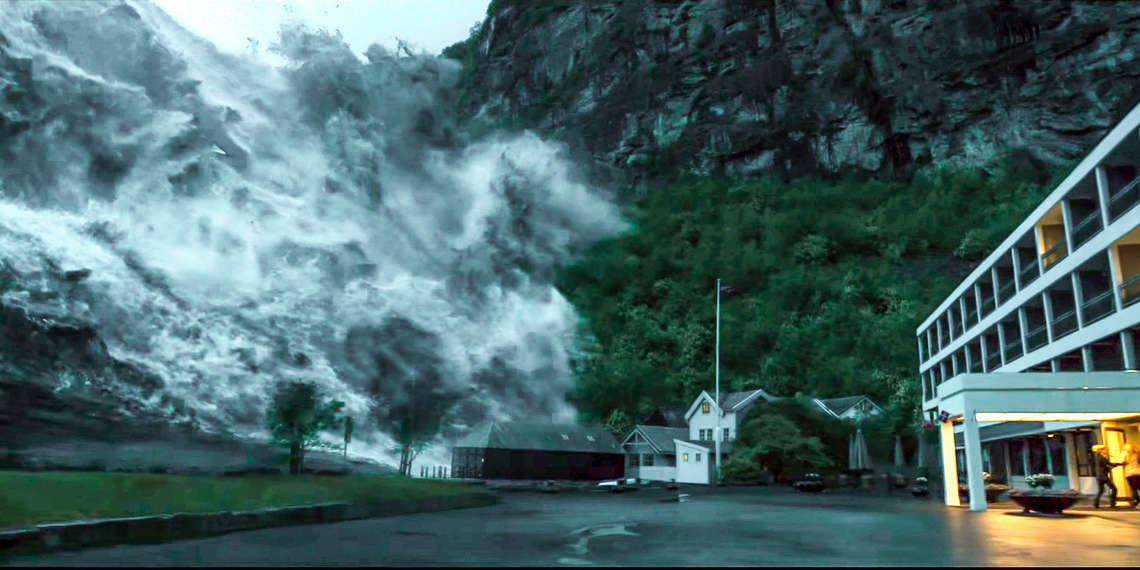 “Once these mountains grab a hold of you, they never let you go.” In Roar Uthaug’s The Wave, enervated chief Arvid Ovrebo (Fridtjov Saheim) waxes nostalgic to his handful of underlings, geologist watchdogs who command a state-of-the-art control center in western Norway that monitors the magnificent but unpredictable and ever-shifting mountains around them. It is situated high enough to withstand the brutal tsunamis that a sudden break-up can precipitate and that leave extensive damage to people and property in their wake — a phenomenon borne out by recent history. Nature is a tease: Most of the peaks abut serene, beautiful fjords — profitable lures for tourists who don’t have a clue about their part in these tragedies.

The film is bracketed by scenes that illustrate the downside of the mountains’ tenuous relationship with people literally under their sway. It opens with still black-and-white archival footage of wreckage from landslides in 1934 and 1936 that were responsible for towering tsunamis that wiped out entire villages and killed dozens. This being a full-fledged disaster movie, the final scene depicts the immobile remains of the damage wreaked by a contemporary counterpart, fictionalized but based on the very real, scientifically documented potential for a repeat performance when the precarious rocks of Akerneset contract, enabling the release of groundwater and precipitating with almost no warning an avalanche producing waves as high as 300 feet. 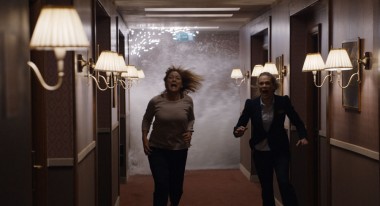 To reinforce the veracity of this imminent scenario while simultaneously building suspense, an exaggerated voiceover in the first scene asks, “Can people be warned in time?” In the last, text scribbled over images of survivors and first responders from the Norwegian version of the Red Cross dramatically reads, “It will happen!”

In between is virtually non-stop motion, an effective foil for the general placidity of the setting. (Following the disaster, when small fires are about all that marks the landscape of the village of Geiranger, its apocalyptic emptiness serves a similar function for its vanished incarnation as a kitschy tourist magnet of gingerbread structures, which smug locals ride past on their bicycles.) Carving the strategy in stone, DP John Christian Rosenlund never stops moving his handheld cameras. In tandem with a beguiling widescreen format, the film has a vertiginous feel, and not just in scenes of destruction.

The onslaught of motility begins with a rapid cut to the protagonist, the unassuming, casually hip government geologist Kristian Eikfjord (domestic star Kristoffer Joner), who is racing down a rural Norwegian version of a highway in a sporty car, restlessly shifting around in the driver’s seat and loudly singing along to a medley of recent rock hits. Uthaug is prepping his audience for unrelenting action on a far grander scale.

The film fuses conventions of the genre — the most astonishing scenes are borrowed from the standard Hollywood model, then modified, the F/X creatively executed to achieve excellent results at far less expense — with a credible dramatized situation specific to the unique geography, culture, and mentality of a Scandinavian country that, almost overnight, has been transformed by the discovery of huge oil reserves from a relatively simple, socially progressive society to a newly rich bastion of capitalism. (Would anything as banal — and effective — as The Wave’s recurring, unapologetic foregrounding of a cheap, narratively loaded plumber’s wrench assume major, make that any, significance in even the cheesiest of Hollywood disaster flicks?)

The director’s stated goal is balance. “I really didn’t want to favor the spectacular aspect to the detriment of the human element,” he says. Both are hugely present, but in a context that holds a mirror to a particularly Norwegian relationship between man and nature — perhaps the primary reason no one in the country has attempted to make this kind of disaster movie before. Uthaug elaborates:

The threat of our wild nature is something that is part of a lot of Norwegians’ daily life. But I am not sure how much we really are affected by it. It almost feels like it’s accepted as something that is just there, and that (there is) not much we can do about it. 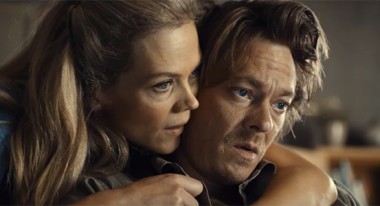 Maybe it’s odd, if an understandable, psychologically protective measure, that such potent settings can remain at all unconscious. Is it possible that this blase attitude — repression? — enables a gifted artist to elevate more easily the status of individuals against highly charged natural formations? After all, the filmmaker does paint his principal characters — Kristian and his family members — with a thicker brush than the ones typically used in the film’s studio predecessors.

Of course, the F/X that drive the spectacular segments of the story are constrained by the film’s meager $6 million budget. From that perspective, many of the “human” elements serve as filler for a genre movie which, of necessity, distributes its shocks in small, intense doses, sort of winging the rest. Throughout the production the crew relied on a combo of computer-generated visual F/X (VFX) and special F/X without digital intervention, including manual manipulation like pouring buckets of water over the actors. Even that proved to be a Sisyphean task. “It’s always a challenge working with water,” Uthaug explains. “Everything moves slower and becomes harder to control.”

Most of the more intimate details about the characters emerges while they prepare to relocate from Geiranger (incorrectly deemed safe by Kristian’s son) to the slightly more urbane town of Stavanger, where a fat-cat job with an oil company awaits the obsessive and ambitious, but occasionally spacy, breadwinner. (Could the tsunami be retribution for betraying his nation’s collective values and unspoiled terrain, selling out to the shark-like oil capitalists?)

Ennui will most likely be collateral damage for the other family members, who are much less enthusiastic about the move. They include Kristian’s practical, stunning wife, Idun (box-office draw Ane Dahl Torp); difficult, hormonally confused teen-ager Sondre (Jonas Hoff Oftebro), a committed skateboarder whose self-centeredness results in a life-and-death plight for others; and a well-behaved little daughter, innocent, red-headed Julia (Edith Haagaenrud-Sande).

Repeated shots of his distraction from the events at hand reveal Kristian’s ultimate ambivalence about the upheaval that accompanies major mid-life change. He and Idun both exhibit parapsychic gifts, which foreshadow the avalanche, although his may come from years of experience in the field, hers — flipping through tourist brochures containing images suggestive of components of such a disaster — probably from a screenwriter’s tendency to embellish, warranted or not. (John Kare Raake and Harald Rosenlow Eeg share script credit.) 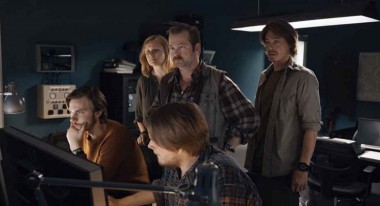 To further humanize the family, Uthaug and his writers create internal conflicts. Father and son barely speak, their uncomfortable relationship in this fear-fraught genre requiring melodramatic rectification. Kristian, with Julia, and Sondre, in the company of Idun, remain on opposite sides of the fjord throughout the ordeal.

Uthaug refuses to make his supporting characters two-dimensional constructs. Just before his departure, cocksure Kristian and his soon-to-be-former colleagues at the Geiranger station nearly come to blows over the handling of increasingly ominous developments at Akerneset they discover from computer-delivered readings taken by sensors in temperamental measuring gauges placed in the mountain’s crevices, indicating that vital cables which provide support and stability are cut. Yet each of the ordinary, non-glam workers is allowed to express his or her distinct point of view during the heated debate. (To Kristian’s horror, Arvid opts not to sound a village-wide warning, in case the ensuing panic would shorten the tourist season.)

In addition to the born leader he has proven himself to be, Kristian becomes an unusual but believable man of action once the tsunami hits. He is cheerleader for the panicked throngs attempting to reach higher ground during the 10 minutes they have between quivering onset and full activation. His quiet heroism extends beyond the disaster itself into the fallout. Running or paddling a tiny canoe, he serves as a one-man cleanup and compassion crew.

Idun has her moments as well. Working in the Hotel Geiranger as a gorgeous prop of a receptionist, she suddenly morphs from calm Nordic beauty with an edgeless Nordic personality into fierce, physically adroit warrior, in order to subdue an increasingly deranged tourist, Phillip (Thomas Bo Larsen), who threatens her son.

Rather than give away more, let’s just leave it at the recognition that one’s family in crisis is sufficient motivation for transcending conventional limitations, and that the climax in a simple cellar — which might hold the record for mouth-to-mouth CPR screen time — is brilliant as both solution and resolution. The basement is the lowest of the settings in a tragic narrative that starts amidst high peaks and drops rapidly downward, stopping just this side of a different hell.