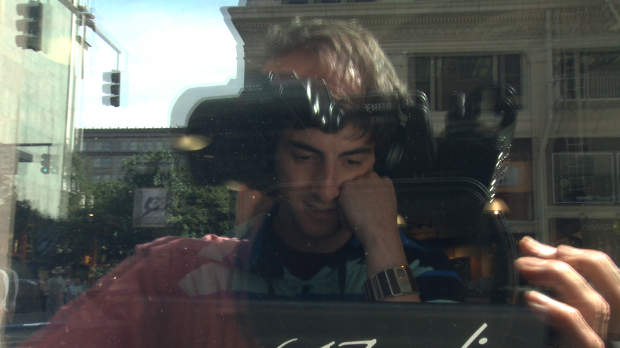 by David Licata
in Directors, Filmmaking, Interviews
on Oct 10, 2012

When Ross McElwee heeded the call to become a filmmaker in the mid 1970s, he enrolled in M.I.T.’s film program and studied with pioneering cinéma vérité documentarians Richard Leacock and Ed Pincus. Lighter, smaller cameras and advancements in sync-sound made it possible for one man to do what a film crew did not too many years before. McElwee would synthesize the lessons learned and use the new technology to create a distinctive kind of cinema.

McElwee’s films are often filed in the “personal documentary” category. Like many labels, personal documentary seems inadequate, if not downright misleading. Yes, his family, friends, and ex-lovers appear in his films. He frequently visits places in his past, and yes, he narrates and shows up in his films, but it is always to a larger purpose–nuclear proliferation in Sherman’s March, violence and media in Six O’Clock News, the tobacco industry in Bright Leaves. Home movies are personal; McElwee’s films are universal. His themes, concerns, and anxieties are our themes, concerns, and anxieties.

His tenth feature documentary, Photographic Memory (opening in New York City on October 12), continues in the same vein. McElwee’s “personal” story is the growing rift between himself and Adrian, his 20-something son who seems addicted to the Internet. In search of some perspective, he revisits the place where he spent his early twenties, a small coastal town in Brittany. Jumping between past and present, his youthful stint in France and his current home in Massachusetts, footage of Adrian as a child shot on film and footage shot recently digitally, Photographic Memory explores in McElwee’s inimitable way aging, child-parent discord, and the ever-accelerating pace of the modern world.

Filmmaker: You direct, shoot, write, edit, narrate, and do the sound on most of your films. (Though you’re not credited as the editor on Photographic Memory, and I’m curious why you didn’t edit it. Perhaps that’s a follow up of sorts.) Is the process of being so connected to all aspects of the film making process essential to your connection with the content of the film?

McElwee: Certainly in my first half dozen films, I thought it was imperative to execute all aspects of the filmmaking process. It was part of the notion of being a filmmaker in the complete sense of the word — perhaps something my peers and I absorbed in the graduate filmmaking program at MIT back in the late 1970s. And I do enjoy all aspects of filmmaking. But increasingly, it has become more difficult to author every aspect of the making of a film. For me, this has more to do with getting older and having more outside responsibilities — family, teaching, etc. If anything, with digital technology, it has become easier to author all aspects of your film. Still, with Photographic Memory, there was also the problem of deadlines. Photographic Memory was mostly funded by ARTE, the French TV network. There was a contractual deadline to deal with, which of course is how television works. But I had never made a film commissioned by television before. I shot in September 2010 and the film had to be finished in August 2011 — less than a year. So I felt I had no choice but to work with an editor. I had co-edited Bright Leaves with Mark Meatto and In Paraguay with Julie Mallozzi, and really enjoyed the experience. What a novel idea: hiring an editor! In Photographic Memory, I gave the responsibility of editing over to Sabrina Zanella-Foresi — the first time I had ever done this. (Meatto, Mallozzi, Zanella-Foresi – I never noticed it before, but they are all of Italian lineage. Am not sure what the significance of that is, but there must be one.) Anyway, I was more than willing to turn the primary responsibility of editing Photographic Memory over to Sabrina, who became a true collaborator in how the film was nuanced and shaped. But with all three editors, I was in the editing room sitting beside them every day until the film was done.

Another change for me was having a creative producer working with me from the very beginning. Marie-Emmanuelle Hartness, a friend from Cambridge via Paris, helped me conceive of the project from the beginning and was involved in every aspect of its production. She was superb. 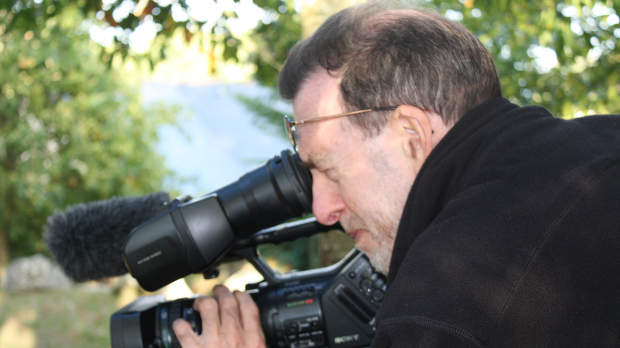 Filmmaker: One theme explored in Photographic Memory is analog technology versus digital technology. You use footage you shot years ago on film, and there is an obvious difference in the look, what I think you called “luminosity.” Audiences nowadays assume a new documentary is shot digitally, but was something irretrievably lost when the documentary world abandoned tactile film? Or is it just a question of the look — which might be imitated with some fancy camera rig or postproduction magic?McElwee: Of course from a nostalgic point of view, I miss celluloid. But I think I was using the theme of the analog / digital split in a more metaphorical sense. That is, making observations about the difference between generations. Are we really better off with digital devices and systems running our lives? In some ways, of course. In others, no. But we don’t really have a choice any more. My son shoots digital video, and now, so do I.

Filmmaker: I know a few biographers (writers and filmmakers) who have confessed that they often reach a frustrating point in their projects, a point where they become tired of their subjects, and perhaps even dislike them. I wonder if you experience this with your work? When you’re shooting or editing do you ever have moments of “ugh, her again?” or “ugh, me again?”

McElwee: I am absolutely plagued by this idea. I have always been a little skittish about about inserting myself into my films, but as you suggest it’s much more of an issue now than it used to be. To be honest, I don’t know how many more autobiographical films I have in me. But of course the challenge is to find something interesting in the world — tobacco cultivation, the Berlin Wall, nuclear weapons proliferation — and make a film about it from a personal perspective.

Filmmaker: Each of your documentaries stands alone as a separate work, but they are all strongly linked to one another as well. When you embark on a new project how aware are you of how it relates to your earlier (or upcoming) work, or are you just thinking about the project at hand?

McElwee: It sort of happens automatically, given that the filmmaker’s life is part of the film.

Filmmaker: There seem to be a lot of call-to-action documentaries being released. Do you think contemporary documentary films are losing their personal perspective?

McElwee: Perhaps, but also, perhaps this is a good thing. Sometimes I think “personal films” have worn out their welcome. But as you point out, I now have a number of them under my belt, and I think the cumulative effect from film to film may continue to be interesting to some people. Also, after 30 years of doing this, I am not sure I know how to make a documentary any other way.