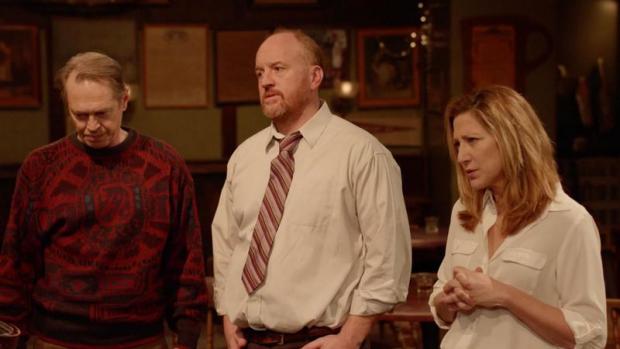 by Jane Schoenbrun
in Filmmaking
on Apr 6, 2016

The penultimate episode of Louis CK’s independent television series Horace and Pete, self-released via the comedian’s website over the past ten weeks, ends with a quote from the late Garry Shandling:

“The world is too noisy and distracted to probably ultimately survive. Everyone needs to shut the fuck up. The answers are in the silence. Monks set themselves on fire to protest and to make this point. Just consider it.”

Watching the episode upon its release, this quote gave me chills. And not just because it was a haunting encapsulation of CK’s narrative ambitions with Horace and Pete — a show that, while it might not spend too much time on literal silence, is wholly concerned with things left unsaid, that builds a world of endless, idle chatter and leaves the viewer to uncover morsels of beauty within it.

No, the quote also resonated because of Shandling’s recent passing, which had occurred just two days prior to the episode’s release. To me, watching at home, this didn’t read like a tribute tacked on at the end of the post-production process, or a snapshot of an outdated news cycle. I knew that because of CK’s unique production process for the series, in which episodes were filmed and edited (and at least partially written) in the days leading up to the show’s weekly release, Shandling’s passing was fresh for the viewer and creator alike. It felt internalized into the episode’s DNA, hanging in the air of the show’s Brooklyn dive bar just as it was in the air of my apartment.

In this moment and many others, Horace and Pete is alive unlike any television series that I’ve seen before. Yes, the show is a labored-over and carefully crafted work. but it leaves room and gains strength from the immediacy of the moment. And this is a phenomenon that pushes far beyond the show’s frequent references to current events. It’s something that seeps into the filmmaking process itself.

The show’s wonderful cast — headlined by Steve Buscemi, Edie Falco, Alan Alda, and CK himself — often seem to be improvising, as if CK has asked them to develop their characters on the spot. It’s unclear just how much of the series utilizes this technique, but as CK reveals in a recent email correspondence with critic Alan Sepinwall, at least one key scene in the show’s final episode — arguably the emotional climax of the entire series — was wholly improvised on the spot by guest star Amy Sedaris.

So when the cast and crew take their final bow after the credits of the final episode and CK declares the show wrapped, it’s not just a cute nod to the show’s live theater influence. It’s a final reminder of the show’s unique collaborative process, this time represented in a moment of shared catharsis between CK, his team, and the audience watching at home. It feels personal, homemade, special.

Horace and Pete is a show that feeds off of freedom. One that liberally shape-shifts between artistic mediums, borrowing tropes from classic television sitcoms, dramatic theater, microbudget filmmaking, and prestige dramas alike, and then fusing these elements together into a strange new form. CK seems wholly unconcerned with fitting his art into any box, or presenting a work that is easily classifiable. For instance, if you think you’ve figured out the show’s rhythms by the end of the second episode, get ready to be surprised when the third begins with a 9-minute one-shot of guest star Laurie Metcalf delivering an uninterrupted monologue that then largely carries us through the rest of the episode.

This spontaneity in subject matter, tone, and even runtime remains intact throughout the series, lending Horace and Pete a spark not found in even the most adventurous of small-screen endeavors. When CK recently announced that he would be submitting Horace and Pete as a drama for the Emmys because the comedy category carried a 30-minute time limit, it felt like a guarded dig at the industry’s outmoded and arbitrary conventions and an implicit critique of the conservatism that these conventions inspire in even the most critically acclaimed shows.

Generally though, CK has been silent about his intentions with Horace and Pete, as if adhering to Shandling’s quote. The show arrived with no warning, fanfare, or promotion beyond an email from CK to his mailing list announcing that “Horace and Pete episode one is available for download. $5. Go here to watch it. We hope you like it.” From there, episodes continued to arrive every Saturday for the next nine weeks, each with a personal message from CK, but without any context as to what this show was or why he was making it. During his sole promotional appearance in support of the show (on Jimmy Kimmel Live), CK clarified that this was part of the creative process for him, explaining that, “to me, the exciting idea was for people to see this without having any idea what it’s going to be like, without having any expectation.”

But in the age of the internet, can an auteur really hope to achieve total freedom from expectation? CK’s desire is one that flies in the face of our country’s current relationship with culture, a relationship that increasingly finds us racing to contextualize and thereby dispose of the art on our screens. We binge watch, we read recaps, and we tweet our opinions as quickly as possible, like it’s a contest.

The idea of CK proactively resisting this kind of interaction with Horace and Pete leaves the door open for something deeper, even if it takes time for audiences to discover the show. A quick Google search Monday morning revealed that Sunday night’s almost universally derided season finale of The Walking Dead already had 837 reviews and recaps online. The Horace and Pete finale (released the day before) had just two. But is this an indication of value and success? Let’s wait and see which episode is still being written about, discussed, and debated ten years from now.

I’ve often wondered why television auteurs of the so-called Golden Age have had such problems replicating their achievements. To date, the followups to many of TV’s most critically acclaimed dramas have been either paler retreads of what came before (Vince Gilligan following Breaking Bad with Better Call Saul, David Simon following The Wire with Treme, Terence Winter’s Boardwalk Empire and Vinyl following his notable work on The Sopranos) or experiments that were quickly disposed of by the networks (David Milch’s completely bonkers John From Cincinnati, or Joss Whedon’s left-field Firefly).

These artists have had trouble growing because the industry is not set up to allow them to do so. Broadcasters, streaming platforms — heck, even fans — are quick to label a TV creator’s value as if it’s something you can calculate with an algorithm. We put our artists in boxes and demand that they replicate their success. Then we bemoan the inevitably diminishing returns.

But if great art is the goal, artists need to be allowed to grow. CK’s previous show, FX’s Louie, was a wonderfully sharp autobiographical sitcom, but you could feel it becoming stale season to season. It was as if CK felt increasingly suffocated by the limitations that the show’s format had imposed on him.

With Horace and Pete, CK has uncovered a whole new air supply. To breathe again, he had to reject and reinvent his genre, his medium and his process. In doing so, he’s signaled a path forward.