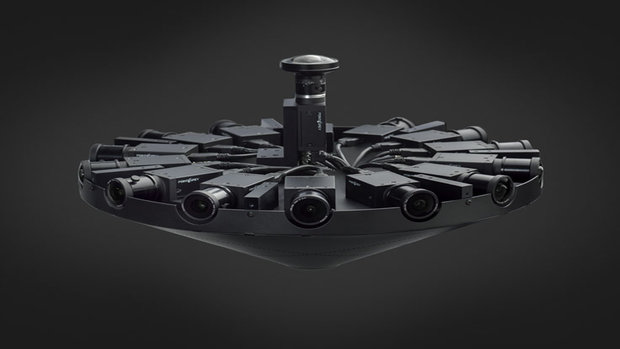 Facebook introduced Surround 360, a high-end video camera, today at F8, the company’s annual developer conference in San Francisco. In reality, Facebook unveiled a reference design for the VR video camera, which it plans to release as an open-source project on GitHub this summer.

“In designing this camera, we wanted to create a professional-grade end-to-end system that would capture, edit, and render high-quality 3D-360 video. In doing so, we hoped to meaningfully contribute to the 3D-360 camera landscape by creating a system that would enable more VR content producers and artists to start producing 3D-360 video,” said Brian Cabral, Facebook Director of Engineering in a blog post.

Surround 360, which looks a lot like a toy flying saucer, has 17 cameras total: 14 cameras around the edge, one fish-eye camera pointing up and two cameras pointing down.

In addition to the hardware, Facebook built a software program which will stitch video together to create 360-degree views. The footage can be viewed on Gear VR, Oculus (which Facebook owns), and inside the Facebook app.

The new camera can also record in 3D and produce images in 8K resolution. But don’t get too excited. Facebook engineers spent $30,000 buying the raw materials for the camera and it’s not even available for purchase. Until Facebook’s camera becomes a reality, filmmakers can research the other VR cameras on the market, including The Jaunt ONE and Samsung Gear 360, which should become available soon for much less than $30,000.