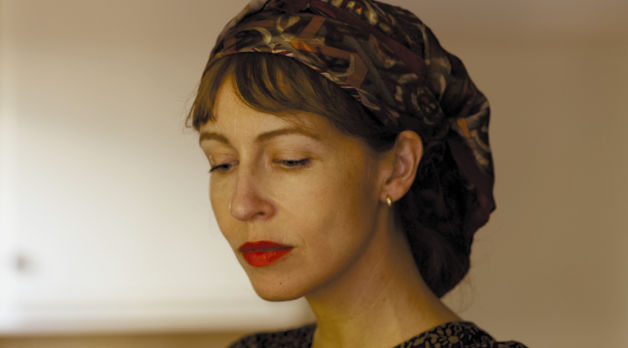 Courtney Stephens has curated series of experimental work for New York’s Museum of the Moving Image and Flaherty NYC, contributed footage to Terrence Malick’s Voyage of Time, made shorts ranging from the purely experimental to found-footage to more purely documentary and, with Pacho Velez, codirected the feature doc The American Sector, set to receive its premiere this coming winter. One potential through line is an interest in the possibilities of the travelogue. A Bay Area native, Stephens attended Berkeley to study medical anthropology rather than film. Her film education came while working in New York for a magazine that was “making fake press passes” and using them to attend screenings. Stephens then enrolled at AFI, where a short she wrote, Equestrian Sexual Response, was nominated for a Student Academy Award. But Stephens wasn’t satisfied with continuing in a conventional narrative direction. “I wanted an opportunity to explore language and realized I needed to create more interesting parameters for doing that,” she says.

In 2013, Stephens learned about a cache of travelogue home movies shot by women in the early 20th century, which became the subject of an hour-long presentation, “Terra Femme,” that she’s delivered at locations including the Royal Geographical Society and Union Docs. “The home movie domain was an area in which women had cameras and were able to convey their point of view when there weren’t that many women filmmakers, especially nonfiction,” Stephens notes. “I became interested in it as a record, then became interested in the female gaze and whether or not that’s a thing that we can talk about.” Around the same time, Stephens joined a friend on a train journey that led them to Ghost Ranch in New Mexico, site of one of Georgia O’Keeffe’s residences. A park historian told her most visitors were divorced women. “This is a pilgrimage site,” says Stephens. “Just what do people want from this place? There isn’t a crazy long history of females against the wilderness. There is man against nature, so I was thinking: What is that energy for woman outside society? What are the role models there?” The playful resulting short, 2014’s Ida Western Exile (named after the famed painter’s lesser-known sister), juxtaposes original landscape footage with archival O’Keeffe interviews. The audio is dominated by calls placed by actress Prentiss Benjamin to various phone lines, asking where to buy zombie machetes and other safety-related concerns.

The American Sector began when Velez was working on The Reagan Show (codirected with Sierra Pettengill). Spending time at the Reagan Library, where a piece of the Berlin Wall rests, Velez started wondering where other slabs might be. That expanded into a number of road trips, with the original plan of making a landscape film where voices weren’t so important. Stephens came along to record sound, and her offscreen voice — curiously interrogatory, open to hearing a cross-section of people’s idiosyncratic responses to the Wall and what it means — is crucial to the film’s tone.

Combining an interest in “female interior life projected into landscape,” Stephens is springboarding off trips to Utah and British Columbia to start thinking through a narrative feature project, which she describes as “sort of environmental/feminist sci-fi. Right now, I’m thinking a lot about rocks and fossils.” — VR/Photo by Ahsen Nadeem