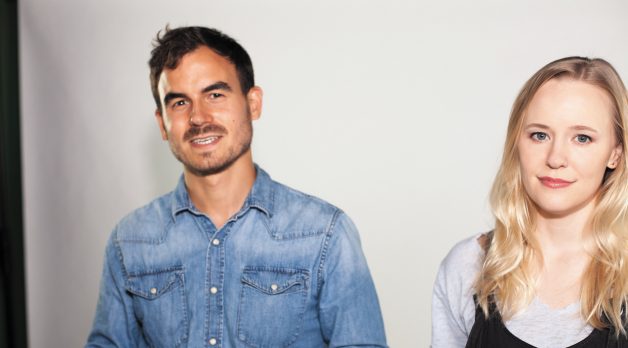 With Saint Frances, the debut independent feature that has been winning prizes all across the festival circuit — including the 2019 SXSW Narrative Feature Audience Award — director Alex Thompson says he and partner Kelly O’Sullivan knew the film they didn’t want to make. Writer, executive producer and star O’Sullivan says that’s “the Hollywood, super-cutesy ’woman learns tons of lessons from a precocious kid’ movie — a movie that feels too neat and saccharine and not very real.”

On paper, though, Saint Frances sounds like it could be just such a film. The film’s titular six-year-old (Ramona Edith-Williams) is indeed precocious, and in her first attempt at child care, O’Sullivan’s Bridget does undergo a transformative emotional journey. But that’s where the resemblances end.

As Saint Frances begins, thirtysomething Bridget — professionally stuck and in an unrewarding relationship — picks up a nannying job for a mixed-race lesbian couple. Her early dates with the mischievous Frances don’t go well, and when Bridget terminates an unplanned pregnancy, resulting complications leave her constantly fatigued — a medical condition that leads to a bonding moment later with Maya, one of Frances’s mothers (Charin Alvarez), who suffers from debilitating postpartum depression. By its emotional finale, Saint Frances is not a comedic two-hander but a sensitive ensemble dramedy that subtly tackles issues such as racism, reproductive rights and the emotional perils of an achievement-based culture.

And then there’s the blood. Blood — both menstrual and postsurgical — appears suddenly and startlingly throughout Saint Frances. “The movie is all about the ways that women are made to feel ashamed of their bodies, their choices and inherent parts of womanhood,” says O’Sullivan. “It’s annoyed me that [menstrual blood] has never made its way believably on screen — even in TV commercials for tampons, the liquid is blue! Knowing that we would be tackling this subject matter in a realistic and authentic way, the only way to do that is show it the way it is. Saint Frances is a feminist film, and I wanted to approach it so that these inherent parts of womanhood would take place on screen, not off.”

When it comes to tonal references for the film’s visual style, Thompson says he and DP Nate Hurtsellers “looked to odd places, watching films that we thought had the potential to be saccharine but succeeded by telling exciting stories that weren’t defined by their genre, like Butch Cassidy and the Sundance Kid and Coming Home.” The result is a loose, lovely, unadorned naturalism. “We could have lit scenes in the conventional way — a false source, gorgeous three-point Hollywood lighting — but we threw that out of the window.”

Previously, O’Sullivan studied theater at Northwestern; Thompson studied creative writing and film at DePauw undergrad, then directing at DePaul University. Both have numerous other credits — shorts and, for O’Sullivan, acting gigs in indie features like Henry Gamble’s Birthday Party. The real-life couple met when O’Sullivan hired Thompson to produce a sizzle reel for her. Funding for Saint Frances came via longstanding producer relationships as well as some of the senior citizen members of a movie club Thompson hosts in the back of a Chicago North Shore Panera.

Saint Frances is due for a 2020 theatrical release from Oscilloscope, and the couple, having signed to WME, are in the process of developing several scripts together. — SM/Photo by Raphael Nash