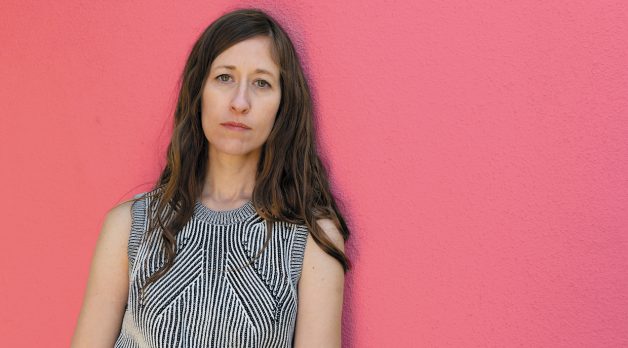 Alison O’Daniel had been making video art and performance videos — “I was taking a material and sculptural approach to video, thinking of video in relation to the body,” she says — when she took a class with video artist Bruce Yonemoto in the grad program at UC Irvine. Yonemoto assigned his students the task of following traditional filmmaking strategies, and, O’Daniel says, “I found a language I had already been speaking. Film was my first love, and I had been voraciously consuming and conceptually watching it for so long. So, basic filmmaking grammar came naturally.” Around that time, O’Daniel discovered another affinity — sound editing — after she got her first digital hearing aids. When she was three, O’Daniel was diagnosed with 60% binaural hearing loss, and switching from analog to digital hearing aids “rocked my world,” she says. “All of a sudden, I had heard all these sounds that I had never heard before, like the peeling of a banana.”

Sound — as subject matter, metaphor, and structuralist organizing principle — is at the heart of O’Daniel’s work, which mixes conceptual art practice, narrative storytelling, documentary and engagement with the deaf and hard of hearing communities. “The intersection between poetics and activism is where I’m most interested and inspired,” she says. Night Sky, a 2011 75-minute film O’Daniel made as her thesis, about a portal in the desert through which sound moves, features two actors (“one hearing and one deaf”), synesthetic interplay between sound and image, and would screen only in two-night bills. The first night would feature a live music score, the second a live American Sign Language soundtrack.

After school, the LA-based O’Daniel wanted to make “an ambitious film,” but financial reality got in the way. “A structuralist approach, a kind of slowly unfolding project” seemed a solution. And then O’Daniel read a news story about a rash of tuba thefts from LA high school marching bands. While local news coverage focused on the thieves, O’Daniel was more interested in the students. “I had this image in my mind of bands practicing with no instruments — students sitting with their eyes closed and keeping time. How does one reconcile with this loss of sound? That became really inspiring for me to try to figure out in a joyful manner.”

In progress since 2013, The Tuba Thieves comprises 50 or so scenes that, as they are finished, are being exhibited in art spaces and galleries like the Hammer Museum. It incorporates not only the tuba-thief tale but also recreations of two historical events — the 1952 premiere of John Cage’s 4’33” and the 1979 Bruce Conner–hosted punk show at San Francisco Deaf Club — as well as fictional storylines featuring deaf drummer and actor Nyke Prince. Collaborators include deaf sound artist Christine Sun Kim, who, in “Scene 55: The Plants are Protected,” provides a prerecorded score that O’Daniel responded to in the filming.

The Tuba Thieves received a Creative Capital Grant in 2019, and the project’s producer, Rachel Nederveld, is a Sundance Creative Producing Fellow. This new support is causing O’Daniel to “switch away from making The Tuba Thieves in bits and pieces,” she says. “I’m going to set a deadline, sometime in the next two years, and try to finish it all in one go.” — SM/Photo by Betsy Lin Seder