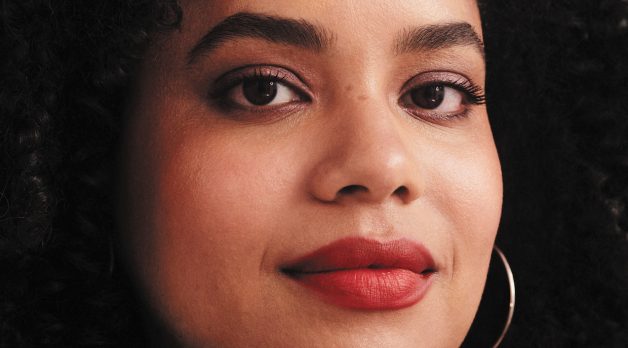 In Diana Peralta’s childhood, going to the movies was on par with going to church. Sunday tradition in the Peralta household consisted of mass, grabbing some New York bagels, then heading to the movies. Her devotion to cinema was cemented when her father insisted on a double feature of The Shining and the 2002 U.S. remake of The Ring: “Horror movies were such a foundational part of my love for film, though their influence isn’t necessarily present in my work.”

It’s true — the 29-year-old’s breakout feature, De Lo Mio, depicts only the metaphorical demons that come with the cultural dissonance experienced by children of the diaspora. The film follows two sisters, played stunningly by actors Sasha Merci and Darlene Demorizi, who return to the Dominican Republic after the death of their abuela to help their brother clean out her house, which is set for demolition. It was shot in the home of Peralta’s own abuela, whose passing in February 2018 prompted her to finally shoot the film she had been writing and daydreaming about for years. This wasn’t the only inspiration: Peralta and her sister, Michelle (who also coproduced the film), began photographing the house and the surrounding suburbs of Santiago during their visits years before shooting began.

The film was primarily financed by the very community it wished to resonate with. As a filmmaker with no viable reel or any previous shorts, the “applying for grants” route didn’t pan out — so Peralta decided to reach out to successful Latino patrons of the arts to secure funding. “I think I cheated the system in a way that worked for me,” she says.

Community was integral to the making of the film. Peralta leaned on her tight-knit group of friends from Johns Hopkins University, where she studied film in a small, budding program during undergrad, to secure a crew to work on location. “We all had a hustler mentality,” she says, which she attributes to the program’s scrappiness and their strict training in 16mm. “I didn’t have a digital education. Film is expensive, so we were used to getting the shots we needed quickly. I think I literally used every piece of B-roll that we shot [for De Lo Mio].”

While De Lo Mio demonstrates Peralta’s power as a filmmaker, she still has bills to pay and is currently working at an advertising agency. After a successful premiere as the closing night film of BAMcinemaFest, she is continuing to submit De Lo Mio to festivals — with an emphasis on those specializing in films about Latino identity — and envisioning her next project, which will examine the Dominican diaspora of NYC, once again with the help of su hermana.

“I’m gonna keep going on this route of playing with memory,” she says. “Being Dominican is a big part of my identity. I don’t want to limit myself to only writing about the Dominican experience, but at the same time there is just so much there.”— Natalia Keogan/Photo by Alex John Beck