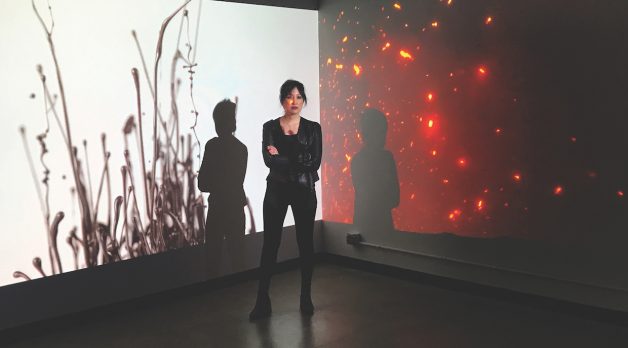 “My work tends to start with banal obsessions,” says Brooklyn-based filmmaker and artist Alison Nguyen. “I’ll get fixated on an idea, like, ‘Why are ice cream commercials shot like action sequences?’ Or, ‘Why are we suddenly seeing lens flare in food commercials?’ Then, I’ll go under the hood of the cinematic machine and look at what these formal tropes say about the larger semiotic production of meaning.”

The resulting pieces are striking and seductive works of found footage that play in single-channel versions at festivals like True/False and Ann Arbor and as large installations in galleries. Her recent Dessert Disaster juxtaposes dessert commercials with so-called disaster porn to examine our “insatiable appetite for destruction,” and you can’t plan a perfect day sometimes it just happens is a hypnotic, disquieting and, finally, epiphanic sequencing of TV commercial lens flares in which Nguyen explores the visual device’s journey from a “subversive sign” in underground cinema to a signifier of “authenticity, whiteness and spirituality” in product promos. Nguyen’s slyly intelligent and undeniably hypnotic work extends the critical approach of 1970s and ’80s video artists and experimental filmmakers like Gretchen Bender, Dara Birnbaum, Bruce Conner and Craig Baldwin into an eye-candy era in which image production is increasingly democratized. She says, “I’m interested in the digital image economy, with its promiscuity, unruliness, points of dematerialization and with the blur between author and audience and modes of production. A lot of my work is critical of conventional high-end cinema, with its emphasis on bureaucracy and the cult of the male genius.”

But there’s a personal impulse, too: “My father is a Vietnamese immigrant (he fled the war and came to the United States in 1966), and my mom is American, from a small coal mining town, Wilkes-Barre, Pennsylvania. The notion of the American Dream is something that my parents were very influenced by (in particular, my father), and a subject that I critically examine in media and reinterpret in my work.”

Nguyen is self-taught as a filmmaker. She studied literary arts at Brown and took classes in its storied Modern Culture and Media department. “I loved it, but there was this disconnect,” she says. “I didn’t want to just write about media [in order to critique it]–I needed to do it.” After studying graphic design at RISD, Nguyen moved to New York in the aughts and took day jobs as a photo assistant and then in independent feature art departments. In addition to much “research and hibernation,” Nguyen’s process “involves a lot of very obsessive looking, sorting and filing–sifting through commercials, news footage, YouTube, cartoons, reality shows. At the heart of my practice is this notion of the archive–I’m constantly questioning what that is and where I draw source material from.”

And the obsessions now fascinating Nguyen? “My next project in development is a video installation with which uses heterogeneous range of sources, including CG footage, advertisements, behind the scenes audio from film productions, and artist interviews, to critique male control of mediation of the female body in film and in visual art.” —SM/Photo: Cathleen Faubert