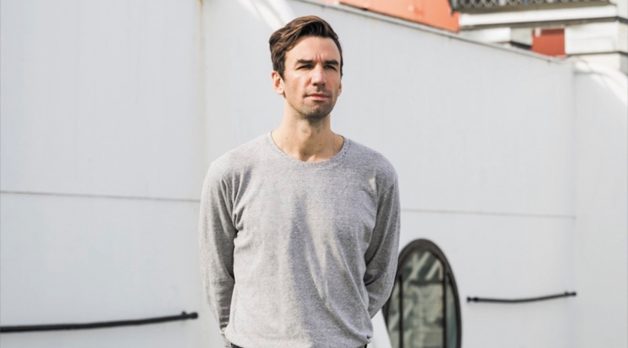 One of experimental cinema’s foremost wordsmiths, Andrew Norman Wilson has brought a unique sense of narrative to the world of video art, new media and installation. For more than a decade, the California-born artist has continually foregrounded storytelling in ways that suggest a future beyond the gallery. With In the Air Tonight, a 2021 Sundance shorts selection that reimagines an apocryphal origin story behind Phil Collins’s 1980s synth-pop hit, and his forthcoming first feature, Impersonator, about a Hollywood street performer who drifts into the fantasy life of their invented persona, Wilson seems set to enter a new stage in his career. “For a long time, I thought narrative cinema felt exhausted,” Wilson says. “Video art—especially 3D CGI—seemed like an open frontier. But I’ve realized a potential in what could be called a bodily narrative cinema that seems fruitful to explore.”

While earning his MFA at the School of the Art Institute of Chicago, Wilson made Workers Leaving the Googleplex (2011), a first-person essay about the filmmaker’s experience working as a subcontractor at Google in which he investigates the company’s class structure through a secret group of workers that scan materials for Google Book Search. In a stream of uninterrupted narration, Wilson established many of his primary interests: labor, technology, pop culture and the kind of corporate conspiracies that lend themselves to mythmaking in the absence of physical evidence. “Language seems to flood the work when I don’t have the resources to form a syntax out of materials,” he explains. “Words are cheaper than light kits and crew members.” Indeed, Wilson’s short videos seem to exist in a digital netherworld of ideas rather than characters, his original and appropriated imagery finding meaning in the literal and figurative parlance of our times.

Applying these ideas across a variety of contexts, including classrooms at UCLA, Cooper Union and Merz Akademie, Wilson has in recent years embraced his inner writer. The elaborately told In the Air Tonight and Z = |Z/Z•Z-1 mod 2|-1: Lavender Town Syndrome (2020) unlocked a nascent impulse in the filmmaker. “[I’ve gradually] become interested in constructing fictions in my work instead of reflecting or observing,” Wilson reveals. “First, it came as a realization that I could make essay videos like I used to, but instead of trying to perform amateur analysis I could just make things up.” In Lavender Town Syndrome, Wilson pairs a succession of aerial views of Chicago’s Marina Towers with a labyrinthine yarn that spins a story of young adults navigating the 2009 economic crises into an existential look at art world anxieties and the finer points of the Pokémon universe. In the Air Tonight, meanwhile, turns an urban legend about the iconic song into a lurid look behind the era’s neon-streaked facade through the musings of a mysterious interloper and extracted scenes from American Gigolo, 8 Million Ways to Die and The Player. (In a bid to further its conspiratorial tone, Wilson anonymously debuted the film in a Phil Collins subreddit thread.)

With the downtime afforded by the pandemic, Wilson has spent much of the past year developing his debut feature while watching one to two movies per day and building an online archive of his viewing. For the currently in development Impersonator, he’ll be working with a co-screenwriter for the first time, evidence of the more collaborative approach he’s taking for the project. “Narrative—a form that everyone has a relationship to—unfolds for the viewer as a complex process, and therefore serves as a container for hundreds of artworks: beats, revelations, characters, props, sets, etc.,” he says. “As a filmmaker, this challenge of generating all of these artworks in collaboration with others, then arranging them so that they sync up in time and space, feels extremely rewarding.” In other words, Wilson is ready to parlay his storytelling prowess into something more reciprocal and universal. As the narrator of Lavender Town Syndrome says, “Fiction is set to become the most potent force on earth.”— Jordan Cronk