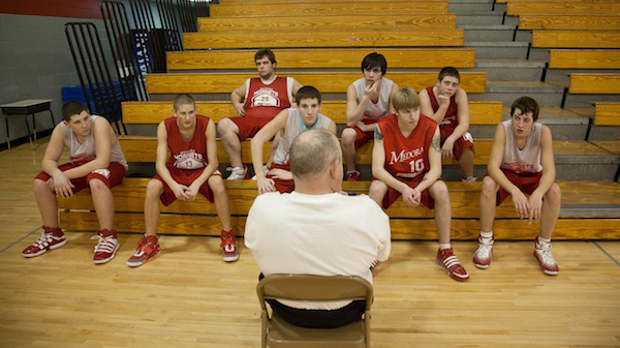 Andrew Cohn and Davy Rothbart have been friends since childhood, when they used to shoot hoops together in their hometown of Ann Arbor, Michigan. Since then, Rothbart has become a contributor to This American Life and an acclaimed writer of short fiction and personal essays, and also had his (Manti Te’o-esque) tale of a phone romance with someone who turned out to be a guy adapted into the 2009 film Easier with Practice. Rothbart and Cohn collaborated a few years ago on FOUND: People Find Stuff. Now It’s a Show, the off-Broadway show based on the magazine Rothbart started. Now they have teamed up again for Medora, a documentary about a small Indiana town in decline, seen through the prism its high school basketball team, which is riding a seemingly endless losing streak. In advance of Medora‘s world premiere screening tomorrow at SXSW, Cohn and Rothbart talked to Filmmaker about the making of their movie.

Filmmaker: How did you come to find out about the Medora Hornets and decide to make a film about them?

Rothbart: One night in 2009, I read an absorbing New York Times article by John Branch about the dwindling town of Medora, Indiana and its winless high school basketball team, the Medora Hornets. Andrew and I are lifelong friends who met on a basketball court in our hometown of Ann Arbor, Michigan, which is itself surrounded by the same kinds of decaying Rust Belt farm and factory towns as Medora. I shared the article with him and said, “We need to go down there.”

What would it be like, we wondered, to live in a state where basketball means everything and play for a team that never wins? And what is lost when our country’s small towns fade off the map?

The next day, we drove from Ann Arbor down to Medora to check out the town with our own eyes. We met the head coach and a bunch of the players, and spent a few hours wandering around town (it didn’t take long — the town is tiny.) We were struck by Medora’s eerie, beautiful silence and stillness, and by the kindness and openness of the people we met. It felt like we’d not only driven a couple hundred miles south from Ann Arbor but also gone back a couple of decades in time. At the end of the night, standing in a gentle snow on empty Main Street, we looked at each other and agreed: As passionate basketball fans, documentary film junkies, and proud Midwesterners, a movie about Medora was one we were born to make.

Filmmaker: Going in, how clear of an idea did you have about what the scope of the film would be? Did you shift, expand or tighten that focus?

Rothbart: It’s a tricky thing, because we wanted to make a film about both the town and the team. How do you find the right balance? Our hope was that if we found a few compelling players and coaches to focus on, people would get a sense of the challenges that the town is facing through the struggles (and triumphs) of a few individuals.

Cohn: The process of narrowing in on which of their stories to follow was an ever-evolving process. There were a few subjects we instantly knew had the potential to drive a film, but for many, it was not clear at the outset. Some players were more hesitant to open up than others, and it look longer to earn their trust. I’d say we began by following 7 – 8 players and coaches, but by halfway through our time in Medora we had mostly narrowed it down to 4 – 5. However, many secondary characters revealed themselves to be worthy of larger roles as we delved into the editing process. All of the kids have wonderful and amazing stories, but we wanted to include a diverse range of story threads, and particularly to include kids’ stories that related to the bigger theme of the film: the struggles of small-town America. It always seemed to us that an audience would get a deeper understanding of these issues if we simply provided a raw look into the lives our subjects.

Rothbart: Ultimately, the film is pretty kaleidoscopic — we focus on a few kids, but you meet (or at least get a lingering glimpse of) dozens of townspeople. We want an audience to come out of the film with the feeling that they’ve spent some real time in this town and understand what life is like there for the people of Medora.

Filmmaker:Was co-directing the film an easy process? What was the division of duties?

Cohn: Co-directing the film with Davy was a great experience. Not only are we great friends, but we already work together at Found Magazine, and have collaborated on a ton of other projects before. We’ve produced a play together, have written scripts together, toured the U.S. and Europe with Found — so we’ve had a working relationship for some time. Having that friendship at the core of our working relationship was essential. Like any collaboration, you’re not going to agree with each other 100% of the time. But any disagreements we had during the process were fairly minor, and most importantly, we were able to communicate with each other effectively — knowing that even a shouting match over a creative decision would never affect how much we loved and respected one another. All along, Davy and I wanted to make the same kind of movie, and our taste and sensibilities are so closely aligned. In that respect, it made things easy. We never had contrasting visions for the film. We also never had any clear division of duties during production. Often we would be off shooting separately, then talk about the film and our subjects at the end of the day and into the night. It was during those discussions that the film really began to take shape, defining who our main subjects would be, what their story lines were, and ultimately, what the movie was about.

Rothbart: Making a documentary film is such an unbelievably massive undertaking, I simply can’t imagine doing it on your own. You know how people sometimes say, “I wish there was two of me, so I could get done everything I need to get done?” Working with Andrew, it felt like there was two of me. We were also lucky to have a few other close friends and collaborators involved with the project, throughout our time in Medora and in the long editing phase since. Finishing a movie like this is a marathon, not a sprint — there’s just so much work to do. The good thing is that most of it is fun and completely invigorating.

Filmmaker: What was the biggest toughest aspect of tackling such a big project as first-time filmmakers? (I read you had 600 hours of footage!)

Rothbart: I think if we’d known how mammoth a project this was going to be from the beginning, we might have been too intimidated to even undertake it. But it’s a good thing we were a little naive. We just figured we’d head down with some cameras and some friends and see what happened. And in a way, the time we spent shooting in Medora — though it had its constant challenges — was the fun part. Then, once you’ve collected hundreds of hours of material, you’re like, “Shit, how do we put this together?”

Cohn: Editing a documentary film from 600 hours of footage isn’t an easy task. It’s easy to get lost. We tried to first focus on the best vérité scenes we had, and build around those. In many ways, our film is very panoramic in nature, and has a ton of different elements. There’s the story of the town, the basketball season, and of course the kids’ individual home lives. Figuring out how to weave all those different elements together was the biggest challenge from an editing perspective. We wanted to form a tapestry of the town, but keep the story cohesive.

Rothbart: We once talked about how with 600 hours of footage, we could have made a dozen different movies using none of the same shots! Ultimately, we’re happy with the version we assembled.

Filmmaker: After this, do you plan on working together again? You had great success on Kickstarter with this movie, so does that bolster your confidence for future projects?

Cohn: I think we will definitely work together again on future projects because we complement each other so well and our tastes are so similar. Being able to go through and share this experience with someone else is such a gift. It makes things a lot easier (and more fun) being able to go through this process with a friend. Having someone that you respect to bounce ideas off and get constant feedback from is such an invaluable tool. I trust Davy’s judgement and I know he feels the same way. Because we’ve known each other for so long, we both approach things from very similar perspectives. We grew up together, and that shared experience informs everything we do. At the end of the day, we wanted to make a movie that we both like. Luckily, we like the same kind of films. I can’t imagine having to direct this film by myself.

As far as our Kickstarter campaign goes, the funds people chipped in provided not only a huge, necessary financial boost to the film, but a big morale boost as well. It gave us some confirmation that this project was special, and would resonate with people. Having a network of support was a huge step in our process. We always felt that this film could be great, but knowing that others believed it, too, was invaluable.