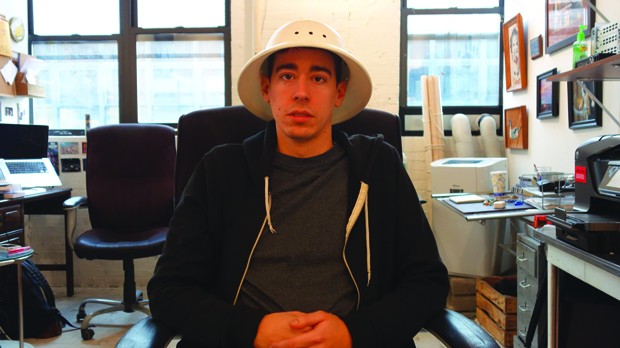 Bernardo Britto conceived his most recent animated short, the Sundance Short Film Jury Prize-winning Yearbook, after grappling with the ultimately insignificant scale of his previous work. “It didn’t mean anything, and people would just forget about it,” realized Britto. “How do you deal with making things people won’t remember 100, 200, 300 years from now?”

If you’re Britto, you make a devastatingly emotional, socio-politically steeped love story of sorts about a man who has been tasked with cataloguing our world history in the 17 years before an alien missile detonates Earth. It’s a highly intelligent allegory, characteristic of Britto’s style, which he says favors story over technique: “I think a lot of people get into animation because they’re obsessed with the craft, but I operate from a standpoint of, ‘I have a great script, it would work well as an animation.’” Though he recalls creating vague animations in middle school with the obsolete Microsoft Paint, the Brazilian-born Britto enrolled at New York University’s Tisch in 2007 for film production. “It wasn’t until I took a course with John Canemaker,” he says, “that I got into animation, I think maybe because of how supportive everyone was. And it wasn’t as competitive as the film floor.”

After graduation, Britto was introduced to the Miami-based Borscht Corporation through his producer, Brett Potter. Since Britto was reared in nearby Weston and looking to make a film reflecting on his home given his parents’ imminent move, Potter suggested he send Borscht head Lucas Leyva a script. Leyva bit and commissioned Places Where We Lived (SXSW 2013), an animation that employs live-action and archival footage of industrial demolition to relay the history of Britto’s home and sale with his signature brand of subversive paranoia.

As much as he enjoys the “direct path that animation affords from [his] brain to final product,” Britto sometimes feels he’s missing out on the collaborations inherent to live action. That fear should be assuaged, as this October he will head to Argentina to shoot a live-action feature. Starring Camille Rutherford as a “25-year-old French Edward Snowden-type” who takes refuge in Argentina after leaking government secrets, the film will be shot from the perspective of a documentary crew she’s hired to trail her while awaiting the fallout. Britto describes it as An Oversimplification of Her Beauty meets Blowout. — Sarah Salovaara