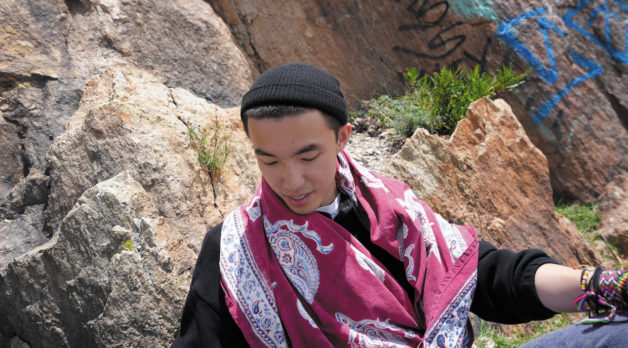 Chenliang Zhu grew up in Beijing and was “very good at mathematics.” Because, he says, “education in China encourages you to do what you’re good at, not what you really love,” he ended up studying statistics—completing his undergraduate degree in China, then an MFA at Johns Hopkins—“without knowing what I really wanted to do. After I graduated, I was in a depressed state of mind because I wanted to pursue filmmaking but didn’t have the courage. After finishing my first master’s degree, I took a trip to Amsterdam with my best friends and took mushrooms for the first time. We ended up in a small hotel, and I watched Requiem for a Dream on a very small computer. I owe some credit to mushrooms for helping me to make up my mind to pursue filmmaking.” He spent ages 24 to 26 building a portfolio, then applied to CalArts’s graduate program.

Zhu’s debut feature, Parkland of Decay and Fantasy, was made as his second-year film and premiered at this year’s CPH: DOX. The continuously shape-shifting hybrid nonfiction film begins with a man recalling the police-forced end of an artists’ occupation. This rigorously locked-off oral testimony gives way to a faux step-printed, Solaris-esque shot of a car driving through a tunnel as a social media influencer argues with his girlfriend on the way to the abandoned amusement park the artists squatted in. An iPhone screen with subtitles on either side takes up the frame’s center, first showing map directions to the site, then switching to an overhead drone shot of the pair approaching. Once there, the POV switches again, this time to Instagram Live as the two roam and get separated. The mood turns spooky and sinister, suggesting the intriguing prospect of “found footage horror films” becoming reality.

This heterogeneity of modes continues through Parkland, which Zhu both shot and edited over an organic six-month process. “I feel like the process is like a botanic garden,” he says. “Each seed is a cinematic language, and to cater to each plant you need time, patience and care. You have to follow the rhythms of nature; you can’t force it to grow. But, to design a whole garden, I have to design the whole layout of the garden. The camera is my pen. I go there, I capture documentary footage, I go back and think about it, then I go back and shoot more.”

Parkland follows a series of shorts that he defines as “magical realism,” while identifying the feature as “realist magicalism.” He settled on the park as a shooting site after a two-month trip across China, visiting a number of similar abandoned locations before landing back at one of the very first he visited and renting a bungalow there. “For the first 12 years, I grew up in a gated community that studied rockets,” Zhu recalls. “That landscape really lingered in my mind. Parkland is in a very isolated community, and there’s only one way to the island: through a tunnel. That’s very similar to the community where I grew up, where there’s only one very narrow lane in.”

Zhu’s currently shooting a new feature in the Mexican mountain town of Real de Catorce—which, like Parkland’s site, can also only be approached by one path. “My shaman friend told me a story: Long long long ago, a meteorite showered the mountains of Real de Catorce, leaving a hole on many stones there, and the Indigenous kids used to play with them like cameras,” he says. “People there often joke about the origin of films. Before the so-called first camera, there might have been a million films made already in the minds of generations of kids on this mountain. This new film is about a 12-year-old Indigenous boy falling in love with cinema. This time, there will be a main character—the boy—and his relationship with his single father, with whom I’m currently living and writing a script.”—VR/photo by Mei Li