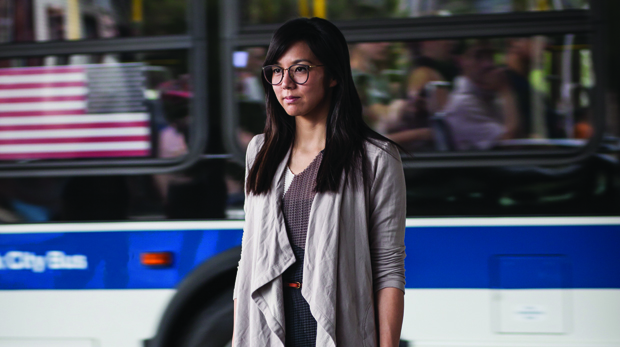 Every night in Silicon Valley, a bus on the 22 line serves as a de facto homeless shelter. Most onboard just want to sleep, but fractiousness is never far away. Elizabeth Lo’s short film Hotel 22 unblinkingly records frayed nerves among those nodding off, a straight-up racist exchange and the abrupt end of the ride, when passengers are forced out into the night. The film never loses its cool, maintaining a rigorously composed, immersively embedded gaze throughout.

Born in Hong Kong, Lo moved to the United States when she attended New York University’s film school from 2006 to 2010, where she discovered an affinity for documentary filmmaking. Going to screenings on a regular basis helped her develop a voice that draws upon controlled aesthetics in both fiction and nonfiction filmmaking, with Russian documentarian Viktor Kossakovsky, Abbas Kiarostami and Kelly Reichardt among the diverse reference points she cites. After graduating, Lo spent a few years working in television documentary before attending Stanford University’s two-year documentary program, which requires students to make one film a semester; Hotel 22 was the third.

“My only goal was to make a film in a contained space, and I felt that public transportation is very revealing,” Lo explains. “When you see people get on and off the subway in New York, the demographics are very revealing, but it’s not so obvious in the Bay Area.” A friend told her about the 22 line and its de facto shelter status, and she started riding after class with a 5D. “I was interested in spaces where there would be a collision of different classes of people,” Lo says, wanting to immerse viewers without “journalistic verbiage.” The controlled gaze also matches the space: “When you’re dreaming, you’re not necessarily tethered to the reality of your existence, which takes away from the harshness. I think that’s where the aesthetic of the film came from. I hoped that silence would encourage viewers to imagine what the passengers might be thinking and feeling and, in doing that, engage in the act of empathy.”

Lo shot 30 hours over six days; the resulting eight-minute short was accepted by Sundance and subsequently selected to be a New York Times Op-Doc. Locally, it’s been screened by the Silicon Valley Community Foundation, who’ve commissioned Lo to make a documentary about the displacement of a mobile home park in Palo Alto, as well as by the San Jose Department of Transportation, with a mix of transit officials and the homeless speaking afterwards. Lo notes that the film’s success has “allowed other people who work in social justice to do concrete things with it,” a happy effect she didn’t anticipate: “I say I’m not an activist, but growing up in Hong Kong — a very racially and economically stratified place in very obvious ways — I was always super-sensitized to the inequality that’s there. I’ve always aligned myself with the powerless.” She’s currently expanding Hotel 22 into a tonally very different feature that will premiere next year — a more difficult film that will include more of her interactions with her subjects from behind the camera and address “murkier territory, ethically: How do you represent mental illness, and am I allowed to do that?” — Vadim Rizov/Photo by Richard Koek