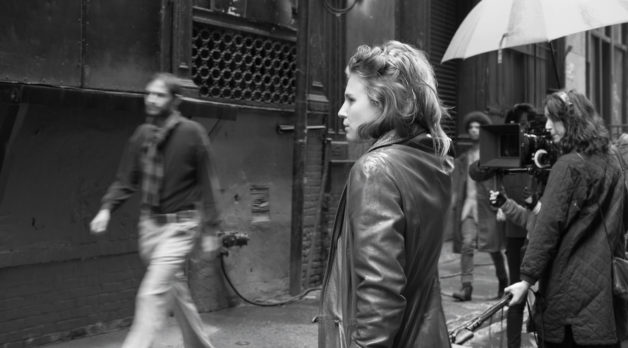 In 2010, after living in Boston and San Francisco, Princeton, New Jersey-born Elizabeth Nichols moved to New York’s Lower East Side and immediately felt a sense of liberation. “There was this feeling of being anonymous while also being proximate to so many different human beings,” she says. “I could just watch people all day and hide behind my camera.” Two years later, a notorious New York landlord bought her building and tried to evict her. “It was a poor attempt,” she laughs, “but a very threatening experience.” With her camera, Nichols began attending the meetings of a group of activists, many of whom had lived in the neighborhood for decades, fighting real estate gentrification efforts and, by extension, the progressive loss of the artist neighborhood’s very identity. Among them was the tall, imposing Philly Abe, a visual artist, musician and performer with spiky red hair she recognized as one of her building neighbors. “She was always someone who intimidated me,” Nichols admits, and at the meetings, “she was definitely skeptical of me. I think she thought I was making a boring movie and didn’t want to be part of it.” But the more she learned about Abe, the more Nichols found her compelling as a subject. “Once I told her that I wanted to make a film about her, she was like, ‘I think that’s a damn good idea.’”

Flying Lessons, eight years in the making, is Nichols’s documentary, and begins with the filmmaker packing up Abe’s apartment after the artist’s death from pancreatic cancer. “You had asked me to do three things,” the filmmaker says in voiceover. “Show your art, tell your story and fight for your apartment.” Nichols does that and much more over the next 90 minutes, which collide elegiacally across decades, blending archival footage of a younger Abe performing at New York’s Pyramid Club with moving vérité footage of her life as an older woman navigating housing insecurity in a rapidly changing city. There’s another strand comprised of the underground cinema that Abe acted in—clips from films by Todd Verow, George Kuchar and Jack Waters, among others, that are missives from an unrulier artistic era as well as a testament to the ways in which fights against landlords have been animating forces across generations of rebellious artists.

“Philly was somebody who saw herself as a minor cultural icon, who was of cultural significance within a certain world within that neighborhood at a certain time,” says Nichols. “One of the things I’m exploring is, what happens to a woman whose identity is tied to that sense of cultural significance when the culture around you is changing and the neighborhood is experiencing what I saw as a cultural crisis? What happens to her own experience of her identity?”

“Philly had always told me she was not a linear person, so it didn’t feel right to impose a linear structure on her experience,” Nichols continues. “One of the ways we thought about the editing process was as a process of archaeology—digging into the emotional history of a woman.” When the two met, and before she was diagnosed, Abe, whose demeanor in the film ranges from prickly to heartbreakingly tender, told Nichols that “she was going through a spiritual and emotional transformation—that there was something happening in her understanding of her own identity. And I wanted to get inside of that experience even as she kept telling me that that was impossible.”

Nichols, who also is a producer and screenwriter on the film, is currently in Flying Lessons’s final stages of post with editor and screenwriter Luiza Pârvu, screenwriter Chris Boeckmann and producer Alik Barsoumian and plans to submit to 2023 festivals. She also hopes to screen the film and engage with the downtown New York artist community that spawned it—a goal in tune with Nichols’s daily professional work in Tanzania, where she now lives and teaches filmmaking at Orkeeswa School. “The process I go through with my filmmaking students is very community oriented,” she says. “We make films for the community, and when we share those films, we sit with the community and have a dialogue. I wonder what that would look like in the context of the independent film world? What does it mean to bring storytelling back to a community scale, a human scale, where we can be bodies in a space and process a story together? That’s something that motivates me.”—SM/photo by Cindy Beams