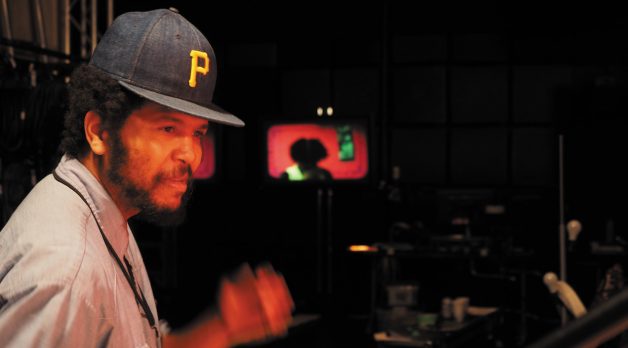 In Ephraim Asili’s first feature, The Inheritance, which premiered at Toronto this year, Julian (Eric Lockley) moves into his late grandmother’s house and initiates an experiment in Black collective living. The influence of Jean-Luc Godard’s La Chinoise, evident in the film’s poster onscreen and the house’s boldly painted walls, is mixed with Asili’s personal memories of Philadelphia’s MOVE members (the Philadelphia native first met them as a teenager) and living in a Black Marxist collective. Shot, per Asili’s usual practice, on 16mm, The Inheritance marks a shift from overtly experimental to essentially narrative work. It’s literally colorful, unexpectedly funny in depicting the conflicts that can emerge from collective living and sincerely invested in how aspirant revolutionaries can learn from past struggles. MOVE is, infamously, the Black liberation group that had a bomb dropped on its house by the city of Philadelphia in 1985, and the members appear in the film. “MOVE isn’t a curiosity of mine,” Asili says. “Sure, they were on the bullhorn being very loud, but why were they doing that? Nine of their people were imprisoned for a crime they didn’t commit. Since when is dropping a bomb justice to people who were being rude? And the MOVE members that people were reacting to in 1983 were not necessarily the same MOVE people I met in 1999. That love and warmth, that’s what I wanted to give attention to.”

An experimental filmmaker whose teachers at Bard included Peggy Ahwesh and Jeanne Liotta, Asili completed five shorts from 2011 to 2017 as part of the “Diaspora Cycle.” The globetrotting works incorporate narrative, travelogue and (in 2017’s Fluid Frontiers) direct-to-camera reading of revolutionary Black paperbacks from the 1970s and ’80s—the latter are similarly important to The Inheritance. Fluid Frontiers anticipates The Inheritance in the Godardian framing of the couple at its loose narrative center, seen against walls papered with Obama/Biden campaign ephemera. Actor Julian Rozzell Jr., who appeared in Asili’s first two shorts, returned for The Inheritance. (The director says Rozzell enjoyed working on experimental films: “I love doing your movies! All I have to do is walk around.”)

Asili received a grant from the Experimental Media and Performing Arts Center (EMPAC) at Troy, New York’s Rensselaer Polytechnic Institute—to write the film in Philadelphia, then workshop it for two weeks at their venue, including a climactic performance of one act of the script. Meanwhile, Asili explains, “I was in contact with many of the groups we think of as supporting young makers of color and got no help from anyone. I don’t know that there’s always this world of people looking for new talent of color and wanting to share that work if it doesn’t subscribe to certain formal requirements.” Abandoning his original plan of shooting on location in Philadelphia, Asili accepted EMPAC’s offer of a grant to shoot in their space on a constructed house set. The film, though, bears an additional financing credit for Asili. “Anything that happened outside of EMPAC, I had to pay for myself, down to the equipment,” he says. “I bought that equipment so I can continue to use it. I wanted to put that additional funding credit in there so that the discussion around how films get made includes the tremendous amount of sacrifice that goes with it.” Asili’s future film projects include a short film assembled from autobiographical footage shot for The Inheritance in the south, none of which made it into the final feature, as well as plans to write a second feature.—VR/photo by Mick Bello