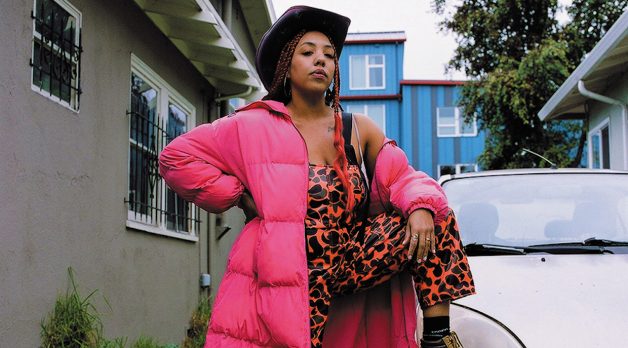 Jazmin Jones was eight years old and living in the Bay Area when she first encountered Mavis Beacon, a fictional figure created by the cofounder of MySpace to represent the popular Mavis Beacon Teaches Typing software game. “I’m a pupil of Mavis Beacon’s,” Jones says. “I owe this woman so much. When I was learning the game, they have these little Black hands that mimic typing. It was so amazing to see a digitized version of a body like mine on screen at such a foundational age.” But, as Jones grew older she has realized Beacon is a bit of “a problematic fave”: “As I have continued to work in the digital arts and to think about self-representation as a Black woman, I have needed to retrace my steps and think, ’Why was Mavis Beacon Black? What was that racialized and gendered casting choice about?’”

Those questions swirl around Jones’s wildly inventive first feature, the hybrid doc Seeking Mavis Beacon, now in production. With producer Guetty Felin and associate producer Olivia McKayla Ross, Jones is making a film that, according to its logline, asks “critical questions regarding anthropomorphization and the consumption of marginalized bodies in the tech industry, while reimagining the legacy of a missing historical figure.”

A Haitian woman, Renée L’Espérance, was the original Mavis Beacon, to whom the developers reportedly paid just $500 plus a free suit. Jones is in touch with the software’s white developers, saying to them, “I do have problems with the idea of a Black woman being in a perpetual role of servitude, but, also, y’all made something brilliant that touched me as a young girl.” She continues, “They weren’t necessarily thinking about representation when they put her on the game. It was marketing—they knew it would get folks to pick it up. But it’s a different public conversation now in 2021.”

Describing the film, Jones gives credit to Cheryl Dunye for inspiring its form with her 1996 picture, The Watermelon Woman. But whereas Dunye’s film searched for a fictional character, Seeking Mavis Beacon ultimately hopes to find L’Espérance herself and reconstruct her history. As Jones describes it, the film starts in “a narrative space, exploring the myth of Mavis Beacon. If Mavis Beacon was real, what would be her backstory?” Jones envisions scenes with well-known Black sports, political and entertainment figures testifying to Beacon’s importance. The film goes on to explore the Mandela effect around Beacon—people remember her appearing on talk shows or speaking at their schools—before its form is broken entirely. Jones and Ross become onscreen “e-girl investigators in a neo-noir landscape of Oakland,” searching for L’Espérance while also grappling with the ethical issues arising from looking for a Black woman, a Haitian immigrant, who may not want to be found. Asks Jones, “When does this become invasive or exploitative? When are we just replicating the same harmful patterns in terms of taking her image without her permission that maybe the developers are guilty of? All of that is something that we’re definitely unpacking on camera.”

Jones’s filmmaking origin story began when, growing up in Fremont, CA, she walked into the Bay Area Video Coalition (BAVC)’s after-school program at 15. She was involved with the organization for eight years and “was their poster child—literally, if you walk in, there’s a poster of my face right there.” Jones says their ethos of “making personal documentaries to create positive change is embedded in my head.” She studied film at the New School and worked various “preditor” (producer/editor) jobs on commercials and music videos. Her first job out of college was as a one-woman video department for Marie Claire, where she was “part of calling out toxic work behaviors at [now former] parent company Hearst, which resulted in the vice president getting fired. After that, I thought, ’I’ll never get a job as a freelancer!’” Citing Kirsten Johnson, who is an advisor to the project, as a professional inspiration, Jones still works as a cinematographer and is currently shooting Fighting for the Light, a hybrid film directed by her partner, Yeelen Cohen, in collaboration with Souleymane Cissé.

Jones also formed the BUFU (By Us For Us) collective with filmmakers Tsige Tafesse, Katherine Tom and Suhyun Choi and makes video art that streams online, including on a Black-themed Instagram ASMR account. “If any films are politically thorough,” Jones says, “it is because I have worked in this collective format [with BUFU]. I was coming from a very hierarchal way of thinking about how movies get made. In working with my collective, everything was broken apart. Now, it’s more like, let’s use this documentary as a tool to initiate conversation. Let’s think of it as a healing tool.”

After receiving a True/False PRISM fellowship in 2020 and support from Cinereach and Field of Vision, Seeking Mavis Beacon has been on a fast track. Guerilla funding techniques—like posting fake news stories on social media about the project’s buzz, including one ostensibly from Filmmaker—got the team meetings at top indie distributors, and production/financing news is forthcoming. And, if you’ve seen Mavis Beacon, the filmmakers have a hotline to call: 516-531-7337.— SM