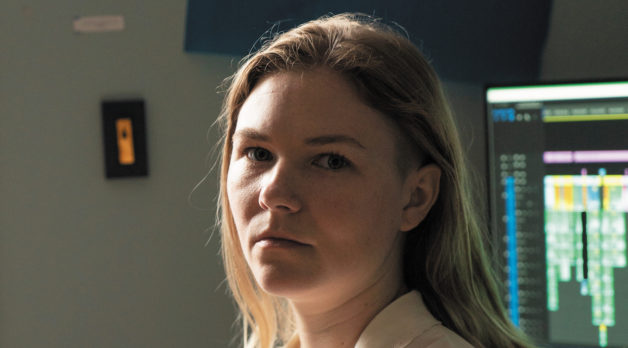 Growing up in Houston, Lucy Kerr remembers that “disciplinary systems were a big part” of her childhood. These included attending “a very difficult private school academically. Ballet was a part of that: I enjoyed the discipline and intensity of how it pushed my body, even at a young age, and having that form of expression, but how gendered it is, and how much suffering there is in the dancers, wore on me. That’s a big part of my work now: how our bodies are disciplined and conditioned on a daily basis.”

That work includes her first feature, Family Portrait, which was selected as a FIDLab project in 2022, shot in 10 days this summer and is aiming for a festival launch in 2023. Kerr’s path to the project, and film in general, sprung from her dance background, which led her to UT-Austin to study philosophy and dance. A few serious injuries there led her “to think more critically” about how dancers’ bodies are treated, as well as to work with a dance troupe of mixed-ability performers. Meanwhile, her philosophy thesis, focused on disability studies and performance, won a $10,000 prize that gave her both the monetary basis and confidence to move to New York City to pursue choreography. There, she fell in love with experimental film after becoming a regular attendee at Anthology Film Archives and Light Industry. Along with the work of Leslie Thornton, she cites a viewing at BAM of Eric Baudelaire’s essay film The Anabasis of May and Fusako Shigenobu, Masao Adachi, and 27 Years without Images as formative. “The dance world is still so focused on virtuosity and athleticism,” Kerr says. “Film and art allowed me to explore more research-based and conceptual projects like I saw in Baudelaire’s film.” Later, Claire Denis’s Beau Travail helped her discover that “performance, and the body, can have this narrative power and serve this role within a narrative film.”

At CalArts, she continued to study film and art, though she now identifies more as a filmmaker. The first of her two shorts to premiere at FIDMarseille, 2021’s Crashing Waves, begins with Kerr speaking over black, telling the story of a stunt coordinator on a set for a rehearsal that requires her to sit in a car as it drops into water; a little less than halfway through, the title image appears onscreen. The granular particulars of the experience—the performers are required to buy their own seatbelts, and the narrator realizes in hindsight that “production should have provided those, but that’s a whole other story”—form a disturbing portrait of an unsafe stunt. The story is taken from the experience of queer stunt coordinator Jess Harbeck; Kerr chose to record herself reciting the anecdote in part because Harbeck’s delivery was so fast, but also because of the conceptual aptness of doubling her subject’s experience just as Harbeck was doubling for an actor. Site of Passage (2022) presents a group of adolescent girls playing four games with ritualistic intensity, beginning with “light as a feather, stiff as a board” (as featured in The Craft) and climaxing with the four intertwining their limbs and pushing themselves up from the floor as one body. As with her 2019 performance piece Four Girl Trick, the last shot was inspired by the internet challenge of the same name. “They come together to become one, creating a sense of solidarity and interdependency,” she observes. “In the culture I grew up in, you’re encouraged to define yourself and make yourself stand out—this American mentality about being an individual and independent. So, part of my practice in performance is creating spaces of interdependency and making that visible.”

That cultural background comes to the forefront in Family Portrait, shot in and around Kerr’s grandparents’ home in Kerrville, Texas. (“The South is overrepresented, but always in the same way,” Kerr says.) The feature stars Deragh Campbell as Katy, who returns to her Texas family home to take a traditional Christmas card photo. That family, Kerr notes, is from oil money, with lots of old Pennzoil artifacts around the house, but they’re not “stereotypically conservative: They’re not bigots, but there’s this sense that they’re disconnected from the world, with an inability to talk about meaningful subjects. They keep spiraling into these idle conversations about nothing.” Halfway through, when the mother disappears, Katy goes to look for her and enters the forest across the way in a bifurcation inspired by Tropical Malady. For her next feature, Kerr is contemplating another on southern life, focusing on a debutante ball “as a very occult kind of ritual.”—VR/photo by Karlis Bergs