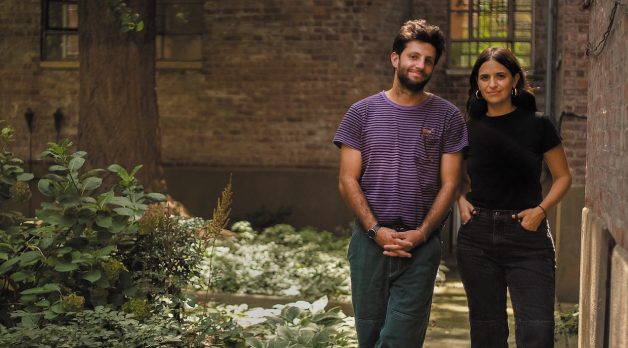 “It was the first day of shooting,” says writer, director and actor Michelle Uranowitz, “and our sound person came up to us and said, ’I just want you to know that the actors are talking over each other.’ ’Unfortunately,’” she remembers replying, “’that’s not going to change.’”

Overlapping dialogue in all of its many cacophonous, funny and intense variations is a hallmark of the short films New York–based Uranowitz and creative partner Daniel Jaffe have made together. “I grew up within a neurotic Jewish family where everyone was constantly talking over each other,” Uranowitz explains. “I think my ears don’t understand what clean dialogue even sounds like.” Adds Jaffe, “It’s a challenge in the edit room, but we love to lean into it and let the chaos drive it all.”

In the first of the two shorts the pair screened at 2021 festivals, the blackly comic The Ultimate (By Lou Fescano), directed by Jaffe and scripted by Uranowitz, the overlapping dialogue erupts as family and friends grieve the titular Lou, a high school pal of filmmaker Nicole (Uranowitz). Returning to her New Jersey home for his funeral, Nicole learns that among his possessions is a clandestinely written, Goodfellas-like mob drama screenplay, and his friends think she, as a final tribute to him, should direct it. The Slamdance-premiering short crosscuts between Nicole’s arguments with her brother and mother, her reunion with her Jersey crew of girlfriends, the funeral and then scenes from the film itself, which play out like some ’90s Vestron knockoff. The short is hilariously absurd but also, in its own way, touching in its meditation on the ways we seek to find meaning in a life that’s lost.

The duo’s next work, Sales Per Hour, which Uranowitz wrote and they directed together, screened at SXSW and uses a barrage of concurrent dialogue in an even more effective way. The dizzying chatter of a floor manager, his sales team and assorted customers at a high-end clothing boutique produces a moral blur and explicates what’s known as “the bystander effect.” During one frenzied afternoon, Uranowitz’s salesperson suspects a clearly intoxicated young woman may have been sexually assaulted in a dressing room. What’s masterful about the film is that amid the dialogue onslaught, quick cuts and darting camerawork, it’s just as easy for the viewer as the salesperson to initially miss the clues to the assault. “It’s based on an experience of mine when I was working retail,” Uranowitz explains. “A lot of the day [in the film] was like the way it happened—things were happening so quickly that you almost find yourselves in the middle of a crime when it’s too late.”

After four years at that retail job, Uranowitz quit a week after this incident. With a background in dance, she began teaching movement,
which becomes the backdrop to the first Jaffe and Uranowitz short, Goodbye, Brooklyn. Uranowitz wrote and starred, Jaffe directed; the short is a riff on the “Goodbye to All That” genre, with Uranowitz’s plucky movement teacher bidding farewell to the shop owners of her Brooklyn neighborhood, who are nonplussed about her departure.

“The films are all pretty different, and intentionally so,” says Jaffe. “We kind of fell into making these films together, realizing that we share a really nice ability to agree on the difficult artistic things 99 percent of the time, which is rare.” Says Uranowitz, “I think Daniel and I similarly gravitate towards endings without resolutions. There’s always the way you want the film to end, and then there’s the way reality actually works, you know? I think we lean into more open-ended questions at the end of the films.”

Uranowitz now is at work writing a feature version of Sales Per Hour, which she describes as a kind of revenge picture living in “a Lynne Ramsay thriller world,” while Jaffe is adapting The Ultimate into, perhaps, a series. Both are tired of self-financing and crowdfunding shorts, and Uranowitz just left her job teaching movement and physical training to actors at NYU to focus full-time on filmmaking. She adds, “If you have any secrets on how to do that, please let us know.”— SM