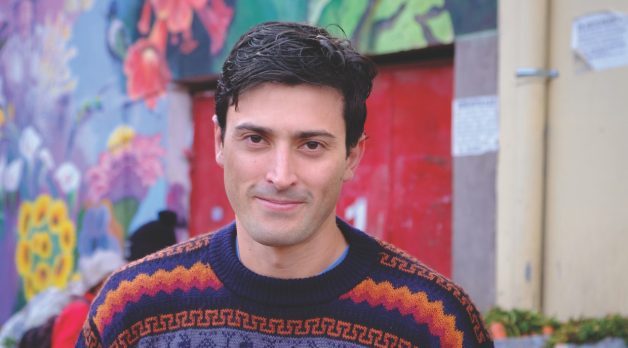 Growing up in Bogotá, Colombia, Sebastián Pinzón Silva didn’t know about the palenques—communities founded in 16th-century Colombia by Africans who had escaped slavery in the United States, of which only the village of San Basilio de Palenque survives. “I wasn’t taught about this in school, but it’s such an important part of Colombian history,” Silva says. “I didn’t want to do a traditional narration of the history of the place. There’s been a lot of ethnographic work done there, but I’m not an ethnographer.”

Palenque, Silva’s thesis film for the two-year documentary media program at Northwestern University, premiered at Locarno last year. It only provides historical context in its final title cards. “I wanted to hold on to that information until the very end so you don’t expect something before you see it,” Silva says. Inspired by lumbalú funeral rites, which Silva describes as a “mix of Western African and Western traditions in which music is performed for the deceased for nine days,” Palenque’s free-flowing village portrait ties together numerous musical sequences and long walking shots that are reminiscent of Lisandro Alonso–inflected Latin American cinema but still find their own distinct rhythm and visual strategies. Silva cites a shot following a village woman selling candy on the street as the short’s “essence.” “We set out to accompany someone in their walk and let things unfold in front of us, dancing with reality as opposed to constraining it to a predetermined plan,” he says of the shot, for which he operated the camera. “It’s a mixture of good luck and reacting to things as they unfold and moving accordingly.”

When he left Colombia at 18, Silva intended to pursue photojournalism at the Savannah College of Art and Design (SCAD) in Georgia, but “it’s an art school, so you only choose your major after learning drawing and color in the first year. That shaped the way I think about composition. I took a film class and found in documentary film a perfect extension of what I wanted to do with photography.” After finishing at SCAD, Silva moved to New York City for five years, working for commercial/music video director Bob Giraldi (Michael Jackson’s “Beat It,” Lionel Richie’s “Hello”) before continuing his studies at Northwestern. He credits Harvard Sensory Ethnography Lab–trained filmmaker and professor J.P. Sniadecki (The Iron Ministry) in particular for shaping his approach to documentary filmmaking. “The reason I’m attracted to docs is I’m not one of those people who can work from scratch,” Silva speculates. “It’s kind of a passive approach, but it provides a lot when you’re open to what life can offer you.”

Now based in Chicago, where he works as a freelance cinematographer and editor, Silva plans for his next film to chronicle La Bonga, a ghost town near Palenque that’s been consumed by the forest: “We want to do a film very much inspired by [Werner Herzog’s] Fitzcarraldo, starting in a journey back to La Bonga. When we get there, we’re going to recreate the celebration of the patron saint of La Bonga. We’re going to bring a huge sound system; just getting it out there represents Fitzcarraldo’s boat.” — VR