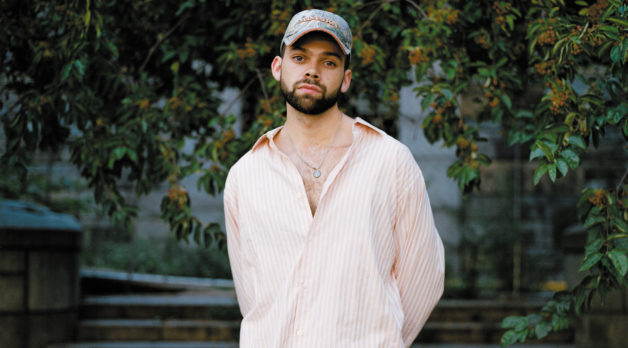 Tij D’oyen’s Lollygag—which received a Grand Jury Honorable Mention at its Outfest premiere this year—is a blackly comic reminiscence of a formative teen summer. In flatly enunciated Greek voiceover, a girl (Gaby Slape) recalls the season she spent spying from her bedroom window on the boy next door (Isaac Powell). Already aware that she wasn’t attracted to men, the anonymous narrator nonetheless found herself staring at her neighbor and his seemingly endless string of visiting lovers as he “lounged and drank and swam and smoked.” “Sometimes the way he acted gave me a funny feeling,” she recalls. “The feeling that he knew that I was watching.” Shot in disciplined Academy ratio compositions by DP Matthew Roveto, Lollygag unfolds with the nasty precision of a macabre short story in the Roald Dahl mold. Alex Sarrigeorgiou’s foreign language narration, at odds with the clearly American setting, creates the sense of a text being adapted and a distance that heightens Lollygag’s satisfyingly sinister tone.

D’oyen was born on Long Island but raised in rural North Carolina. His first exposure to non-mainstream filmmaking came with a high school viewing of Dogtooth; more recently, D’oyen describes his “holy trinity” as Apichatpong Weerasethakul, Lucrecia Martel and Todd Haynes. D’oyen notes in particular his appreciation for the Thai director’s sense of the spooky: “I don’t think I’ll ever make a flat-out horror film, but I like films that are horror-adjacent, flirting with this sinister side of things.” He attended University of North Carolina School of the Arts—for acting, not directing, although D’oyen was an enthusiastic amateur teenage filmmaker, shooting “horror movies with my friends in the woods. When I went to school, I stopped doing that.” His friend Cameron Morton was, he says, “the one who trailblazed this drama school-to-filmmaking pipeline, at least for me. Right after school, she was like, ‘Fuck acting. I want to make movies.’ After I graduated I started helping friends on sets. Having not attended film school, I have a self-taught, guerrilla approach to filmmaking.”

In his earlier shorts, like 2019’s #Ghosted and the early quarantine-period faux-video diary The Passion & Ecstacy of St. Brigitta, D’oyen acted on-screen in iterations of a drag alter-ego. Of the latter short, he says that he just “needed to make something”; he shot the film by himself in two nights on a DSLR and “edited it on a seven-day free trial of Adobe Premiere.” Friends convinced him to focus more on directing, which he did on the subsequent Henny Penny. After that, D’oyen felt ready to have a budget (albeit a tiny one, partly crowdfunded and partly self-financed) and a skeleton crew, shooting Lollygag over two half-days and then another day. Of that film’s origins, D’oyen recalls a lockdown preoccupation: “There was this one neighbor directly across [from] my window. Their bathroom window had foggy glass. Almost every night before I went to bed, I would watch and they would be taking a shower. I felt kind of pervy watching them, but they knew that they could be seen—this was a couple that would almost always shower together. They know they’re being watched, so it made me feel a little less bad watching.”

D’oyen says his next short, Nepotism, Baby! “should be shot this fall, pending all the grants coming in. It started out as a way for me to get out my anger about the inaccessibility of the film industry but very quickly became a bizarre, absurd and sardonic portrayal of this one particular girl whose nepotism is failing her and the ridiculous lengths she goes to to try to get fame. She develops a penchant for setting fires on the Upper West Side, and then arson is not enough.”— VR/photo by Matthew Roveto