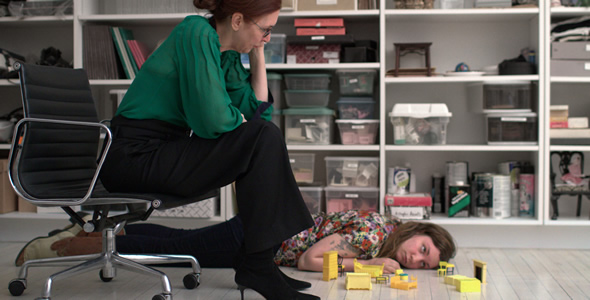 There is a strange space between when you leave school and when you begin work. You are idle as a painted ship upon a painted ocean. You grow restless. You cannot go back and are uncertain how to proceed. “Tiny Furniture” is about Aura, who is becalmed on that sea.

She has graduated from college in Ohio, and returned home to live in her mother’s loft in Tribeca. Her boyfriend called it quits; he had to return home to Colorado and see about the spirits of his ancestors, or something. Four years of education have left her with one video on YouTube and the ability to show approval when a guy says he’s reading The Road by Cormac McCarthy. Her mother is a famous artist who makes a lot of money selling photographs of tiny furniture, sometimes in the same frame as the feet and legs of Nadine, Aura’s sister, who is taller, thinner and younger than Aura.

Aura (Lena Dunham) is discontented. She hates living at home but has no money to move out. She wants a good job but takes one taking reservations at a restaurant. She wants love and acceptance, and finds it much diluted by her distracted mother (Laurie Simmons) and her competitive sister (Grace Dunham). Of possible boyfriends there are: (1) Jed (Alex Karpovsky), a “big deal on YouTube,” who rides a mechanical pony while reciting Nietzsche, and (2) Keith (David Call), who works at the restaurant and has a girlfriend but asks Aura out and then stands her up.

*Lena Dunham got her start making YouTube videos, but she emerged as a major talent thanks to the breakthrough success of this exceptionally sharp comedy, which garnered the twenty-four-year-old writer-director-actor comparisons to the likes of Woody Allen.

*The filmmaker herself plays Aura, a recent college graduate who returns to New York and moves back in with her mother and sister (played by their real-life counterparts).