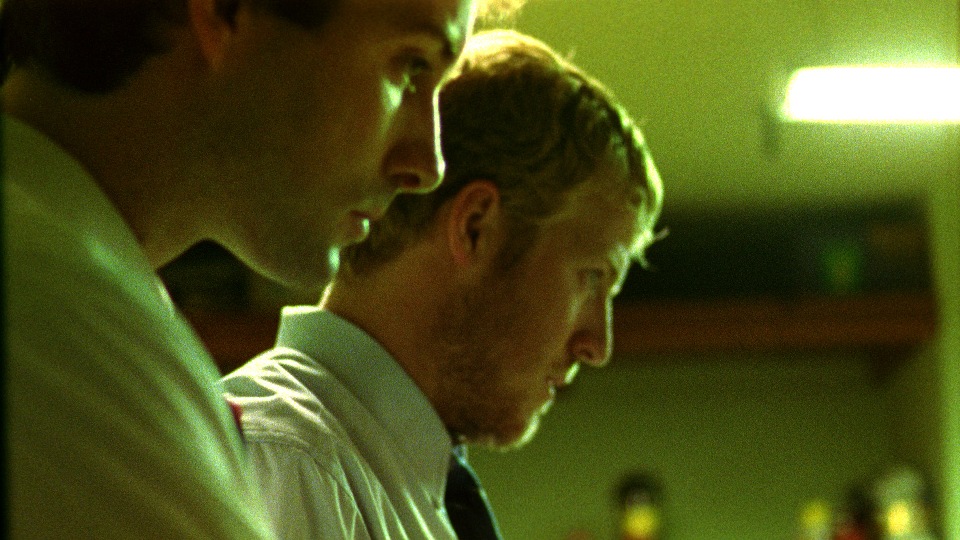 Shane Carruth’s “Primer” opens with four techheads addressing envelopes to possible investors; they seek venture capital for a machine they’re building in the garage. They’re not entirely sure what the machine does, although it certainly does something. Their dialogue is halfway between shop talk and one of those articles in Wired magazine that you never finish. We don’t understand most of what they’re saying, and neither, perhaps, do they, but we get the drift. Challenging us to listen closely, to half-understand what they half-understand, is one of the ways the film sucks us in.

They steal a catalytic converter for its platinum, and plunder a refrigerator for its freon. Their budget is so small, they could cash the checks on the bus. Aaron and Abe, agreeing that whatever they’ve invented, they’re the ones who invented it, subtly eliminate the other two from the enterprise. They then regard something that looks like an insulated shipping container with wires and dials and coils stuff. This is odd: It secretes protein. More protein than it has time to secrete. Measuring the protein’s rate of growth, they determine that one minute in the garage is equal to 1,347 minutes in the machine.

Is time in the machine different than time outside the machine? Apparently. But that would make it some kind of time machine, wouldn’t it? Hard to believe. Aaron (Shane Carruth) and Abe (David Sullivan) ponder the machine and look at their results and Aaron concludes it is “the most important thing any living being has ever witnessed.” But what is it?

*One scene that did not make the final cut showed that Abe was diabetic. The shot, which showed him taking time out of a conversation because he needed to give himself an insulin injection, was intended to establish that the circumstances of Abe’s life have taught him to be careful and methodical.

*Shane Carruth stated that at most an 80 minute could be made from the footage (the film was 78 minutes). He stated that the shooting ratio was 2:1.

*The budget for the entire film was around $7000. Most of the money was spent on film stock.

*The device in the movie is a person-sized, metal box that hums. One scene features Abe and Aaron standing behind some trees, as they watch themselves enter a U-Haul Storage facility. This scene was filmed in Carrollton, TX (a suburb of Dallas, TX), and in 2005 these trees were cleared to build a Hummer dealership.