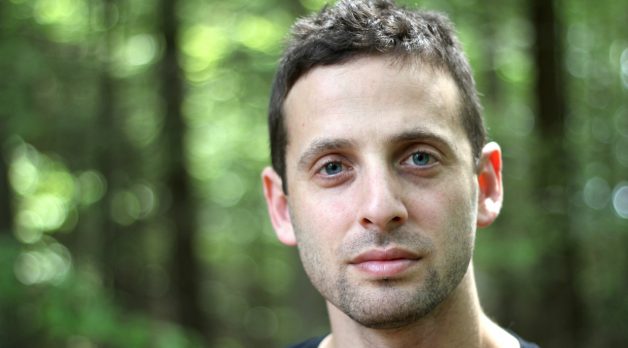 Tom Rosenberg’s short films are spooky and spooked, lucid recordings of events that can be seen but never fully processed. In three short films made during his time completing a master’s in filmmaking at the University of Texas at Austin, Rosenberg strikes a calmly uncomfortable tone. 2011’s You Don’t Know Me profiles Ace Elliot, a country singer who lives off a rural Texas stretch of the I-35 highway in a house with billboards bearing messages like “Stop the sex outside of marriage.” Mixing footage of Elliot posing proudly next to these displays and head-on camera interviews, Rosenberg recalls the tone of early Errol Morris. 2013‘s Rehearsal records an exercise to train hundreds of EMT teams and firefighters from across Texas for a 9/11-esque catastrophe. Hundreds of people arrive to put on disturbingly convincing prosthetic wounds, wailing for treatment after a bomb “goes off”; the familiar images of mass trauma are both eerily plausible and unnervingly hilarious in their fundamental incongruity. His most recent film, 2015’s Nothing Human, records the testimony of forensic investigator Louis Akin, who discusses his reconstruction of U.S. Army Major Nidal Hasan’s 2009 shooting of Ft. Hood with appalled calm.

All three films, Rosenberg notes, circle around “people who are struggling to define and come to terms with a big trauma that doesn’t totally make sense.” That’s also true of his first short, 2009’s Ñanavira Hamuduruo, made while Rosenberg was in Sri Lanka on a Fulbright fellowship. “I was initially doing some research there about Buddhist epistemology and it required a level of sophistication in Sanskrit and Pali that I just didn’t really have,” he explains. “I ended up discovering this local story about a British monk who had come to Sri Lanka in the ’60s and committed suicide under very strange circumstances.”

After his fellowship was completed, Rosenberg stayed to work for the Organization for Visual Progression, a nonprofit that produced videos for advocacy purposes. For example, he worked with a group “that was advocating against the cultivation of tobacco as a cash crop because of the environmental consequences. We’d train them how to use video and help them produce and finish a five- or six-minute piece that could screen to farmers with a vested interested in the issue to explain why tobacco cultivation isn’t a good thing.”

Though he wasn’t directing, Rosenberg says his year working in Sri Lanka was “formative,” helping him to “learn a lot about the logistical side of filmmaking.” He went to UT to continue learning more about filmmaking’s “nuts and bolts,” and has since worked as a producer, DP, gaffer and camera assistant.

The paid side work led directly to Nothing Human, which, in the last year, has played festivals ranging from Locarno to True/False. Rosenberg’s relationship with Akin began when he answered a Craigslist ad seeking a videographer. “He was doing some kind of seminar about blood splatter, and they were going to go shoot some pigs to demonstrate how the bullets interact with the body similar to the human body,” Rosenberg recalls. Though he didn’t shoot that video, he began going with Akin to crime scenes. “If something has not come out in trial, and is not a matter of public record, he can’t really share that openly,” Rosenberg explains. “He deputized me — I was brought in under his license as an employee of his and issued a private investigator’s license. That allowed him to talk to me about his cases and take me along to crime scenes.” Now technically a licensed private investigator, Rosenberg is in the early stages of developing a feature, “another something in the true-crime realm. I’m just in the research stage now, but I think it will involve a lot of reenactments.” — Vadim Rizov/Photo by Alexander Rosenberg