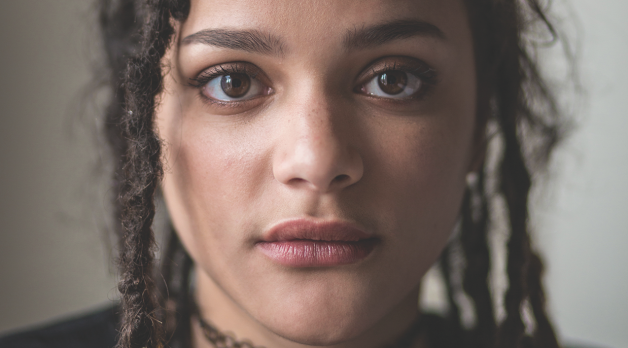 “I was going through such a low point,” Sasha Lane remembers. “I was hopeless, struggling with a bunch of stuff, feeling like something was missing but not knowing how to change things. But I had a feeling that something good was going to happen. It was like there was a little light that was calling, and I didn’t know how to reach it.”

The 20-year-old actress — a riveting natural as the soulful center of Andrea Arnold’s Cannes-honored American Honey — is recalling the week her life entirely changed. Lane, who grew up bouncing between Houston and Dallas, had been studying social work and psychology at Texas State University when she hit that hopeless moment. Her mom sent her to Panama City, Florida, during spring break with some friends, just to “breathe,” when she was spotted on the beach by the British director of such arthouse classics as Fish Tank and Wuthering Heights. In what is sure to become the millennial version of Lana Turner being discovered at a Hollywood lunch counter, Lane was approached on the beach by Arnold, her assistant and casting director. “She said I had a free spirit,” says Lane. “She liked my tattoos and the way I was interacting with my friends.”

Lane was set to leave the next day for SXSW but wound up staying with Arnold for the week, hopping into her car and then improv-ing before a camera with two of the film’s other cast members. Arnold told Lane that she’d be costarring with Shia LaBeouf, and the movie would soon be announced in the press. “I had just seen the ‘Elastic Heart’ video,” she says, “and I was digging his vibe, so I thought, ‘Cool.’”

At the start of American Honey, on impulse Lane’s character, Star, joins a mag crew — a traveling band of youths selling overpriced magazine subscriptions on the road. Her home life sucks, but she’s mostly drawn to the charismatic Jake (LaBeouf) when she spies him tearing up the checkout counter of a Midwestern Walmart to Rihanna’s “We Found Love.” Riley Keough plays Krystal, the crew’s bikini-clad, uber-capitalist leader, and the van they all travel around in is packed with unforgettable characters — mostly real runaways found through street casting mixed in with performers like Heaven Knows What’s Arielle Holmes — but Lane’s Star, with her dreads, tattoos and empathetic mien, is the one Arnold’s camera keeps coming back to. In an early, tour de force moment, Star splits from Jake to hop in the convertible of three businessman cowboys, older white dudes whose eyes are — we can’t tell — either predatory or innocently bemused. The scene gets wild. Star lets out a banshee cry, downs a string of mezcal shots and shoves one of the cowboys in the pool. As she gets more and more wasted, something bad is going to happen, but when that danger comes, it’s not what we’ve been dreading. We quickly realize, Star can take care of herself. As can Lane: “I don’t like to punk out,” she says of the mezcal-fueled scene. “I think I drank two real worms and three fake ones.”

What was the hardest part of the shoot? “It was emotionally exhausting,” says Lane. “There was a point when I didn’t know the difference between my real life and the movie. We were all traveling and living together for two months. You had to get real with these people, the mag crew — it wasn’t fake loyalty. And after the shoot, I was a mess. I couldn’t sit still. I just wanted to be on the road again.”

Since production, Lane moved to L.A., attached herself to a YA action movie, Hunting Lilah, and has gone out on a few auditions, but has mostly been “sitting by the window writing my poetry.” And, of course, waiting for people to see her work in American Honey when A24 releases it this September. “It’s been hard,” she admits. “I don’t know what my next five seconds are going to be. But I’m just trying to be part of this world for the art of it — that’s all I have, and all that I can connect to.” — Scott Macaulay/Photo by Richard Koek