The Wanted and the Ones Who Want: Financiers and Distributors Offer Advice at IFP Film Week 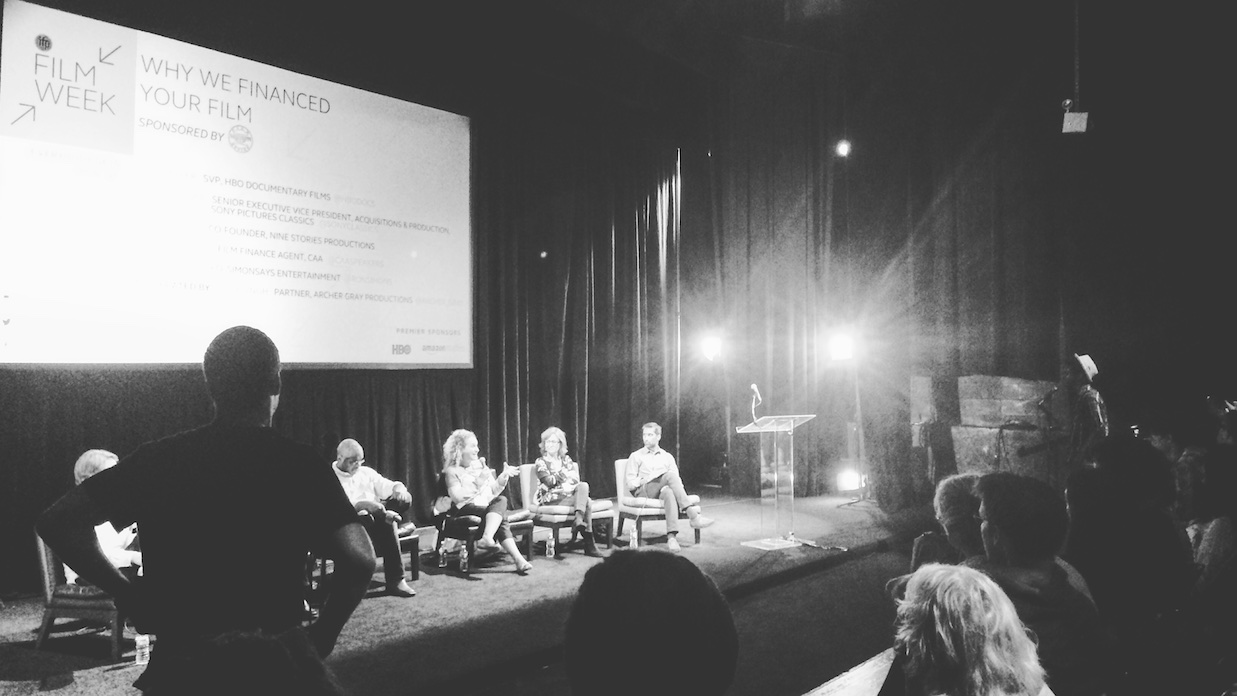 The "Why We Financed Your Film" Panel at IFP Film Week.

Before IFP Film Week fades too far in our rearview mirror, we’re elaborating upon several of our snaps from our Instagram feed with further comments by the filmmakers, speakers and panelists. View all of Meredith Alloway’s Instagram diaries here at the link.

The financiers are the wanted. The people looking for financing are the ones who want. That’s always been the dynamic, the power play. And no matter how genius you are, how many people support you creatively, how many outstanding New York Times reviews you get, you still someone to believe in your next film and give you money to make a movie.

But that certain dynamic did not appear as black and white on the “Why We Financed Your Film” panel at IFP Film Week. This was the most packed panel I went to during the entire conference. I looked around at everyone’s body language: hunched forward, notebooks out, pens in mouths; ready. “We’re weary of missing opportunities,” said CAA film finance agent Adam Paulsen. Across the board, all of the panelists were open about their need not only to find new creators and projects, but to find them now and at the beginning rather than just at the peak of their career.

Below are the panelists and a bit about who they are and what they’re looking for. All of them are viable people to connect with — if not now in your career, down the road.

Adam Paulsen (Film Finance Agent, CAA): Paulsen said that at CAA, it’s better for them to get in at an earlier stage and that they “prefer to have a director on board.” Paulsen was also adamant about sending along a script more than once. So many emails flood inboxes these days that following up about your projects or sending it at different stages, isn’t a bad thing. As far as pre-buys go, Paulsen explained, “People are going in earlier” and that there were 10 pre-buys this year before the Toronto Film Festival. Developing a relationship with a film finance agent early on, even if you haven’t won Cannes or premiered at Berlin, seems more plausible now than in the past.

Dylan Leiner (Senior Executive Vice President of Acquisitions & Production, Sony Pictures Classics): Leiner agreed that over at Sony Pictures Classics, they’re even looking at projects at the script stage, not just finished products for distribution. They picked up Inside Job, the 2010 film by Charles Ferguson, after reading a three-page treatment. Leiner said that they look for projects where there’s a “need in culture and the public to understand” them. “It’s a business model about trying to embed the film” into the culture. For him, Inside Job could do this, and Ferguson already had amazing access. Above all, Leiner was adamant about preserving film culture in today’s rapidly growing digital realm. SPC is looking to foster films that are right for the movie theater. Wow, was this refreshing after all the talk of digital content.

Lisa Heller (Senior Vice President, HBO Documentary Films): Heller was very clear about eliminating the line between fiction and non-fiction; narrative and documentary when it comes to storytelling. HBO is one of the most exciting places for a film to land these days and they are involved not just as a distribution platform. Heller was open about her passion for cultivating projects in an intimate way. She’s been behind a number of incredible docs over the past decade, like Becoming Mike Nichols, Everything is Copy and Saving Face, which won the “Best Documentary, Short Subject” Oscar in 2012.

Ron Simons (CEO, SimonSays Entertainment): Simons cultivated Blue Caprice, a solid film at Sundance a few years ago that was Alexandre Moors’ feature directorial debut. Recently, he brought money to a “Chekhov project” because he liked the playwright. Upon Googling, it’s The Seagull with Saoirse Ronan and Annette Bening. Simons also was open about his mission to find creators sooner than later in their career. He discussed the surplus of content out there and that he’s looking for projects that rise above. “It makes us drive harder,” Simon says about his teams’ search for the right project.

Riva Marker (Co-founder, Nine Stories Productions): Marker was a producer of Beasts of No Nation. Now, she runs the production company Nine Stories with Jake Gyllenhaal. They’re making Jeremy Saulnier’s next movie (he did Blue Ruin, Green Room). They’re also the production company behind Paul Dano’s directorial debut, Wildlife. They’re looking for movies in the $10-12 million range. I went up to her after the talk. I had chatted with her as a journalist a while ago, and she was lovely. I figured, why not say hello, touch base about some projects I have. You never know with these interactions, though. If you’re going to approach someone as a lone wolf, you better have an incredible script or an army of legit collaborators behind you — at least that’s what I’ve gathered. I just had a sticker with my short film’s logo on it — you never know.

Being surrounded by a room full of people who are leaping to meet these panelists, wasn’t the most relaxing experience; again, the wanted/wanting dynamic. But, a phrase my theater teacher once told me after doing a Joan of Arc monologue kept coming to mind, “Remember, they want you to be good.” They want you to be good. They are weary of missing opportunities – which include you. Perhaps the artist has more opportunity now than ever. Technology has gifted us with accessible ways to showcase creations. With the “wanted” so eager to find new voices, it seems nothing but appropriate to utilize these accessible platforms for your work and aim to get on their radar — the sooner the better.