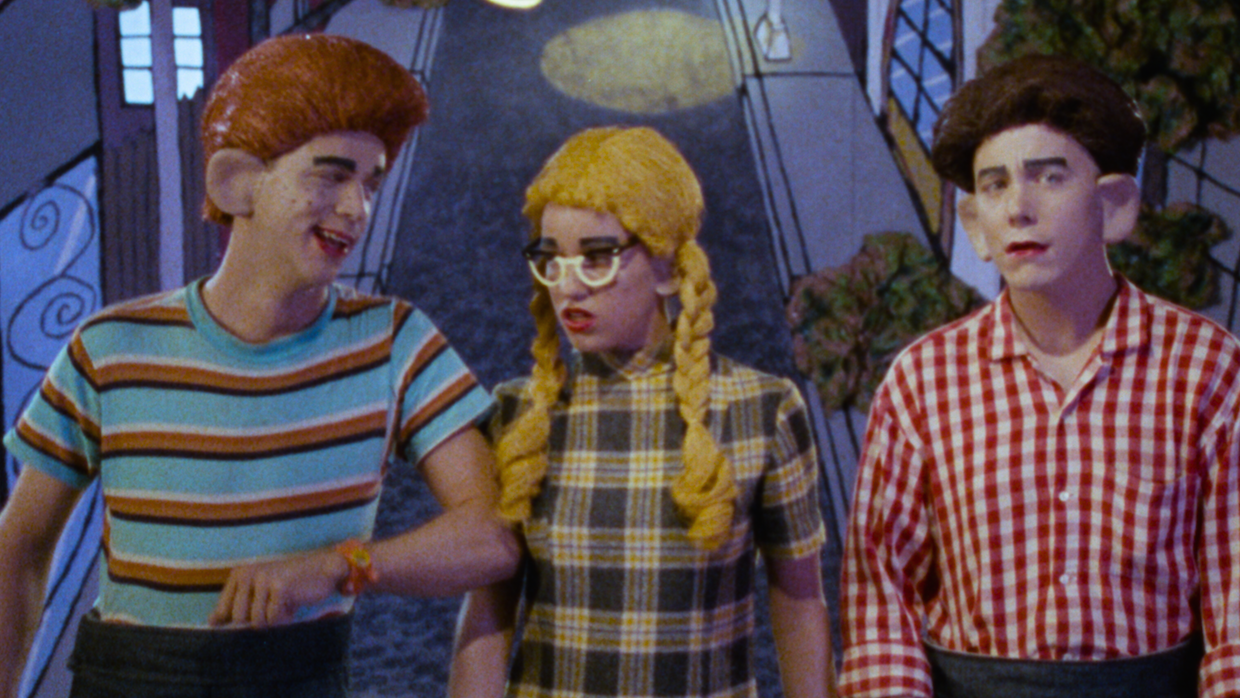 He Was Once (Photo courtesy of IndieCollect)

“I want to make films on the other side of fashion, on the other side of taste,” whispers a melancholic starlet into a velvety black void. It’s the 1930s, and the alluring actress — known in Europe as “La Divina” — has been brought to Hollywood to vamp in commercial confections alongside an American matinee idol. She doesn’t fit in. She wants to play real roles, like Dorian Gray or Christ. Her nervy agent is bewildered. “That’s art!” he scoffs. “Who’s gonna to pay for that?”

Brooke Dammkoehler’s 45-minute La Divina (1989), a buoyant pastiche of Golden Age melodrama by way of Fassbinder, gives us a campy, impressionistic biopic of a Garbo-like figure (played by Michelle Sullivan) who ascends to Hollywood super-stardom only to become disillusioned with the patriarchal studio machine. Stylish and self-aware — its lush black-and-white photography and sly production design cannily evoking the era on a shoestring — it’s also a remarkably confident piece of filmmaking from a complete unknown.

Made under the auspices of Apparatus Productions, the nonprofit production company founded in 1987 by producers Barry Ellsworth and Christine Vachon and director Todd Haynes, its theme of an artist-outsider resisting a world corrupted by commercialism now reads as commentary on the idealism and anxieties fueling independent cinema in the 1980s. La Divina is among seven nearly forgotten 16-mm shorts produced under the short-lived but influential Apparatus banner, which championed films fusing an avant-garde ethos with highly personal narrative filmmaking.

Long out of circulation, La Divina and the six other Apparatus films are back thanks to the heroic efforts of IndieCollect. Spearheaded by Sandra Schulberg (founder of IFP, Filmmaker’s publisher), the nonprofit initiated a 4K digital restoration project of the films after a successful Kickstarter campaign last summer. Many of the original film elements had been discovered among the orphaned prints at DuArt, New York’s legendary film laboratory that closed its photochemical division in 2010. (IndieCollect has rescued nearly 3,500 prints in total and is in the process of identifying and returning them to owners.)

Ten restored Apparatus films will screen this December in “Gems Unseen,” a two-part series at New York’s Metrograph Theater. In addition to La Divina, included films are Suzan-Lori Parks and Bruce Hainley’s queer allegory Anemone Me (1990), Susan Delson’s conceptual whatsit Cause and Effect (1988), Mary Hestand’s sublime anti-parable He Was Once (1989) and Larry Carty’s caustic race satire Oreos With Attitude (1990). Folded into the mix are two films directed by Ellsworth and three by Vachon made prior to Apparatus. These include Ellsworth’s Tommy’s (1985), starring a young Steve Buscemi, and Vachon’s first directorial effort, A Man in Your Room (1984).

Together, the 10 Apparatus films offer a window into a particularly fertile moment of DIY indie film history. “Apparatus was our reaction to what seemed to be happening … at this time,” Haynes explained to critic Scott Macdonald in a 2008 Film Quarterly interview. Steeped in semiotics and feminist film theory, the company’s founders and filmmakers wanted to tell stories that engaged with commercial genres and referenced pop culture. “We began to think of ourselves as experimental narrative filmmakers,” said Haynes. But in order to make the movies they wanted to make, the Apparatus filmmakers needed something ’70s avant-garde practitioners never had: a crew.

Drawn to the punk and East Village art scene, Ellsworth, Haynes and Vachon, who met at Brown University, migrated to New York in the early ’80s to make movies. Haynes soon began work on what would become Superstar: The Karen Carpenter Story (currently being restored by the Sundance Institute). Vachon, meanwhile, gained production experience working on Bill Sherwood’s groundbreaking gay drama Parting Glances (1986). When Ellsworth received some private backing to start a nonprofit aimed at financing and producing short films, the trio joined forces and Apparatus was born.

It filled an essential gap. Young filmmakers straight out of school had little hope of winning the big grants. And if they did, they often lacked the network and financial knowledge to make the most of the money. As the name implies, Apparatus was about providing the tools.

Advertising in New York’s downtown film haunts, the trio solicited scripts and selected projects with the help of outside advisors. They cast a wide net beyond their circle of film friends and received 50 applications in the first year. The projects they selected display a wild variety of approaches. It speaks to a moment when the arts were more fluid and a figure like artist, writer, performer and curator Coco Fusco could serve on the board of a film nonprofit. “We were conscious of diversity, even if it wasn’t a mandate,” Vachon suggested. “We just kind of did it — women and people of color.” Budgets were often well below $20,000 (half of which went to film costs), and Ellsworth, Haynes and Vachon traded various behind-the-scenes roles for each production.

“It didn’t occur to us to make [the films] for commercial purposes,” Vachon told me when I asked her about their ultimate intent. “We were going to make these films because we felt they should be made. Because they would be cool, interesting things unto themselves.”

It wasn’t just an aesthetic mission to subvert Hollywood tropes, either. Apparatus was also a political statement. “AIDS was such a huge backdrop to our lives and gave a sense of urgency to everything we did,” recalls Vachon, who along with Haynes was an active member of ACT UP. “If you had a story to tell, you had better tell it now.”

That urgency and all-out commitment to personal vision is especially evident in Apparatus’s most original works. Mary Hestand’s He Was Once is a prime example. Nothing quite prepares you for its gloriously perverse delights. Taking aim at the nuclear family in the Reagan era, this feverish parody of Davey and Goliath (an animated TV series produced by the Lutheran Church) features off-kilter sets, actors in prosthetics (including Todd Haynes), delirious dream sequences and dubbed dialogue. It’s a fully imagined world of sweet weirdness. As per one astonished viewer, He Was Once feels like “David Lynch just checked in at Pee-wee’s Playhouse.”

No less affecting is Susan Lori-Parks’s tender, absurdist tale of a young black man’s sexual awakening with a merman on the rocky shores of Maine. Anemone Me is close in spirit to the Pulitzer Prize-winning author’s plays, and it raises an interesting fact about the Apparatus project as a whole. Despite the quality of the work, the films didn’t travel much. (Oreos With Attitude was one exception, as it played at New Directors/New Films in 1991.) And despite obvious talent, few Apparatus filmmakers went on to have careers in the arts let alone film. A great first film is no guarantee against life’s serendipity.

For Haynes and Vachon, however, Apparatus was a kind of crucible, even if they weren’t writing and directing their own films. “Apparatus gave me the confidence about how to make movies so that when Todd wanted to make Poison, I said, ‘Yes I’ll produce,’” she explained. It’s perhaps no coincidence that Poison, the duo’s first feature-length collaboration, is composed of three short films in three different genres. And their subsequent projects up through 2007’s I’m Not There continued Apparatus’s pop approach to deconstructing narrative cinema.

What is often overlooked or downplayed in the history of so-called American independent cinema is that most of the trailblazers were preeminent stylists. Before low-key realism became a cliché in contemporary indie filmmaking, directors like Spike Lee, Jim Jarmusch, Marlon Riggs and Susan Seidelman (and many others) employed cinematic artifice in arresting ways. They wielded personal style with authority, using it to say something fresh. Style wasn’t just attitude; it represented a way of being in the world.

Rediscovered today, the Apparatus films are a small reminder that style matters, and filmmakers need support to develop and display that style. Ellsworth, Haynes and Vachon saw their writer-directors as artists. Instead of studio space, they gave them a production team. It may seem like a simple idea now, but today’s filmmakers — “storytellers” in the diffuse parlance of the digital era — should remember: Artists are here to fuck things up, and to do it in style.