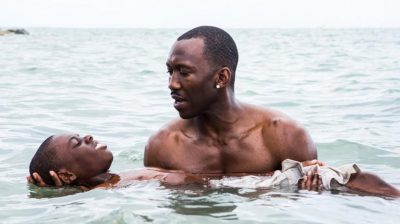 Our new “Recommended on a Friday” column is meant for us here at Filmmaker to throw some attention on films we love that perhaps we haven’t covered online and in print, but this week we’re just going to start by piling on a pick that you’ve already heard quite a bit about: Barry Jenkins’s Moonlight. Jenkins’s previous film, Medicine for Melancholy, was a Filmmaker cover back in 2009, and we’ve been eagerly awaiting his next film since. Moonlight — a bracingly tender, ambitiously realized and wisely provocative character study about the construction of African-American masculine identity — demands to be seen in a theater. And, to send a signal about the kinds of films we want to see more of, it demands to be seen this weekend. In the current issue of Filmmaker, Brandon Harris writes:

Occasionally a movie has the look and feel of something totally original, immediately allowing one to see the protean leap its maker has taken from novice to master. Someday, when the American movie landscape is no more, simply the purview of art historians who live on Mars or on ocean front property in what we used to call Indiana, people will still regard Barry Jenkins’s startlingly effective Moonlight as a unique and supple flower, the kind of heartrending experience that gives rise to the notion that motion pictures can be a lasting, emotionally resonant art form. Drawn from MacArthur “genius” Tarell McCraney’s lauded play In Moonlight Black Boys Look Blue, the American cinema has never produced anything even remotely like Moonlight.

Also in our new issue is Italian documentary filmmaker Gianfranco Rosi, talking about his celebrated Fire at Sea with fellow filmmaker Roberto Minervini. An immersive documentary on the refugee crisis in Lampedusa, Fire at Sea is the product of the director’s extended time on the island with a small handheld camera. Writes Vadim Rizov in his introduction: “The film leaves a mark without using the usual leavening devices — talking heads, graphics giving numbers and statistics, underlining music for emotional emphasis — that would make it merely well-intentioned agitprop; it’s art made under the most grueling of conditions.”

Ti West is a favorite here at Filmmaker, having made our cover several years ago with The Innkeepers. He’s back now in theaters with what seems like a step out of his traditional horror genre, but In the Valley of Violence, a Western revenge picture, contains all the things we look forward to in a West picture: a slow-burn drama, dark comedy, and masterful mise en scene. Ethan Hawke stars as a weary gunslinger just trying to pass through town without much trouble, and John Travolta is the town’s boss who becomes his reluctant antagonist when his goons kill the gunslinger’s dog. Said West when we interviewed him upon the film’s SXSW premiere:

For me, the western is the most classic genre of American cinema. It feels completely ingrained in the cultural history of American filmmaking, and I really wanted to be part of that. After The Sacrament, which was sort of an experimental, new-media style of filmmaking, I wanted to make something that felt more like traditional cinema, and wasn’t as focused on such utter realism. I also really love the absurdist nature of many great spaghetti westerns, and while I think In a Valley of Violence has plenty of those fun elements, it also tells a story about how violence affects different people in different ways. It is a movie much more about characters than it is plot. It takes a group of archetypes and sorta flips them upside down and forces the characters to confront things not usually seen in westerns. Playing around with genre tropes is what I get a kick out of as a filmmaker. As far as calling it a “pure western” in previous interviews, that is mostly me just trying to let people know that it’s not secretly a horror-western. I think my previous films and the Blumhouse brand might make people assume there is a horror element included somehow when there really isn’t. I just want people’s expectations to at least be accurate before going in.

The most striking piece of filmmaking I encountered this week was a powerful music video for L.A. based trio Dessert’s Devil/Back Around. Director Alex Lill takes the band’s richly textured track, which juggles an impressive variety of tones and styles in the space of five minutes, and uses it as the basis for an equally ambitious short film that is poignant, disturbing, lyrical, and jarring in equal measures. To describe it in too much detail would be to rob the viewer of the video’s many visual (and aural) delights and surprises, so I’ll just say that if you have a few minutes to spare, check it out here.

This week also sees the streaming premiere of an unjustly forgotten political satire, writer Larry Gelbart’s hilarious, frightening, and sadly relevant 1992 cable film Mastergate. Adapted by Gelbart from his own play, Mastergate brilliantly skewers Washington power brokers’ manipulation of language to nefarious ends; the “Select Joint Congressional Committee Investigating Alleged Covert Arms Assistance to Alleged Other Americas” at the center of the piece allows Gelbart to dig into both the absurdity and the grave repercussions of political deception as embodied in the McCarthy hearings, Watergate, Iran-Contra and beyond. The movie aired on Showtime a few times over 20 years ago and then vanished into obscurity; today it reemerges on Vimeo’s On Demand portal. iTunes and Amazon releases are set for November.

Finally, I’d like to put in a word for two new Blu-ray transfers of beloved films. At this point, Richard Linklater’s Boyhood and Robert Altman’s Short Cuts hardly need me or anyone else to bang the drum for them, but the excellence of Criterion’s special edition releases is worth noting. Short Cuts looks and sounds the best it has since its 70mm release prints back in 1993, and Boyhood is crammed to the hilt with extraordinary special features that offer both utilitarian filmmaking lessons and profound analytical insight. Michael Koresky’s video essay on the significance of time in Linklater’s work singlehandedly justifies one’s purchase of the disc, but there are also hours of fascinating making-of documentaries and interviews that make Boyhood one of the best packages Criterion has ever released – which means it’s one of the best DVDs anyone has ever released. — Jim Hemphill

When Chris Gethard was a college student in New Jersey, he’d commute into New York just for the comedy oasis of the Upright Citizens Brigade Theatre. Gethard returns to his early days as a young comedian at UCB in his latest one-man show called Chris Gerhard: Career Suicide, currently playing a limited run at The Lynn Redgrave Theater. In the performance, he describes his younger years escaping into comedy to offset his depression, how he concealed feeling suicidal for years, how he’s struggled with therapists, medications, substance abuse, and close relationships. Gethard is most memorable to me from his work in the longform improv group at UCB, The Stepfathers, for his tendency to break character and giggle through sketches. Though this latest show feels particularly poignant as a contrast, Gethard is that same comedian, remarkably more exposed on a personal level, but as endearing of a performer on an entertainment level. — Taylor Hess.