Welcome to the Working Week: On Paterson and Groundhog Day 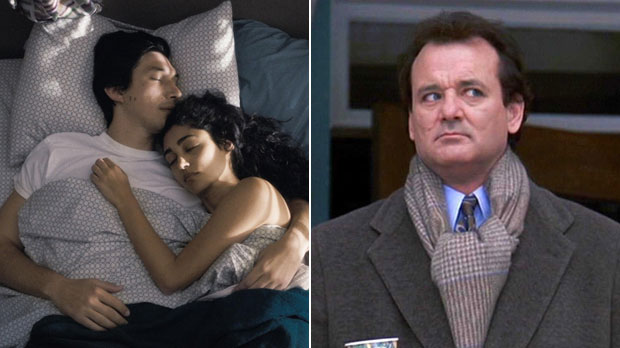 by Soheil Rezayazdi
in Filmmaking
on Jan 9, 2017

Every day begins the same: We wake up. Usually in a bed, often by an alarm. Sometimes a pet gets me, or a slice of sunlight, or the shrill beeps of a garbage truck. I awake with a slow fade, or maybe a jolt, or perhaps only after a series of false starts. We can delay our rise from bed, but the inevitable remains: A full day of consciousness awaits us. How will we use it? How do we live life so we can live with ourselves?

For Phil Connors, he awakes at the strike of 6:00 AM to the sounds of Sonny and Cher on his bedside clock. He doesn’t do this by choice. Phil is trapped in a time loop, which forces him to relive the same mundane day for eternity. He’s stuck with February 2 in Punxsutawney, Pennsylvania, a small town transfixed by a groundhog — also named Phil.

“What would you do,” he bemoans at the bar, “if you were stuck in one place, and every day was exactly the same, and nothing you did mattered?” Most of us don’t have to wonder; we call it the workweek. At least we get paid.

Five days a week, Paterson’s life unfolds much the same way. His mornings begin at 6:15 AM, give or take, when his inner clock nudges him awake. Paterson eats his cereal, drives the city bus, writes poetry over lunch, has dinner with his wife, walks the dog, and washes down the day with a pint at the local bar. We watch him go about this routine, without variation, for a full week. His world doesn’t extend outside his city — also named Paterson.

He’s stuck. Every day’s the same. And unlike Phil, he has no complaints.

Jim Jarmusch’s Paterson arrives in theaters now as the genial, spiritual cousin of Groundhog Day, the 1993 modern classic on rebirth through repetition. Both films are, in essence, guidebooks on how to find peace with the lives we lead. They’re cinematic antidotes to the phrase “same shit, different day.” These are films that slow life down, that isolate its routines and everyday moments so we can see them anew. Jarmusch and Harold Ramis remind us that every interaction, no matter how mundane, offers a chance for personal growth — if, that is, we can learn to stop sleepwalking through them all.

As working men, Bill Murray’s Phil and Adam Driver’s Paterson strike very different poses. Phil strolls into Punxsutawney with the airs of a big-city media celebrity. He’s there to report on the town’s Groundhog Day festival, a job he sees as clearly beneath him. Phil refers to himself as “the talent,” denigrates the locals as hicks, and demands to stay at a nicer hotel than the rest of his crew. He’s a TV weatherman — the very definition of a “local celebrity” — but he carries himself with delusional superiority. He treats it all as a joke: his job, his coworkers, the town.

Once the film’s conceit kicks in and Phil starts to repeat the same day, he only grows crankier and more above-it-all. It takes him most of the film to realize he’s been given a chance to perfect himself, day by day. By the film’s end he transforms into a figure not unlike the leads of Jarmusch’s Only Lovers Left Alive. Blessed with immortality, he uses his endless days to consume and create art. He learns to appreciate French poetry and play the piano, but it takes him nearly 90 minutes to get there. He greets his situation in distinct stages: first grief, then hedonism, lust, nihilism, and finally, only after he’s exhausted his pleasure centers, self-betterment. For most of Groundhog Day, Phil and his ego can’t handle the thought of reliving the same workday in an unfashionable small town. His life could never be so…ordinary.

Paterson, meanwhile, doesn’t have a narcissistic streak to speak of. He lives in a post-industrial New Jersey town and works a job that Phil Connors couldn’t handle to save his life. There’s no room for vanity as a bus driver. Like a lot of the jobs we hold, it doesn’t come with much glory. You tend to only get noticed when you fuck up.

Paterson writes poetry throughout the day, not so much as a millennial “side hustle” but as a low-stakes creative outlet. He shares his poetry with only his wife, who has her own artistic pursuits, and she urges him to get his words published. But Paterson appears driven by modesty, not ambition. He’s happy to drive the bus — what better place to soak up odd bits of local color? — and write in his spare moments. The déjà vu-inducing routines of the workweek don’t paralyze him; of all places, it’s where he thrives.

To put it simply, Paterson has achieved the inner peace Phil Connors struggles for most of Groundhog Day to attain. Which is another way of saying Paterson doesn’t have much in the way of conflict. Driver’s character does have doubts, but for the most part he lives as a contented husband, coworker, citizen, and poet. His story is an inversion of Phil’s: He likes living in an unglamorous city; he likes his job; he likes stability. He doesn’t require an alarm to prod him out of bed every morning. He just wakes up and goes about his day, an unpretentious everyman. Paterson lives where Phil Connors’ story ends, happily ever after.

Jarmusch and Ramis visualize the passage of time, and the day-to-day monotony of work, in similar ways. Both directors repeat images to signify the start of a new day: We get the same overhead shot of Driver and his wife in bed each morning in Paterson, the same close-up of the alarm clock striking 6:00 AM in Groundhog Day. Both repeat the daily nuisances that grate on our protagonists: the crooked mailbox with Jarmusch, the slushy pothole with Ramis. And both populate their films with a cast of town-folk our protagonists meet at the same place every day: the needling Ned Ryerson and the homeless man in Groundhog Day, the sad-sack at the bar and the overstressed coworker in Paterson. The drama, if you can call it that, stems from how these interactions vary from day to day. We chart our leads’ growth (or lack thereof) based on how they handle these encounters from one day to the next.

To this end, Paterson and Groundhog Day mine our everyday moments for spiritual meaning. Many have noted the strong religious connotations of Groundhog Day. Buddhists, rabbis, and priests have all found affirmations of their faith in the film. Phil’s dilemma illustrates how physical pleasure not only leads to a spiritual dead end — it also gets downright boring. Phil greets his superpower like a giddy teenager: he robs banks, beds women, and gorges himself on food. His actions have no consequences, so why not? But hedonistic thrills dull over time, especially when satisfied ad nauseum. Like a kid in a candy store or me at an open bar, he learns the body can only handle so much. He finds salvation, after years of flailing, through altruism and self-enrichment. His curse lifts when he learns to respect the people around him and use his consciousness to its full potential. Sex, booze, and money trigger a dopamine rush, but they don’t give him a reason to get out of bed each and every morning.

Jarmusch builds on these very ideas with Paterson, a character who embodies how to live as a decent human being. Unlike Phil, Paterson’s daily loop isn’t something he needs to break. By film’s end, he reaffirms his commitment to the poetry of everyday life, like a wedding vow renewed. He’s found a way to work within the confines of the workweek to create art, be present, show kindness and have a happy home life. His world, as crafted by Jarmusch, is an idyllic one; even when a gun shows up it’s a fake. As he did with Detroit in Only Lovers Left Alive, Jarmusch has created an alluringly romantic vision of life in a post-industrial American city (in part, I suspect, to encourage young artists to live somewhere outside New York, L.A., or San Francisco). His film calms the nerves of restless artists everywhere. You may find yourself devoting 40 hours a week to a day job, but that doesn’t make you any less of a poet, a painter or a person.

Jarmusch and Ramis are exploring the same question here, the one I posed up top: How do we live life so we can live with ourselves? They arrive at the same conclusion, one by way of high-concept comedy, the other by way of plotless meditation. To get through life we need to give a shit, every day, especially during those hours we’d rather skip.