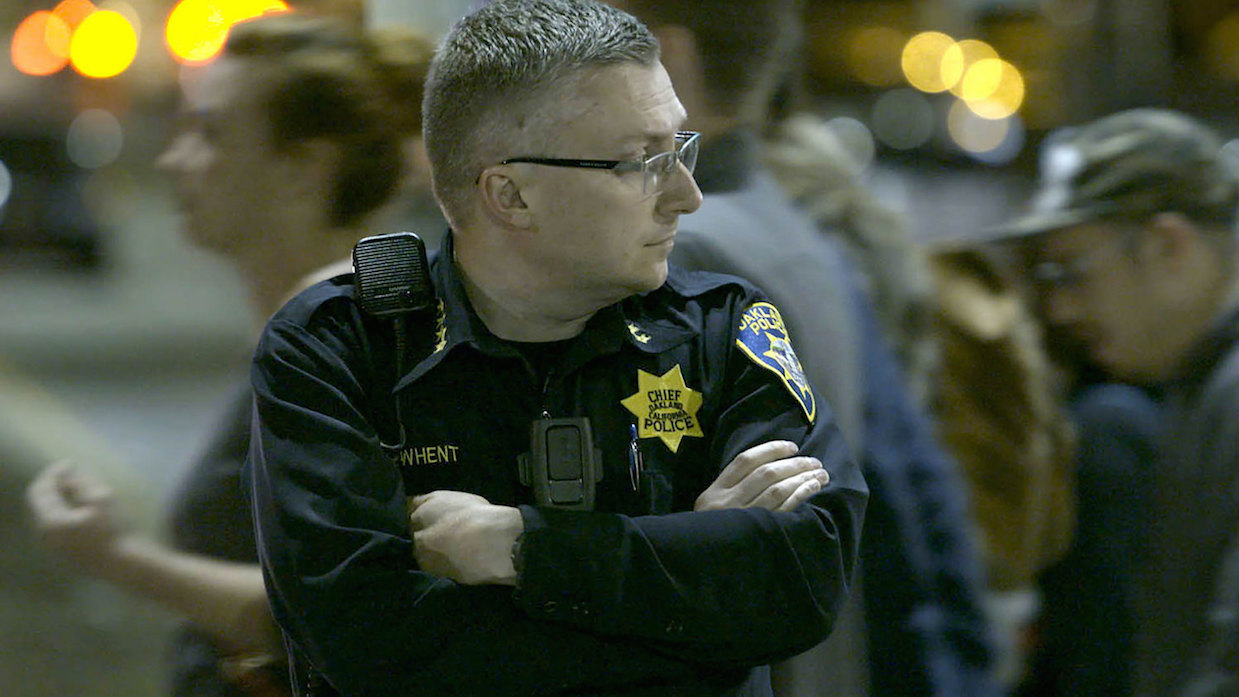 One of my least favorite ways to describe a movie is as a “meditation on” love/time/memory/death/etc. (It’s always some heavy abstract thing, never, say, “a meditation on Doritos.”) I guess Michael Almereyda is on the same page, per his introduction to this morning’s screening of Marjorie Prime. “It’s been described as a meditation,” he cracked. “I hope it’s not. It’s a movie.” Specifically, it’s a heavily modified adaptation of Jordan Harrison’s play, customized to fit the ever-adventurous Almereyda’s tastes and frames of reference. The premise is both simple and tricky: in the future, your deceased loved ones can be brought back as holograms for company. Marjorie (Lois Smith), aging and losing her memory, has her late husband Walter (Jon Hamm), eternally in his 40s, for company, a development which makes her daughter Tess (Geena Davis) a little nervous. From this low-key sci-fi premise, Marjorie gets complicated — best to keep the rest under wraps.

The champion of unorthodox filmings of plays was Alain Resnais, who often heightened the theatricality and artifice of his sets. Almereyda goes the opposite route in some ways, but the spirit of late Resnais (e.g. Melo, You Ain’t Seen Nothing Yet!) hangs heavy — a reference confirmed at the end, in a flashback where young Marjorie and Walter kiss in a museum room surrounded by a 360 depiction of Last Year at Marienbad‘s gardens. One fun thing about Almereyda is that he’s a voracious viewer, so I’ll make some other guesses about potential reference points: the final scene seems directly indebted to the finale of A.I.: Artificial Intelligence. More of a stretch (but anything’s possible!): the first shot is of ocean waves, one of the pet obsessions of the late Peter Hutton, who also shot footage for Albert Maysles’ documentary on Jean-Claude and Christo’s “The Gates,” footage of which is included here.

I mention all this because while I’m not necessarily hypnotized by sci-fi themes and, uh, “meditations on memory,” I’m very interested in whatever Almereyda does — he’s still one of the most unpredictable and still somehow undervalued American filmmakers around. In customizing the play to include his interests and motifs, he’s made a movie that is, indeed, quite moving as a story about people processing loss — something that starts early in life and never ends. He’s also given his performers free rein to be their best. As Walter, Hamm deploys his patented head tilt: head half-cocked like a cocker spaniel, with an expression of perpetual mild bafflement. (A description of the late Walter doubles as a great/loving riff on Hamm: “He had a good, strong jaw, and he was a little too pleased with himself.”) Smith, who starred in the original production, kills it, but the biggest surprise is Geena Davis. It’s actually not been that long since In A World…, but it sure feels like she’s been gone from the screen for a long time. I forgot how much I loved her very particular voice, and she gives a great performance. One scene requires her to only listen to a song, and Almereyda gives Davis her very own Falconetti close-up. It’s a thing of beauty.

Peter Nicks’s super-solid doc The Force covers the notorious Oakland Police Department over the course of two years, climaxing with the infamous stretch where they ran through three police chiefs in nine days (!) due to multiple scandals. The starting premise of the doc was presumably Oakland PD’s ongoing attempts at internal reform (as compelled, please note, by federal authority), which stands in handily for larger, looming concerns about systemic police abuses of authority, killings of people of color et al. Nicks takes a semi-neutral stance, embedding himself within the department, following beat officers and police in training. There are long discussions about the rights and wrongs of excessive force, and what excessive force might be: the scene in which one recruit tries to justify a video showing someone being shot some dozen times isn’t terribly comforting.

One person had described The Force to me as “like a well-directed episode of Cops,” which isn’t terribly fair. There’s, sure, some street action: one scene of the apprehension of a suspect who runs from the arriving officers is seen first from Nicks’s POV, with the camera giving up hope of keeping up with the fast running officer cop and culprit. The suspect is arrested, supporting officers arrive, and the cop on duty explains what happened as the scene is replayed, this time from his bodycam’s footage. This is a smart way of showing a semi-routine arrest both in the moment and then as it’s officially processed afterwards. With one semi-exception, Nicks chooses not to personalize the police, only the administrators above them, which is probably a good move, precluding the possibility of making protagonists out of police who may or may not have been involved in the numerous scandals that occurred over the film’s two years. I do appreciate The Force‘s urgency and thoroughness: if you haven’t been paying attention to police brutality-related news these last few years (and you really should be), this would make for a good synoptic primer. The lesson is summarized by a priest who acts as a community liaison: “The past has run up an incredibly high bill.” And, of course, the past’s not even close to being past.

78/52 is a straightforward doc on Psycho‘s shower scene, fitting into writer/director Alexandre O. Philippe track record of specializing in well-trodden, easily sold pop culture ground (Trekkies in Earthlings: Ugly Bags of Mostly Water, zombie fan culture in Doc of the Dead). The film eventually gets to a detailed, surprisingly/admirably technical close reading of the scene shot by shot (the title is the number of shots/number of setups), but getting there is another story. The opening recreates Marian Crane’s drive to the Bates Motel, which is begging for trouble on a number of levels, not least that the shot style doesn’t match Hitchcock’s, which immediately threw me off. The goal is to emphasize the water pouring down, which is captured in numerous additional shots not in Hitchcock. The water will be an important discussion point later, but it doesn’t seem worth the trouble.

Before the close-read, there’s a lot of generic rhapsodizing from marquee-ish names (Elijah Wood, Bret Easton Ellis, Saw/Insidious screenwriter Leigh Wannell). Most of this information is relatively familiar and the topical engagement is relatively facile: if you’ve ever wanted to hear voyeurism explained for the umpteenth time by Mick Garris, Stephen King’s TV director of choice (The Stand, Bag of Bones), now’s your time. One hardy soul makes the big picture leap to claiming that Psycho‘s scuzzy, anomalous nature anticipated ’60s civil rights et al. turmoil to come, then walks it back, saying he’s not saying Hitchcock “anticipated” this per se but that nonetheless. This is sub-Nixonland history, and cutting to a stock shot of police wielding billy clubs against civil rights marchers isn’t helpful. During these opening passages of largely familiar trivia and topics, without much to focus on I got distracted by the usual tics afflicting docs these days. There is a great deal of busy graphic design/animation, and watching the Psycho screenplay being typed out in “real time” about drove me crazy. Sentences are typed into blank spaces on a page that’s already completed, without being tied to exactly what we’re hearing, as the non-existent camera zooms and whip-pans all over the fake page. It’s too frenetically useless to serve as an improvement over the notorious Ken Burns Zoom. Kindly knock this stuff off.

Once it’s time to actually analyze the scene itself, we get to hear much more from people who are qualified to be insightful about precise questions of blocking and editing. Walter Murch is onhand, as are Sam Raimi’s regular editor Bob Murawski, Hitchcock scholar Stephen Rebello and many others who can dive in there. They’re allowed to be technical and insular in their language: I appreciated learning the term “America cut,” for a sudden cut-in from wide to close-up on the same axis, from Murawski. In fact, I learned quite a bit about the scene, especially from the editors who understand exactly how to articulate its structure. As a one-stop shop for learning a good amount about the film, 78/52 is compact and eventually meaty, anthologizing a number of disparate sources and pieces of information for quicker consumption. But still: this is more a DVD supplement than a movie, closer to Laurent Bouzereau than The Cinema.