“The Moment I Knew We Had Something Special”: Director Joe Piscatella | Joshua: Teenager vs. Superpower 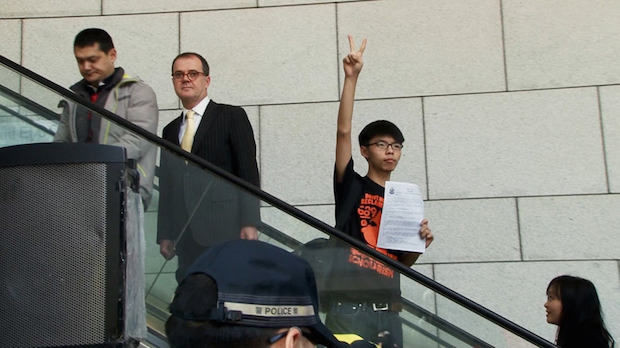 There are two distinct moments a director faces on every documentary production. One is when you sincerely believe that there is no possible way for this story to come together. The other is when you realize that you have something special.

My moment of “how-the-hell-will-this-ever-work” on Joshua: Teenager vs. Superpower hit during my first interview with Joshua Wong, the teenage hero of the film. I asked Joshua to take me back to the day he convinced 13,000 kids to skip school; to that moment where he gave a speech worthy of Braveheart, lead the charge over the wall into government headquarters, and ignited a crackdown of police violence that had never been seen before in Hong Kong.

Me: How did you feel knowing that you lit the fuse on what everyone believed would be the next Tiananmen Square?

Joshua: I was tired.

I pressed Joshua for more. Was he scared for his safety? Worried about his friends being beaten in the streets? Or his parents, whose house was being raided by police?

I deflated. That was not the emotionally charged response I envisioned to match the high-octane footage that had been shot of the event.

A journalist who had interviewed Joshua before told me that he found that Joshua could be digital in his emotions – he was either on or off – and that was the price he had to pay to be a revolutionary leader at such a young age. He reminded me that Joshua had done hundreds if not thousands of press interviews and had been asked every conceivable question. To turn Joshua on emotionally I needed to find questions that forced him to think rather than answer by rote.

For the next interview I stayed up half the night rewriting my questions. I don’t remember exactly how I asked him how it felt to be a leader in the biggest upheaval in the history of Hong Kong. But I’ll never forget his answer.

Joshua: I felt responsible. And that responsibility was too hard for me to bear.

And that was the moment I knew we had something special.